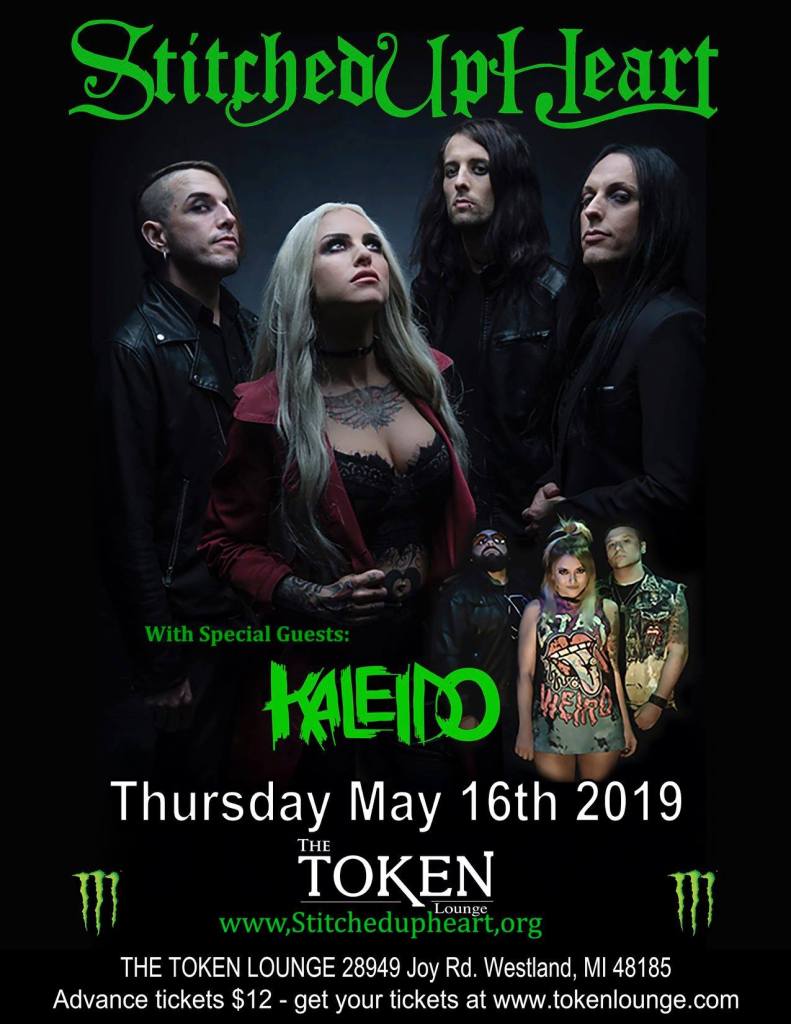 Westland, Michigan (May 16th, 2019) -What a great night for some female-fronted rock bands!! I ran into some technical difficulties (didn’t have as many memory cards as I knew I would need- photographer problems) and wasn’t able to shoot the local openers for the night but was lucky enough to be able to have a few minutes to talk with both Stitched Up Heart’s Mixi and Kaleido’s Christina! The openers for the night were Katharsys Theory, Shadow’s Reflection, Liz Ivory, and ELSIE BINX, all of which are Michigan based and were a great way to kick off the night and get the crowd ready for Stitched Up Heart. Direct support to Stitched Up Heart was Kaleido. Detroit based Kaleido is comprised of Christina Chriss (vocals), Joey Fava (drums), and Cody Morales (bass). They have such great energy and put on a great performance. I also got to talk with Christina before the show so check out that interview below! Finally it was time for Stitched Up Heart! Fresh off tour with Godsmack, Stitched Up Heart definitely knows how to get the crowd going, especially coming from just playing stadium sized shows. This Los Angeles based band consists of Mixi (vocals), Decker (drums), Merritt (guitar), and Randy (bass).  Another band with an insane amount of energy (and hair!), it was easy to see why a band like Godsmack would have picked them as one of their opening acts. I got to talk with Mixi before the show as well, another interview that’ll be posted below! Overall, it was a great night, and I definitely recommend making your way out to see both Kaleido and Stitched Up Heart next time they are in your area!

Splice: Thanks for taking the time to talk with Splice, we really appreciate it! To start off, give me a brief history of the band.

Christina: We formed in 2012 and played our first show at the Roxy in LA. We’ve just been going hard ever since, touring the US, we’ve toured the UK and have been fortunate enough to open and share the stage with some of our idols.

Splice: What are some of your favorite spots you’ve been on tour?

Christina: Ireland, definitely. My family is Irish so that was really cool. I really love touring out west as well because it’s so beautiful and different than Michigan.

Splice: How would you describe your sound using 3 words?

Christina: I would have to say, hard, emotional rock.

Splice: What bands/ musicians were your inspirations growing up, as well as today?

Christina: We are playing the Vans’ Warped Tour this Summer which is the 25th anniversary and the line up is just crazy. I’m just fangirling over the bands on there because so many of them were huge inspirations of mine. The Used, A Day To Remeber, Blink 182, 311. We’re so diversly influenced in our band that every member really brings their influences to the writing. Guns N Roses and Foo Fighters are other influences of ours as well.

Splice: Was there a specific that made you want to pursue music?

Christina: No, I’ve always loved music and I was always singing since I was a little kid. I really was influenced early on when I started playing guitar by female singer-songwriters like Jewel, Alanis Morissette, that like angsty, 90’s chick rock. I learned to play like all of Jewel’s songs on guitar and that what I first started doing.

Splice: What are you currently listening to?

Christina: I’ve been listening to YUNGBLUD and Stitched Up Heart, so it’s really great to be on tour with them, they are awesome people. I really like Beartooth as well.

Christina: Performing, every night, in a different city. Also getting to meet new people all over the country. Being on stage performing is my favorite part of being a musician.

Splice: What bands would be on your “dream tour”?

Christina: That’s a tough one! I would definitely have to say Foo Fighters, it would be crazy to be on a tour with them. In This Moment and Halestorm. That would be a great bill.

Splice: What’s the most interesting thing that you guys have had happen on tour?

Christina: Well we could be here all day for this one but I’ll pick a really crazy thing that happened 2 tours ago. Joey ended up having to be in the hospital for like four days in Baltimore and so we had to miss a few shows on the tour and stayed in the hospital with him. As soon as he was able to get out, we hurried and caught back up with the tour and finished it but we had to play 3 shows without a drummer because he had to be on bed rest. It went over great but it was hectic and crazy because we didn’t know what was going to happen with him so we just rode it out. Everything ended up being ok and he’s fine now thankfully, but that’s definitely one of the most intense situations we’ve been in, for sure.

Christina: We really try to not put ourselves in a box with that. Sometimes the music will be written first and then I’ll come in after and write vocal/ lyrics. Other times we’ll just sit down with an acoustic guitar and just hash it all out right on the spot. We try to just take the creativity as it comes. I say we like pull it from the ether and just roll with it and if it’s a little spark of creativity, we try to catch it while we can.

Splice: If you had to pick one of your songs that describes your sound the best, what one would it be?

Christina: It’s our new single thats going to be dropping in a few weeks called “Pretending” so you’ll have to stay tuned to hear that one. There’s a music video for it that’s finished and the song will be dropping with the video. Actually, I could also say another one would be “My Enemy” which is our last single that we dropped.

Splice: Do you have a favorite song to perform live?

Christina: Hmm. I would have to say, on this tour, it’s another new song that’s called “Eating Me Alive” because it’s one of the most personal songs. Everytime I sing it on stage I feel brought back to the emotions which were very angsty and panicky, so I go to that place when I sing that song but I love it because it just brings out the really raw emotion.

Splice: Thanks again for taking the time to talk!

Christina: Stay tuned for the new EP that’s going to be coming out soon, we’ve been working really hard on it and it’s been a long time coming so I’m stoked to put it out!

Stitched Up Heart interview with Mixi-

Splice: Thanks for letting Splice Magazine have a little of your time! Let’s start off with a brief history of the band.

Mixi: “I actually put the band together in 2010. I was actually on a different label as a solo artist for a minute and it didn’t work out. I was really bummed about it. I went back home and I asked my mom and was like “This music industry thing is really hard, I dont know if I can do this.” She basically said “You went out to LA, you’ve gotta finish what you started.” So I went back out to Los Angeles and decided that I was going to put a new band together, I’m going to stitch up my heart and I’m going to do the music that I want to do.

Splice: What are some of your favorite spots you guys have toured?

Mixi: I really love Wisconsin, I know it sounds weird! That state is just magic, I just like the energy of the people because everybody throws down  so hard. Canada is great too. Its so hard for bands to tour in Canada that they are just so excited for music. I vibe with whatever the energy is at the place and if the people are giving me all their energy, then I give them everything that I have. The more they give me, the more I give back.

Splice: What bands/ musicians were your influences growing up and that made you want to pursue music?

Mixi: I have a very eclectic taste in music. I like everything from Beethoven to film scoring music to Bob Marley. I think my first posters on my wall were Pantera and KoRn. My first CD was Rancid, and my first cassette tape was Wu Tang Clan. I grew up on The Beatles because my dad listened to them a lot so I think it kind of ingrained into my being as a kid.

Splice: What is some of the music you guys are listening to currently?

Mixi: It’s going to sound weird, but Tony Robbins. Ive been listening to a lot of motivational, mental health kind of stuff because especially on the road you have to stay in a really positive headspace since we are in really close corners so we try to be as optimistic and positve as possible and also relay that message to other people that we meet.

Mixi: I just like seeing new places on this planet. It’s mainly just the traveling.

Splice: What bands would be on your “dream tour”?

Mixi: Everytime I say what bands would be my dream tour we end up touring with them so I’m going to say Metallica and KoRn. Id love to tour with Godsmack again, Halestorm and In This Moment again, Evanescence too. Those would be great!

Mixi: Billie Eilish, I love her! I really love her voice.

Splice: What’s the most interesting thing that has happened on tour?

Mixi: Recently, the very last show of the Godsmack tour, we all got up on stage and I got wear an inflatable T-Rex costume. We got up in front of like 12,000 people and acted like a bunch of idiots on their set and it was really funny.

Mixi: It changes with every album. For this one, we wrote 70 songs, most of it was just collaborating with producers because we were trying to find a new producer for this record to make it sound a little different. We just basically get in the studio and bounce ideas off each other. The music starts and then I come up up with a melody and then the concept for the song and then it goes from there.

Splice: If you had to pick one of your songs that describes/ shows your sound the best, what one would it be?

Mixi: “Finally Free” from our last record was probably my favorite. Its very straight forward of the idea of the sound that we like.

Splice: What 3 words describe your sound the best?

Splice: Thank you again for taking the time to talk with Splice, we really appreciate it!