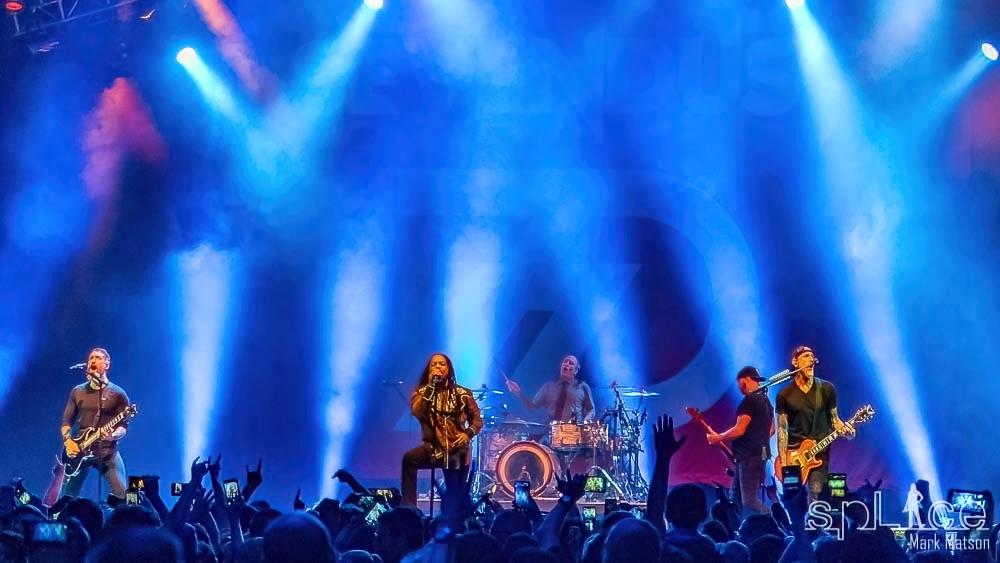 Few bands have the longevity to last twenty years and even fewer will last even longer than that. After twenty seven years Sevendust is one of the precious few bands that are in that rarified air. What separates them from the rest is that after all the years they still perform with same level of ferocity. The power and passion that they pour into their music and performances have earned respect and even some fear from their peers. They are one of those bands, that no one wants to follow on stage.

They have made a habit of a select small run of shows between Christmas and New Years day. For the truly lucky fans that are local to those certain venues or are willing to hop on an airplane and travel, these shows are a very special treat. This year they billed the four show tour as the Coun7Down To 2022. They kicked off the tour at Orlando Florida’s Hard Rock Live located in Universal Studio’s City Walk on December 29th.

As soon as the doors to the Hard Rock Live opened up, fans from all parts streamed in. No one was hanging out at restaurants until the last second or catching rides in the theme park. People lined up early to get prime spots at the rail or as close as possible. There would be no messing around tonight, after all Sevendust fans LOVE their band. After all these are special shows not just for the fans, but for the band as well.

With the requisite opening bands now done and out of the way, it was time for the band everyone was here for to show everyone how it’s done. With the stage bathed in a deep blue light and a giant Sevendust banner adorned with a giant 7D smack in the middle, the band made there way out to the stage. Lead singer Lajon Witherspoon was all smiles as he was waving to the appreciative crowd. He asked everyone how they were doing. Not satisfied with the crowds response he yelled out” we can’t here you” which got everyone yelling at the top of their lungs. Without skipping a beat, they dove right into “Dying To Live” the first single off of their latest release Blood And Stone. It was obvious by the intensity of the performance that the band was fired up and were intent on delivering an incredible show.

As these four shows aren’t about promoting a new album, it gave the band lots of room to highlight a wide range of their music. So next up they decided to go way back into their catalog and play their hit song “Denial” from their 1999 album Home. If there was anyone in the crowd that wasn’t fired up, when they played this song, this performance got everyone going full steam. They followed things up quickly with “Praise” off of Animosity. The guitar interplay between Clint Lowery and John Connolly was spot on. It was great that they brought out these two classic songs to really please their fans.

Sticking with the Animosity album they followed things up with “Deadset” and “Trust”. Clint’s backing vocals and solo work on “Deadset” was absolutely flawless. At one point Lajon walked over and was nodding in approval pointed at Clint and said “Everyone, Mr. Clint Lowery” Which got a loud scream of approval. On night like tonight, you know they would go back to the song that put them on everyone’s radar “Black” from their very first album Sevendust. Everyone in the venue was singing along and the band was loving it. Lajon even walked up to Clint’s mic stand and grabbed a bunch of pics and tossed them out in a show of love towards his fans.

Sevendust is one of those bands that really loves their fans. Concerts like these really drive home that point. Bassist Vince Hornsby would grab drumsticks from Morgan Rose to hand out to lucky fans and Lajon was waving and pointing at fans.  They were all smiles on stage and loving the energy the audience was giving them. In return they gave back some of the most beloved songs in their extensive catalog like “Waffle”, “Driven” and “Angel’s Son”.  In one of the most accurate dedications Lajon said he was going to dedicate “Enemy” To Covid.  He asked everyone if it was ok to do that and who could argue with that clever move.

If there is one front man that can hold an audience in the palm his hand is Lajon Witherspoon. He can get a crowd going and do his bidding. He asked everyone to get a circle pit going, but for everyone to walk. As the band launched into “Pieces” a huge pit opened up with, yes, everyone calmly walking.  As great as the show has been, they chose to make it a most memorable night by playing another fan favorite “Face To Face “.

As Sevendust has done through the years, they put on one of the best shows you could ever see. They gave their  fans a special treat by dishing out a night of some of their biggest songs that they have released. That they are willing to put on these special shows is just one of the many that they have such a diehard following. When it comes time for them to put on a show like this, it is would be a smart move to travel to one of these concerts.