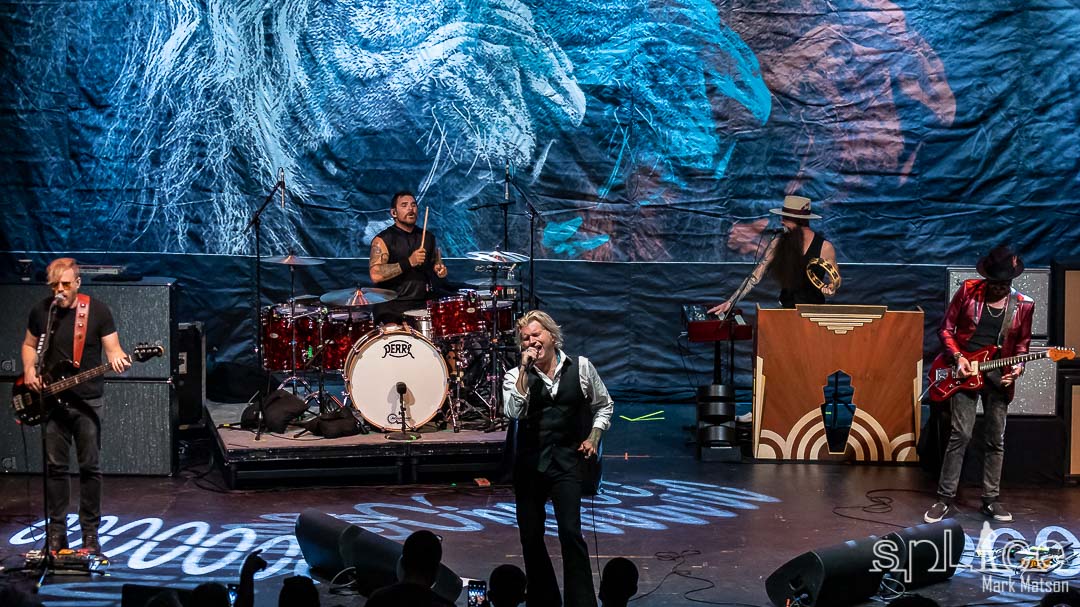 Ten years ago, in 2011 the Rival sons released their second album Pressure And Time. This was the album that made the world sit up and take notice. Garnering tons of positive reviews as well as 40 million-plus streams, this release put them squarely on the map. With nearly two years stuck on the sidelines due to the pandemic the band was itching to hit the road. As they weren’t releasing a new album it made perfect sense to tour in honor of Pressure And Time. So, a six-week tour was announced with the band playing the album in its entirety as well as plenty of their other material.

Finally, the night had come where Rival Sons would be bringing their brand of blues-tinged rock that is equally home now as it would be back in the seventies to their fans in Florida. As people streamed into the Plaza Live in Orlando Fl. everyone there was buzzing that they would get to hear every single track off of Pressure And Time. Throughout the crowd you could hear folks hoping that one of their personal favorites would get played as well.

As the stage lights came up bassist Dave Beste, drummer Mike Miley, keyboard player Todd Ogren and guitarist Scott Holiday made their way on stage. As they are celebrating Pressure And Time no one was surprised when the band picked up their instruments and started with the first few noted of “All Over The Road”. As Mike Miley and David Beste quickly settled into the groove of the song singer Jay Buchanan strutted out on stage looking dapper in white button-down shirt, matching vest and slacks and a black velour jacket. The second his vocals hit it was big wow factor. If you haven’t heard Jay Buchanan live it’s a real treat. His vocals are so strong that his voice alone can fill a concert hall, and tonight he could easily do that.

Track by track they moved through the whole album and doing an amazing job in the process. Scott Holiday whose nickname is Mr. Fuzzlord certainly lived up to the moniker. When they played “Pressure and Time” his distinctive guitar tone was in full display as well as his utter command of his instrument. While Jay Buchanan and Scott Holiday get lots of recognition for their contributions, drummer Mike Miley is equally as talented, and his drumming skills really helped drive “Burn Down Los Angeles.”  As they got close to the end of the album, instead of just playing the version everyone was used to, they even played “Company Man” and “Life For This Road” the two extra songs that are only found on the iTunes version for the very first time live. What a treat that was for everyone there.

After the band was done, they quickly left the stage for a well-earned breather.  Just before the group came back out, the distinctive drum track for “End Of Forever” played and the guys quickly came out and launched into a passionate version of the song. While they played Pressure And Time straight through, now they decided to take a bit more time and have fun. Jay apologized to the audience about them not coming to Florida more often and said now that Mike had his legal situation taken care of, they could come here more often. That definitely got a good laugh out of the audience.  During “Electric Man” Scott Holiday was on fire, his solos absolutely captivated everyone.

As much as the Rival Sons are known for their seventies rock swagger and grit, they also bring plenty of raw emotion and depth to their music as well. This was on full display tonight. Jay related to the audience that every time they try to leave this song off the set, they get requests for it for a loved one and they just have to play it. With that they launched into an emotionally powerful rendition of “Jordan” that clearly touched more than a few hearts. Another moment in this vein, was when Jay Buchanan was handed an acoustic guitar and his band mates left him there on stage to perform a beautiful acoustic version of “Shooting Stars” from their latest album Feral Roots.

They closed out the night with two songs from Feral Roots and one from Head Down. The band as whole collectively flexed their muscles on a rousing version of “Do Your Worst”. They breathlessly followed it up “Keep Swinging”. They saved “All Directions” off of Feral Roots for last song of the night, and just like every song before that, they poured their hearts into it.

Even though it has been close to two years since Rival Sons have toured, they showed no signs of rust. If anything, they were energized and passionate, with this show being the perfect elixir for their fans. Across the twenty-two songs they played they put on a show for the ages. Whether they were celebrating Pressure And Time or performing choice cuts from their discography they showed why they have earned a reputation as one of the most powerful rock bands out there today.