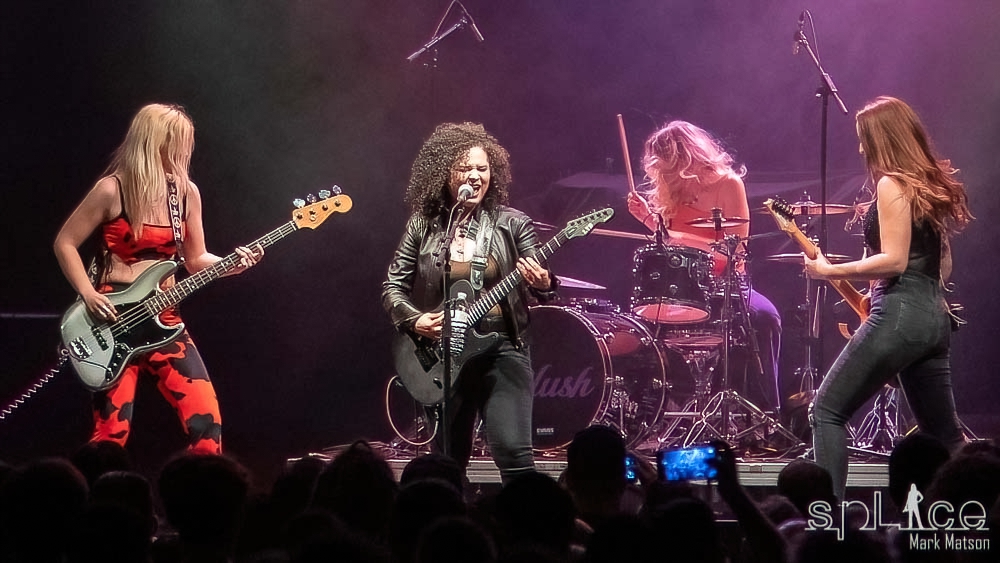 It seemed as though the torch of rock music has been carried by long time standard bearers of the genre. For those that love the music it’s great. But it is also limiting as new blood is needed to keep things fresh and exciting. Just a few short years ago it looked like the youth of the day had all but given up on rock.

Then out of no where Greta Van Fleet came along and showed the world that new blood was coming back to the scene. They were followed up by Dirty Honey, then Mammoth WVH. The youth movement in hard rock has added another band that is generating tons of buzz. That new band is an all-woman quartet named Plush.

In their short time together, lead singer/guitarist Moriah Formica, guitarist Bella Perron, bassist Ashley Suppa, and drummer Brooke Colucci have released their first self-titled album Plush and have toured in support of Mammoth WVH, Slash, Seether, Halestorm and Evanescence. With all this experience delivered in a short time, they were chosen to open up for Sevendust on their exclusive Coun7down to 2022 tour. The tour kicked off its four night run at The Hard Rock Live in Orlando Fl on December 29th, 2021.

With a near capacity crowd already in The Hard Rock Live, this wasn’t just about trying to get a prime spot to catch Sevendust, people were genuinely interested in seeing what the buzz was all about. As the band made it onto the stage, the preshow chatter stopped, and people unglued their faces from their cell phones. They kicked into their first song “Athena” the first single off of their record. All it took was a minute of them playing and everyone there was hooked. These women mean business and Moriah Formica has some serious pipes.

They followed things up with “Champions”. This song is built for arena’s. With Formica’s powerful and soaring vocals delivering the chorus “Fire in the sky, Never be denied, We are the champions, And you can see it in our eyes, Burning with desire, We are the champions” and the rest of the band playing with equal ferocity, this is one of those songs that just about any sports team would love to have in their mix during a game. Above all this, they deliver the song with complete authenticity. This is how they feel, and it shows. They are in complete command of the stage, and they own the crowd.

If there was one moment during the show that they made everyone a fan is when they played “Barracuda”. Yes, they covered the iconic Heart song which most bands shy away from due to the legendary voice of Anne Wilson.  But these ladies pulled it off perfectly. Mariah Formica showed that not only does she have the range this song needs, but also the power to deliver it. Bella Perron’s guitar work was spot on as was the rhythm section of bassist Ashley Suppa and drummer Brooke Colucci.

The last song of six song set was their most recent hit song “Hate”. As this song is currently burning up the airwaves and is on heavy rotation on many radio stations, the song has even broken into the Billboard Top 40 mainstream rock songs. The second Perron hit the beginning chords; it was collectively one of those “Oh! THAT is who sings that song I’ve been listening to”.  Of course, they delivered the goods and sounded every bit as powerful live as on the radio.

While Plush may be an all women band, that is incidental to the fact that above all else they are great musicians.  They may have only had a short time to work with on stage, but they made the absolute most of it. Before Plush and the other young guns of rock came along it was beginning to look like maybe rock had seen better days. Thankfully, this wave of exciting new bands including Plush has come along and shown everyone that rock is very much alive.