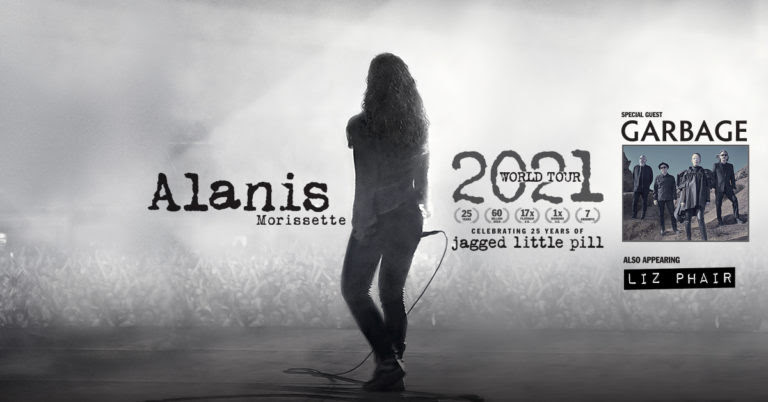 Today, seven-time GRAMMY® Award-winning singer/songwriter Alanis Morissette announced new tour dates for her 2021-2022 world tour to celebrate 25 years of JAGGED LITTLE PILL.  The 35-date US tour will kick off August 12, 2021 in Austin, TX. Produced by Live Nation, the tour will hit cities like Dallas, Nashville and Denver before wrapping in Los Angeles, which by popular demand, will include a two night special at The Hollywood Bowl on October 5th and 6th.

On this special anniversary tour, Alanis will perform her iconic album Jagged Little Pill in its entirety, as well as a variety of hits including tracks from her latest album, Such Pretty Forks in the Road. The tour has also added some new stops including, Kansas City, MO, Denver, CO, San Diego, CA and Las Vegas, NV. The tour will then travel to Europe stopping in various countries including Germany, Denmark, Netherlands, Hungary, Italy and Spain, before wrapping in the UK with 2 nights at the O2 Arena in London. The Australia, New Zealand and Philippines leg of the tour has been moved to November 2022.

Presale tickets will be available beginning on June 3rd and general onsale tickets for new shows begin on June 4th at 10am local time on LiveNation.com. For more information, please visit https://alanis.com/.

Alanis also released a new duet with Willie Nelson of his song, “On The Road Again” via Epiphany Music. Get it here!

*^Alanis Morissette and Up Dharma Down