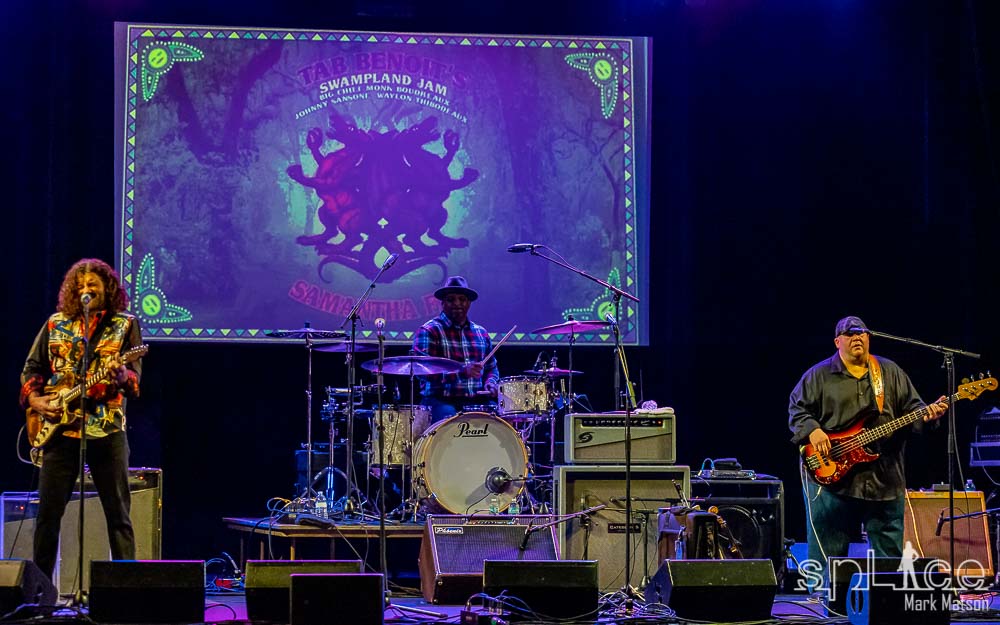 There are concerts, and then there are events. The former everyone knows what to expect. There will be great music and performances, and by the time the night ends everyone will have had a good time. But the latter is something special. It will be a night that soon won’t be forgotten. Every bit of the show will be extraordinary. Every artist to touch the stage will leave an indelible mark on the audience. By the time the stage lights finally dim memories will have been made. When Tab Benoit brought his blues drenched Swampland Jam and of course all the special guests to the venerable Tampa Theatre, this heaping of Louisiana’s finest music definitely qualified it as an event.

It’s always a challenge to find someone to open a show. To obscure and they might not be able to get enough people in the door early and get everyone warmed up, too big an artist and you risk being overshadowed and outplayed. But when you take the risk of getting a big artist the reward is the reward of an incredible night. Tab went big when he signed on blues guitarist and singer Samantha Fish. Since winning Best New Artist Debut in the 2012 Blues Music Awards her trajectory has gone straight up. With her incredible guitar playing as well as her fusion of the blues, rock, country and even funk this was definitely a bold choice indeed.

After the long line of fans that were snaked around the Tampa Theatre had finally gotten in and were seated, it was time for the sold out show to begin. As Samantha Fish stepped on the stage nattily dressed in a red leopard print pants suit, her and her band launched into “All Ice No Whiskey” off of her latest album Faster.  From the opening notes she played on her white Gibson SG, you just knew she was on top of her game.  With hardly a breath she played “Twisted Ambition”, another song from her latest release. Both of these guitar driven songs were not only a great way to kick off the show but introduce her fans to some of the new material off of Faster.

Samantha Fish immediately had the crowd in the palm of her hand. Her infectious smile, energy and stage presence just make this one hell of a ride. While she is clearly an incredible talent, she also has a band that is worthy of sharing the stage with her. The rhythm section of bassist Ron Johnson and drummer Sarah Tomek had things locked down all night, and keyboardist Matt Wade deftly added layers to all the songs.

Whether she was dipping into some her older material like “Don’t Say You Love Me” or “Dream Girls” off of her previous release Kill Or Be Kind her smooth voice and guitar work were definitely a treat. But when she fetched her 4 string cigar box guitar and started to tune it up, the band started with the beat to “Bulletproof”. She thanked the crowd as the band and the audience were clapping to the beat. With that she put on a wicked slide guitar clinic that continued right into “Shake ’Em On Down” which was the final song of her set. Now this is how you end a set, with incredible show stopping highlight performances.

If the night was to end now, this would have been a great concert. But there would be far more to go. Now it was time for Tab Benoit to bring his delta swamp blues to the Tampa Theatre’s stage.  Tab and his long time band mates bassist Corey Duplechin and drummer Terrence Higgins finally took the stage as the full house cheered wildly. With a grin on his face and sparkle in his eye from all the love he was receiving he grabbed his trusty Thinline Telecaster and without a seconds hesitation ripped into an absolutely blistering introduction to “Why Are People Like That”. His band laid out a perfect beat for Tab to weave his six string magic. Tab’s vocal delivery was spot on, but his playing was otherworldly. There was no denying who was the master guitar player on tonight’s bill.

Tab rarely plays the same show twice and eschews a standard setlist. He treats his shows like he treats his songs. He stretches things out and totally jams out making every night and half the time every song a bit different which adds to the entertainment and uniqueness of every night he plays. Of course, tonight’s Swampland Jam would follow suite. Songs like “For What It’s Worth” and “These Arms Of Mine” would be stretched out deluxe versions that were an absolute treat and really how the blues should be played live. It also allows him to showcase his rare combination of fiery highly skilled technique, emotion, and looseness in his guitar work.

For over an hour Tab and his band mates wowed everyone with their playing. So far this had been an amazing evening. But now things would get interesting. Tab decided it was time to bring out some of his friends to join the fun going on the stage. Joining him was Johnny Sansone who played harmonica, accordion as well as lending his vocal talents, and fiddle player Wayne Thibodeaux who also shared in the singing too.

If you’ve had the privilege of seeing Tab live, you know he is a genuinely funny man that can tell a story. But when you add Wayne and Johnny to the stage the entertainment gets taken to a whole other level.  The banter, teasing and storytelling among the three had everyone laughing. The camaraderie between these guys could only come from growing up in the same area of Louisiana, years of knowing each other and of course an undying love of the blues, zydeco and Cajun music.

Of course, the music was still the front and center. The songs they decided to play just like every other one would turn into an extended jam session highlighting each members incredible talent. Songs like Tab Benoit’s “Sac-Au-Lait Fishing” were given extra texture and depth with the addition Thibodeaux’s fiddle and Sansone’s accordion.  Wayne Thibodeaux had a chance to showcase his playing as well as get some time front and center singing his song “Here We Go Again”.  As the jamming on stage was beginning to subside Big Chief Monk Boudreaux made his way on stage in his full green feathered Mardi Gras outfit to join in on the fun.  With the addition of his vocals things were virtually complete.

There was one last surprise left in Tab’s bag of tricks for this night. With everyone in full jam mode on stage, Tab brought out opener Samantha Fish to join in on the fun.  Judging by the smiles on everyone’s face on stage they were having the time of their lives. To cap off the night, Tab and Samantha faced off against each other and dueled out six string style on an extended version of his hit song “Night Train”. This signature song of Tab’s showcases his complete mastery of his instrument. What a treat it was for everyone to these two incredible guitarists trading licks back and forth throughout the song.

Tab Benoit’s Swampland Jam definitely lived up to its name. Just about every song was turned into an extended jam session. For over three hours Tab Benoit and friends delivered some of the finest music that has ever been brought to the stage at Tampa Theatre and it’s sold out audience. Indeed, this was an extraordinary night that will have left a lasting impression on those that were lucky enough to snag a ticket to this event.