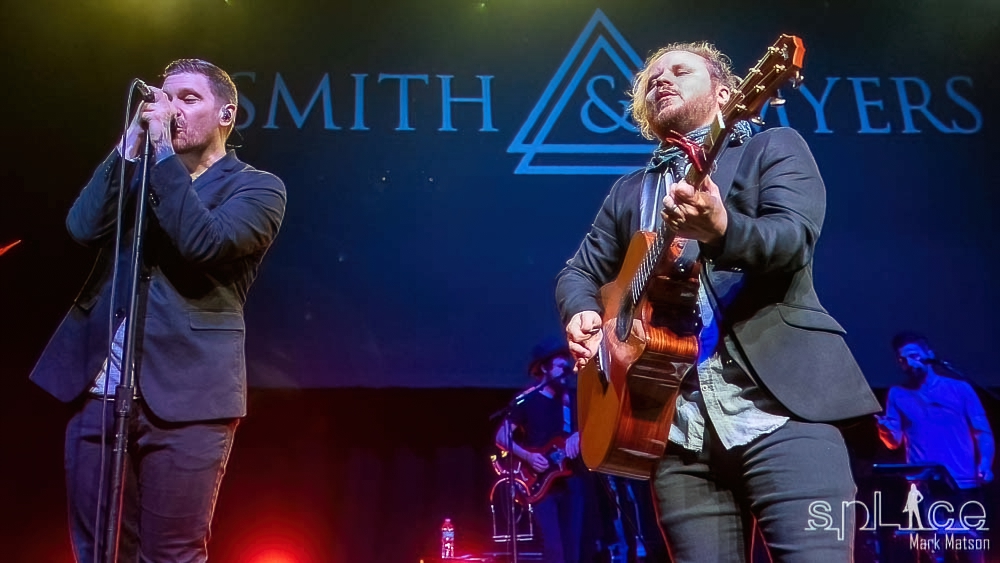 As the clock winds down on 2021 everyone reflects on the highs and lows of the year and the promise of what’s to come. New year’s eve is always the pinnacle of this and what better way to end it on a high note than a concert. At the House Of Blues in Orlando FL they have lined up an incredible event for live music fans, Smith & Myers. Warming up the crowd for them would be Mack & Moore.

If the name Smith & Myers doesn’t leap out at you, then how about Shinedown. Smith & Myers are Brent Smith and Zach Myers, one half of platinum recording stars and the band that sells out arenas Shinedown. Keeping things in the family as it were, is opening act Mack & Moore. They are half of Allen, Mack, Myers & Moore. Which is Zach Myers side project away from Shinedown.

With the near capacity crowd all set and ready to rock in the new year the sense of excitement was palpable. Belying the sense of high energy and excitement was the stage setup. It was sparsely arranged with the acoustic guitars in their stands and a lone keyboard towards the back. Was this going to be a high energy rock and roll show, or a calm, sedate event?

Finally, it was time to get things underway. Zack Mack and JR Moore hit the stage, grabbed their guitars, and did what they do best. The duo performed their upbeat material for a very appreciative crowd. As many people that were in the house tonight were familiar with Mack & Moore as Zach Myers is involved with them as well. So, it was no surprise that they had plenty of people singing along with them. Zach Myers even stepped on stage to help out with one song by singing and playing keyboards. Their country, americana and rock infused material was the perfect way to get the night going.

As 11 pm hit it was now time for Smith & Myers to bring everyone into the new year. As they made their way to the stage, they were all smiles. Brent was nattily dressed in a suit jacket, t-shirt, slacks, and boots with Zach similarly dressed except he had a tie loosely draped around his neck as well as his usual bandana. Joining them on stage was Zack Mack and JR Moore. Brent flashed his megawatt smile and asked everyone whether they wanted new school or old school. As everyone was shouting out their favorites, he said how about old school with a new school twist. With Zach at the keyboards, they launched into the Billy Idol classic song “Rebel Yell”. With the opening of it decidedly low key, Zach came out from behind the keyboards and grabbed his guitar to join. As the chorus picked up, so did the energy. What a very cool way for a show to begin!

Fans of Shinedown as well as Smith & Myers know that the onstage banter is just as much part of the show as is the music. Zach let everyone know that he was up very early due to bringing his family along and taking them to Disney and no chance for a nap before the show. So tonight, he was running on fumes and who knows what he would do or say which definitely added to the entertainment. Along with this, Zach puts together the setlist just before the show and Brent doesn’t have a clue what they will be performing until he hits the stage. Tonight, things were definitely going to be unique and entertaining.

One of the great things about Smith & Myers shows is it gives them a wide variety of material to perform and yet retain their authenticity. They can do Shinedown songs, the music that they’ve created just for Smith & Myers, as well as cover songs that resonate with them. They did a beautiful version of “Coast To Coast” from their album Smith & Myers volume 1. They followed it up with the Billie Eilish hit song “Bad Guy”. It’s their ability to do these very different songs and still retain their identity that makes this a unique and highly entertaining concert.

After playing a brilliant medley of the INXS song “Never Tear Us Apart” and the Oasis classic “Don’t Look Back In Anger” with Zach Myers singing, it was time for the guys to perform some Shinedown material. Zach introduced the first song by saying “If you’re a Shinedown fan and you got married in the last ten years chances are you played this song at your wedding”. With that they played “I’ll Follow You”. They also played “State Of My Head” and “Misfits”.

As it was getting close to midnight, there wasn’t quite enough time to play a whole song. The guys didn’t want to perform and stop part of the way through. So, Zach decided to have fun. He started out things by playing the theme song to the cartoon Fat Albert. As there were still a couple minutes to go, he pulled out a showstopper. For fans of the movie Forgetting Sarah Marshall, he played “Dracula’s Lament” which had everyone laughing hysterically. Even Brent was laughing at this one. With everyone still chuckling the countdown to midnight began and as new year hit confetti rained down on the stage and out into the venue.

Just because the clock hit midnight did not mean the show was over. Brent and Zach had more music and laughs to share. Shinedown songs like “How Did You Love” and “Sound Of Madness” were played as well as covers such as “Losing My Religion” and “Valerie”. In a nice nod to Zach, Brent let him have some time to share his talents with the audience. In what had be a very touching moment for everyone in the venue, Zach brought his wife out on stage and together they sang the Randy Travis hit song “Forever And Ever, Amen”. When Brent made his way back on stage, he was wearing a blonde wig and a hat. Zach commented I thought I saw Kenny Wayne Sheppard here or is that Chip Gaines. While still wearing his wig they played a beautiful version of “Bad At Love”.

After a quick trip off stage to get rid of the wig and to revert back into his regular persona, Brent laughingly asked Zach who was that guy on stage? They got back into some classic Shinedown songs including “Second Chance” and the Lynyrd Skynyrd classic “Simple Man” that they have adopted as their own. In one of the most intense performances of the night was saved for the very end. They started out with a powerful version of the Phil Collins hit “In The Air Tonight” which they turned into a medley with Zach taking over and singing the Nine Inch Nails song “Closer” with Zack Mack backing him up with some outrageous slide guitar work. All four guys made their way to center stage and got down on one knee. With Bret eventually standing and encouraging everyone to cheer the guitar work that they were hearing and seeing. What an amazing performance of both songs with a spin that only they could put on it.

Whether they are playing as a duo as Smith & Myers or in Shinedown with the rest of their band mates you know that they will deliver an impressive concert. Tonight, was definitely no exception. For over two hours they delivered the goods with incredible performances, highly entertaining banter, and memorable laughs as well. There could have been no better way to bring in the new year other than at this concert. If this show is any indication of the coming year, 2022 is primed to be a good one.