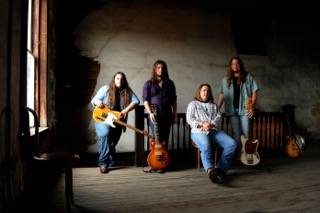 Recently, Splice had the distinct pleasure to visit with guitarist Steve Jewell from the band Otis. Read what Steve had to say about his early days with Otis and how the band made their rapid climb in the music industry.

Splice: Hi Steve, thanks for letting Splice Magazine have a little of your time. Lets get right to it.Give me a brief history of the band and how you guys came together.

Steve Jewell: “Were all from South Central Kentucky. We all grew up knowing each other through our local music scene. In a small community, if anybody plays music around there you kinda know about it and everybody kinda knows everybody. We all have a very similar upbringing, we grew up playing with our fathers, family members, cutting our teeth on the same style of music from old country, southern rock, blues, bluegrass, all that good stuff. We’re going on 8 years as a band. We released our latest album back in September of 2017. We signed with Cleopatra Records out of Los Angeles, CA and Its been an incredible year and a half since we released it. We’ve toured a total of 7 countries and its been great.”

Splice: Do you have a favorite spot that Otis have been?

Steve: Definitely Germany. Germany was one of our favorite places, but all throughout Europe they have such a deep appreciation and love for music. It’s nothing for the people over there to take off work, use vacation time for a couple of days to follow a band around to 4 or 5 shows and just blow all their money on t shirts and CDs. It was really incredible. We then came back and did a full US tour and got to go out west for the first time. Going out west was something we always wanted to do.”

Splice: How would you describe the Otis sound using three words?

Splice: What bands or musicians were your influences growing up?

Splice: Is there a specific band or musician that made you want to play music and perform in a band?

Steve: “It was no doubt my father. My father is a guitarist and grew up playing music in bands. I remember being a very small child, going and watching my dad play various places and just being infatuated with the drums and watching the drummer play. I started out on drums when I was about 5 years old and then changed over to guitar when I was about 11. All 4 of us kind of have that in common was our fathers and other family members playing and growing up around music.

Splice: What kind of music are you guys listening to now?

Steve: A little bit of everything. We love roots music, and still listen to a lot of the same stuff we grew up on. Listening to bands like ZZ Top and Lynyrd Skynyrd and reading about them and listening to interviews of them talking about their influences which led us farther back and that’s how we ended up discovering who Muddy Waters was, an Ray Charles, Robert Johnson, and just keep going back like that. So we still listen to a lot of that great stuff but there’s still a lot of great stuff coming out today like our good friends in Blackberry Smoke and Chris Stapleton. One guy we really love is Nigel Hall.”

Splice: What bands would be on your “Dream tour”, whether you were just spectating or if you were also playing?

Steve: Definitely ZZ Top, Aerosmith, Alice Cooper, and I’d love it if Led Zeppelin would come back together and do a reunion tour with Jason Bonham, and with Otis opening, that would be pretty awesome.”

Steve: I really want to collaborate with Mike Campbell, that would be a dream come true. Maybe venturing a little bit farther out of our genre, definitely Marty Stewart and Kenny Vaughn, hard to think though, there’s so many people. I’d love to hang out, jam, or write with some people like Roger McQueen and David Crosby, big fans of those guys. Neil Young too. There’s also some phenomenal bluegrass people that I’d love to collaborate with like Sam Bush.”

Splice: What has been your favorite thing or the most interesting that to happen while touring?

Steve: Definitely just seeing the culture in the different countries of Europe was a complete mind-opening experience. It’s completely different that what you’re use to here in America. They’re so appreciative of the music and so locked in on the performance. Our last show of our European tour last year was in Vienna, Austria, I believe and before the show I got to watch our drummer eat a pizza that had squid on it, so that was really interesting! Something about drummers, they like to live life on the edge.”

Splice: Going back to your album, what’s your writing/ creative process like?

Steve: “I guess, naturally, since Boone and myself are the two guitar players, a lot of times we may individually be sitting around the house or something and come up with some licks or some riffs or an idea for a song, and sometimes Boone and I will get together and maybe work on some ideas. Then all four of us will come together at rehearsal and write songs that way. Every time we get in a room to practice and write its like four guys playing for their lives. We take it very seriously and try to write the best music that we possibly can. One thing we love to do is go out and play new material live and see how people react to it. How the audience reacts to us drastically affects our performance and what we do with the songs. We may play the same song every night but we don’t play it the same way every night.”

Splice: If you guys had to  pick one of your songs that describes/ shows your sound the best, what would it be?

Steve: “I would like to say, off our latest question, I’d pick “Change”. It’s got that perfect blend of southern flavored blues rock and roll. I think it’s got a nice, energetic beat to it. Something that we strive to do and take a lot of pride in, from the lyrical aspect, we always strive to put a positive and uplifting message, and that song just simply speaks about change. We love having songs about picking each other up and and loving each other and we also like singing about just everyday stuff that everyone can relate to. I feel like “Change” is a relatable song from the lyrical perspective, has a positive, uplifting message, and the musicality part of the southern blues rock melting pot is a good representation of who we are and what we’re trying to achieve.”

Splice: Steve its been a pleasure chatting and learning about you and the band Otis. Thank you for your time and good luck on the Tour. We cant wait to see Otis live!

Catch Steve Jewell and the band OTIS live this week at  Callahan’s Music Hall in Auburn Hills,Michigan February 15. They will be out on tour in support of their brand new LP “Eyes of the Sun” (Cleopatra Records).