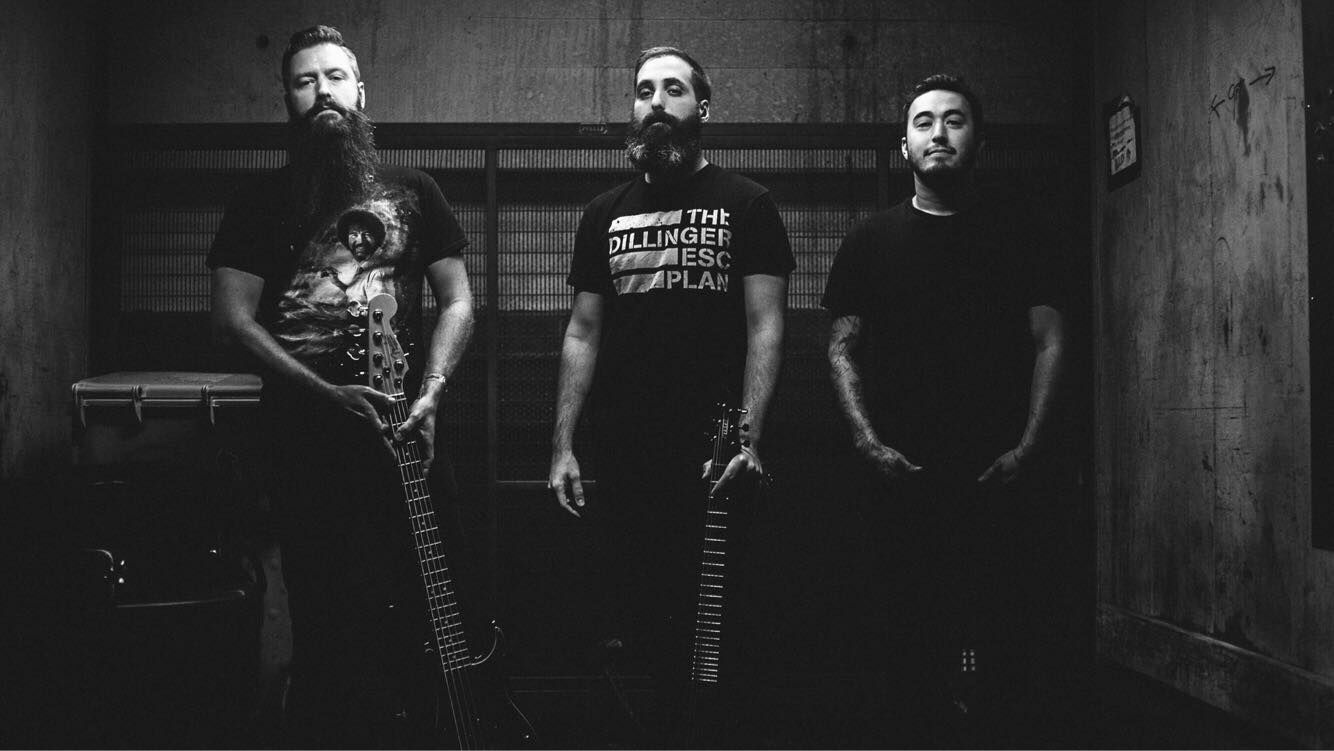 Splice recently had the chance to speak with Jonathan Jourdan the vocalist and guitarist of the up and coming progressive hard rock trio To Whom It May(TWIM) from Galveston Texas.  Signed to G4L Records, Kevin Martin of Candlebox fames new record label, this band is starting make waves with its first full length album The Great Filter, and Sirius XM’s Octane has gotten a hold of their songs “Bypass” and “The Signal Fire” and has been playing those. They have also hit #10 on the iTunes Metal chart and the Billboard Heatseekers chart.

How did your band evolve from your previous efforts?

I think the biggest evolution was I became the singer. With my previous efforts I was just guitar and did a lot of writing behind the scenes. This new project was a big growth for me. As far as the band I think we have all tried to make the musical decisions we wanted to in the past, you know, but we’re now trying to learn from our previous efforts and kind of put all those things into this project.

Why did you decide to take on the singing duties

Kind of a necessity I was writing so much and had all these kind of particular ideas of how I want things to be carried across, you know, rather than try to make someone else fit into that box. I was in the demos, I just started, you know, doing more and more of them eventually just said, why not try. And here we are now.

How has the transition been to be doing that? What have you found to be the biggest challenges?

Definitely, that you are, you know, playing and singing at the same time, because I never wanted to sacrifice, the rhythmic, the groove and the rhythmic the challenges of the music, but today we sing and play that was definitely the biggest challenge and kind of fun one as well.

How are you doing with that?

it’s like I said, it could be a challenge. But at the same time, it kind of keeps it interesting, you know, and then, when we’re working on new stuff, like, learning to ride a bike again, kind of, but it’s, it’s fun, it’s cool, you know, it definitely keeps me on my toes.

What did you learn from your old band that you applied to To Whom It May?

Just to write records that you really want to hear, you know write music that you really enjoy. That’s the biggest thing we took from that was just, you know, and I’ll probably look back from previous bands and say, you know, that part of the record is really cool. But they hit this kind of low here, we just wanted to really with this band, write a record that we should listen to, from the first song to the last song, it’s still like, we went on a journey, we never really got bored, and hope that we did that with this album.

In your previous efforts not everyone was on the same page?

Yeah, just that we were all learning to be musicians, I think, you know, we were learning the, you know, just going through the motions and learning how to write a record and learning how to put the pieces together. You know, sometimes you don’t always do it right on the first try. And I feel that, you know, that’s a normal kind of progression, a lot of bands making in that, like, in those early phases, sometimes you get little magical moments to those so it’s not all bad.

How do you feel about To Whom It May?

What are some of your influences? I was listening to your album and I hear The Deftones in there.

Yeah man, The DefTones are amazing. We all are fans of The DefTones. I think they’ve definitely influenced us in conscious and subconscious ways. I think outside of that, that we, we really love all types of music. I think the biggest kind of common denominator with everybody in the band is Infinite Grooves. Really, you know, whether it be funk, or, you know, old country or metal progressive stuff. You know, there’s always a place for all that stuff as long as it grooves.

How was it being this rock/progressive/heavy band from Texas?

Actually, right now, there’s a lot of really awesome Texas bands, we actually just wrapped up the tour with a couple of Texas bands, Drowning Pool they’ve been around for years now. And they’ve done a lot of awesome things. You know, I grew up listening to them. Also, Sons Of Texas, those guys are kind of coming up right now. They can command an audience and, you know, it’s fine. It’s good Texas music. There’s a really good scene down here right now. You know, it’s also good to take that scene outside of Texas, you know, just kind of share it with the rest of the country. I mean, it’s fun down here, but it’s good to get out too.

You named your album The Great Filter in reference Fermini’s theory that there is a step in the evolutionary process that is almost impossible to get past. Do you feel that in getting this album released you’ve gotten past that step? Or are there other steps you need to get past?

I think its kind of like how something can get closer, I’m going to follow it up with another astrophysics kind of metaphor. Like when something gets sucked into a black hole, and never really goes all the way through it gets closer and closer. And I think that’s kind of where we are. You know, we’re getting through that hurdle, getting closer and closer to passing it. But, there’s something else to learn, there’s something else to, you know, be humbled by. So, hopefully, we never lose that sense of like, you know, we got to earn our stripes and, you know, be ready. And then at the same time, I do feel like we’ve passed that idea that, you know, maybe this project won’t work, I feel like the records done, I feel like it’s a good snapshot of where the band’s at and mentally and musically and I think now it’s just a question of what’s next, you know.

So what is next for you guys?

How does it feel to know that you are the first band that Kevin Martin has signed to his new label?

It was an honor. And we grew up listening to the Candlebox. And you know, luckily, we were able to go out there with those guys early December, I believe. And early on last December. And it was just amazing to kind of watch him every night. Kevin is a great singer on the album. And even better in person. I feel like he just was an impressive frontman and commanded the stage. Everybody was having a good time to see that and to kind of learn from that, take it in, like a sponge is really cool, a good experience. Then to come out of that and find out that, you know, we’re now in talks about being on the label and that was an awesome, man. It’s humbling. It’s a cool experience.

So he broached the idea with you? Or did you go to him?

I think it was kind of a mutual thing. Our management kind of was contacted by him. And Kevin was a fan of the music and we talked and he kind of was in the process of setting up a label and it was tailored around what around the artists image and it was all about, you know, let’s make something from the ground up. Which was kind of great because we had been studio for so long at that point, working on this record that we were ready to kind of ship out and we were looking for a good home for it. And I just couldn’t come a couldn’t come at a better time.

So how long were you working on the album?

I think probably a total of writing and recording probably three years, maybe. I think about that much. You know, we spent a long time on the writing process because again, we were kind of coming out of the ashes of a previous band and different bands. I was becoming a singer for the first time. And we’re writing as a teams for the first time. So, it was a bit of growing phase, but we were in the studio for a little while for about a year off and on and just kind of pieced it together and just took a time with it. Really.

How does it feel to hear it on the radio as it’s being played on XM Radio.

It’s great, man. I couldn’t even describe that feeling man. I wish I could bottle that feeling. Give it to everybody. You know, it’s just, it feels good to know that the records done the, it’s out and getting received well. You couldn’t ask for more than that.

You’ve toured with some great bands. What have you learned from life on the road with them?

I think the best thing you know, that I’ve learned probably is and really, it’s good to see as well as awesome as it as it is to learn. It’s just how connected a lot of these bands are with the fans and with the people that come to see them and, you know, whether it be like a VIP thing or just sticking around later, making sure not to tuck away in the night. You know, if they finish the set, that’s the biggest thing it’s, it’s just good to see that you know, and it reinforces my kind of faith in the music community knowing that these bands that I’ve been a fan of for 15 or 20 years are still doing that.

If you could collaborate with someone out of your genre who would it be and why?

Out of my genre huh, 21 Pilots I’d say, I really love what they’re doing. I think that that they really define the genre that they live in right now. It would be cool to meet minds with that guy. Other than that, Michael Jackson.

The first half of the year touring. We’ll see what goes on. And then once we take a step back from that, we’re going to get to work finishing up whatever the next thing we’re doing. We’re kind of working up the ideas right now, there’s a lot of ideas on the table. And I think the biggest thing right now is just push this new album that we have The Great Filter and just get on as many new stages as we possibly can.

Are you going to do a national tour or a regional tour?

We will be out there nationally in February. We will be with Candlebox all throughout the states in this December through the end of 2018. We’re gonna be doing some stuff in Cleveland, believe outside Columbus, all the way through Atlanta. And then we’re going to be out in California in January. So, it’s just kind of scattered amongst the states. And we’re going to have new stuff coming out really soon as well. As far as dates go, and all that stuff is on our website.

Thank you for your time and good luck!

To Whom It May: