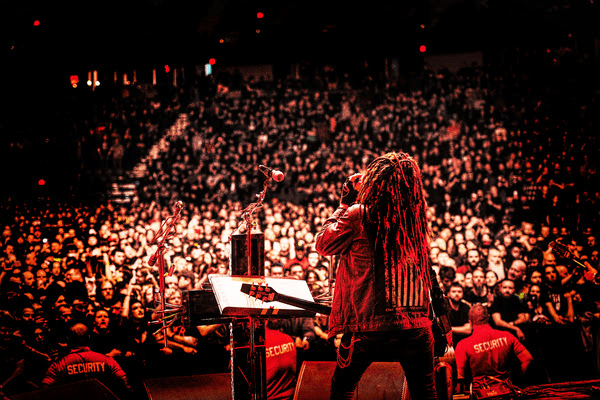 Due to ongoing restrictions regarding social gathering amid the COVID-19 pandemic, Ministry will be rescheduling the July and August dates of the upcoming Industrial Strength Tour, originally scheduled to begin July 1. The new dates will kick off March 31, 2021 in Seattle and run through May 1, 2021 in San Francisco, hitting all the previously announced markets with an additional date added for Salt Lake City (on sale date TBA).

The tour’s special guests KMFDM and Front Line Assembly remain on the lineup for this one-of-a-kind celebration that honors the 30th anniversary of Ministry’s revolutionary album “The Mind Is A Terrible Thing To Taste.”

Original tickets will be honored for the new show dates in 2021; or, ticketholders can receive refunds at the point of purchase. For the Dallas show date only, original ticketholders have been automatically refunded and will need to repurchase tickets for the new 2021 date, starting today at https://ministrygasmonkey.eventbrite.com/. 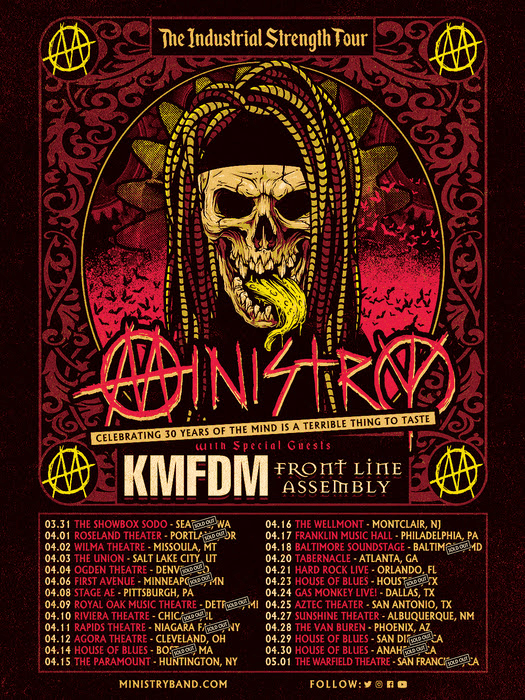 ABOUT MINISTRY
Born in 1981 in Chicago, Ministry has been the lifetime passion project of founder Al Jourgensen, considered to be the pioneer of industrial music. In its early days, Ministry was identifiable by its heavy synth-pop material in line with the new sounds and technology that were being developed in the ‘80s. Ministry’s output began with four 12” singles on Wax Trax! Records in 1981 before the first LP With Sympathy in 1983 via Arista Records. As time progressed however, so did Ministry, quickly developing a harsher, and more stylized sound that the band soon became infamous for on seminal albums Twitch (1986), The Land of Rape and Honey (1988), and The Mind Is A Terrible Thing To Taste (1989). With the release of Psalm 69: The Way to Succeed and The Way to Suck Eggs (1992), Ministry hit an all time high in the mainstream musical realm and received its first Grammy nomination. In total, Ministry has been nominated for a Grammy award six times. After an indefinite hiatus in 2013, Ministry’s latest album, 2018’s AmeriKKKant, continues to reflect Jourgensen’s views on the frightening state of society and politics. With the latest lineup featuring Sin Quirin and Cesar Soto on guitars, John Bechdel (Killing Joke) on keys, London May (Samhain) on drums and Paul D’Amour (Tool) on bass, Ministry continues touring and recording with new music and a few more surprises planned.