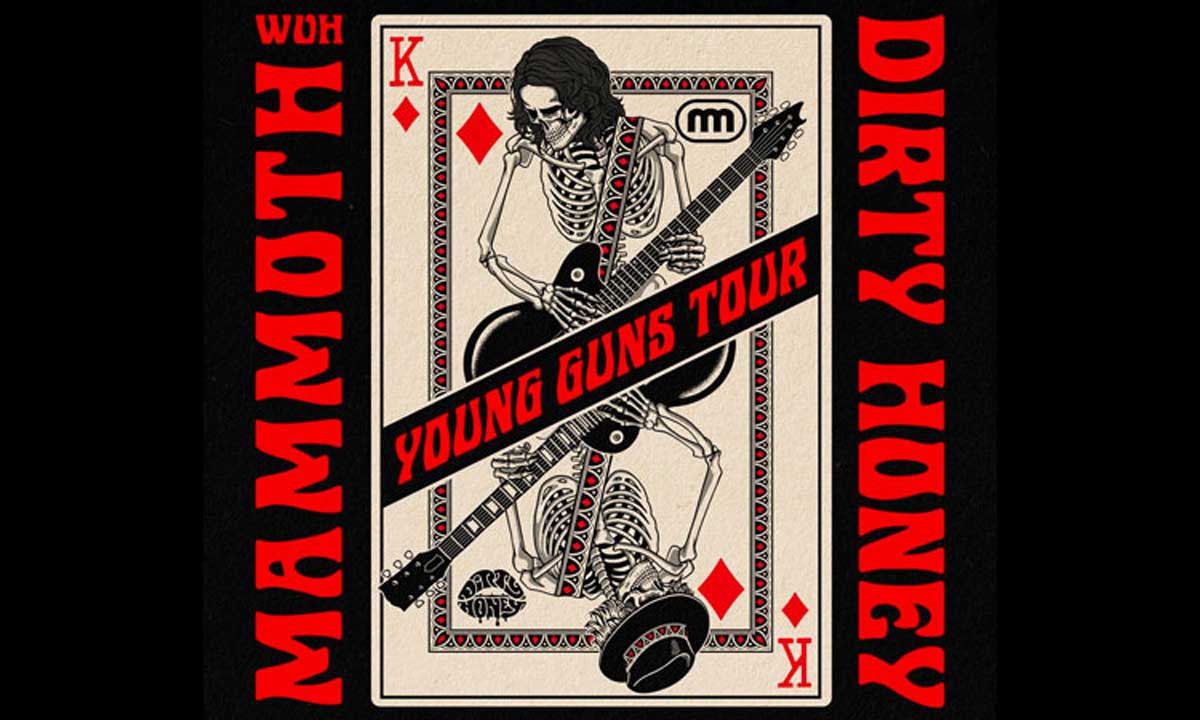 Royal Oak, Michigan (March 23,2022)-For the last couple of decades, there has been continuous chatter about the impending death of rock and roll. After the rise and fall of the Pacific Northwest sound, the door was thrust open allowing a multitude of other sub-genres to explode, all vying for a stake in the suddenly wide open musical landscape that continues to rage to this very day. On Wednesday, however, two of the brightest young bands in a new upstart generation in rock music hit the stage at the Royal Oak Music Theater and proved that sentiment to be as wrong now as it’s ever been during the last twenty plus years.

The “Young Guns Tour” is a co-headlining run featuring two of the hottest bands in the business that may not be household names yet, but based on their rapid ascent towards the top of the charts show they aren’t standing around waiting to see what might happen. Original plans was for the 30-date Young Guns Tour to kick off in January 2022, at Chicago’s House of Blues and traverses all corners of the United States, but COVID concerns pushed the start back to the later part of February. Based on the atmosphere inside the sold out venue, fans didn’t mind the postponement because they were the lucky ones who had purchased tickets early on to see the next generation of flag bearers for the rock and roll genre.

Tonight’s show opener, Mammoth WVH was founded by Wolfgang Van Halen and features Jon Jourdan on guitar, Ronnie Ficarro on bass, Garrett Whitlock behind the drum kit and for added aesthetics, a lifesized cardboard prop standing in for guitarist Frank Sidoris who is currently on tour with Slash. Like everybody else on the planet who is not currently living under a rock, it’s impossible to talk about Mammoth WVH without mentioning that founder, vocalist, and guitarist Wolfgang Van Halen is the son of legendary guitarist Eddie Van Halen. While he’s not trying to hide from his famous lineage, Van Halen the younger isn’t out riding on his famous fathers coat-tails either as he looks for success. His legendary father’s name may have been an initial influence, but Wolf’s song writing , instrument playing ability and front man status have clearly proven he’s the real deal. After all, he learned the trade from one of the best that ever was.

Mammoth WVH delivered a high powered, albeit loud, opening salvo with “Mammoth,” that showcased the immense talent and  flexibility of the entire outfit right off the hit. Some of the set’s high points during the 12 song setlist related to Van Halen’s late father, the scintillating homage “Mr. Ed,” “Think It Over,” which Van Halen introduced as “my dad’s favorite,” and of course, the heartfelt “Distance,” which he released as a tribute shortly after the death of Eddie Van Halen in October of 2020. Overall Mammoth WVH leaned more towards rock’s heavy side during its hour on stage and played 10 songs from last year’s self-titled debut album plus one that didn’t make the album, the propulsive “Don’t Know at All.”

Obviously, to all the fans on hand, the biggest surprise of the set came when WVH addressed the crowd. “In rehearsal we’ve been playing a song that’s not ours that we really like. Don’t worry, it’s not a VAN HALEN song,” he mockingly quipped. The band then launched into a very crunchy cover of the Alice In Chains hit “Them Bones,” which was spot-on musically and punctuated by the grungy harmony vocals of Van Halen and Jourdan. Overall Mammoth WVH played a tight, hit packed set that had the Motor City suburb crowd screaming for more well before the lights came up ending the highly entertaining performance.

Dirty Honey has been making waves since they first hit the scene about five years ago. Formed in LA in 2017, with a debut EP released in 2019  along with their first full album dropping in 2021, Dirty Honey has climbed to the top of charts and hit the stage as both opening act and headliner with no support from any record label.

Vocalist Marc LaBelle, guitarist John Notto, bassist Justin Smolian, and drummer Corey Coverstone have modeled themselves in the truest of rock fashion – by playing shows and winning over audiences or as frontman Marc LaBelle termed it, “livin’ the down ‘n’ dirty” — side of the rock and roll spectrum. This Young Guns Tour run follows an opening slot the band filled during the Black Crowes reunion tour in 2021, where fans across the country got their first taste of Dirty Honey. Based on reaction the band received throughout the tour, fans loved what they heard.

With another dozen-song set, just like Mammoth WVH, Dirty Honey delivered on a promise they’ve been giving for years now: that they’re not just a flash in the pan. They’re a rock band, they’re out to make music and there’s nothing that’s going to get in the way of that mission. For tonights headlining set, the quartet drew equally from its first EP and album, both titled “Dirty Honey,” along with a wealth of already established favorites such as the set opening “California Dreamin’,” “The Wire” and the crowd-chosen “Scars.”  The group also delivered on their take on Prince’s “Let’s Go Crazy” that it played on a frozen pond for the opening of this year’s NHL Winter Classic in Minneapolis.  LaBelle also introduced the group’s next single “Another Last Time,” singing part of it to fans up close on the theater floor. Dirty Honey’s only miscue during their incredible set was a late-show run of individual solos that dampened the building momentum. Luckily the guys had the bands two biggest hits, “When I’m Gone” and “Rolling 7s,” remaining in their back pockets and rectified the misstep when delivered back-to-back before the final bows.

These two potent bands, each from different realms of the spectrum are proving to the masses that rock music is not dead. There may not be the same level of support from industry suit types, but the support from the fans is as prevalent as ever and the demand for these shows is alive and growing. If you have the chance to catch one of the remaining shows on the “Young Guns Tour,” or to see either of these bands live in any venue, make sure you take it. Mammoth WVH and Dirty Honey, unbeknownst to themselves have taken on the dubious task of being the saviors of rock and roll. Based on performance alone and despite any reports to the contrary, the future of rock and roll is in very capable hands.