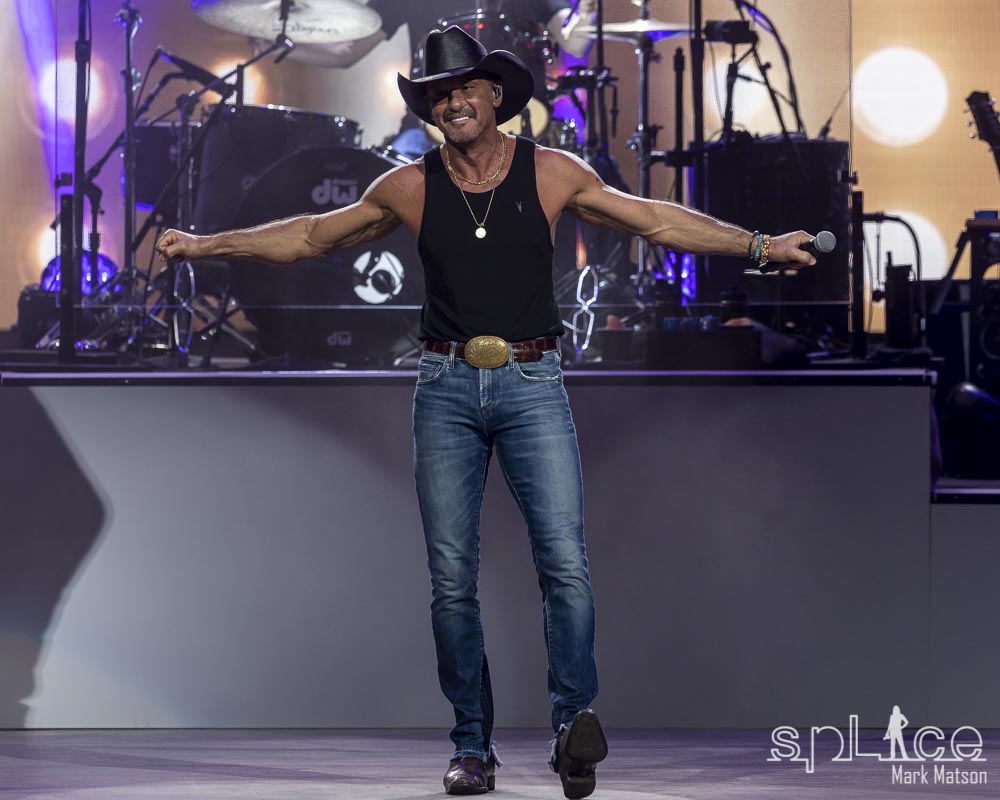 It’s the first week in May in Tampa Florida and that means one thing, opening season at the MIDFLORIDA Credit Union Amphitheatre. For one of the first shows of the concert season they have put together a good one, none other than country music superstar Tim McGraw. Fresh off of his appearance in the Paramount hit TV show 1883, McGraw has launched his Tour 2022. Coming along for the ride are Brandon Davis, Alexandra Kay, and Russell Dickerson.
With the weather in Tampa on a Friday night in near flawless conditions, it was a picture perfect evening for a concert, and an even better way to kick off the weekend. The fans started packing it in early so they wouldn’t miss a minute of the great show planned for this evening. With a trio of opening acts, there would be plenty of music for everyone to catch. Relative newcomer Brandon Davis whose career was kickstarted with the help of his wife and TikTok was in fine form and was well received by everyone there. With a large ‘T’ shaped runway extending out from the stage, it gave him plenty of opportunity to get closer to everyone. Following up after him was Alexandra Kay. A former contestant on American Idol from the 2011 season, she used the opportunity to help launch her music career. With her first hit single “No More” along side her latest material, she put on a great performance and the crowd loved her. The final opener of the night was Russell Dickerson. Having two full length albums under his belt that have accounted for some eight hit singles he had plenty of material for the night. Over the course of his near hour long performance, he worked the stage like a pro. Sometimes dancing, sometimes playing to the crowd, Dickerson did a great job entertaining the crowd.

Finally, it was time for the man of the hour to take the stage. Under a beautiful sunset, the house lights went down, and the stage lights came up letting everyone know that the show would be starting any second. The seven members of Tim McGraw’s band made their way onto the stage and kicked into the first song “How Bad Do You Want It”. At just the right moment Tim McGraw came out wearing a sleeveless t-shirt jeans, and of course his black cowboy hat. He slowly strutted across the stage turning and connecting with the audience as he sang. Throughout his time on stage, he would walk out on to the ’T’ and of course this was well received by all his fans. To be able to get that close to a superstar of his stature was a thrill for sure. Without question he sounded great and his twenty one song setlist was chock full of fan favorites like “Shotgun Rider”, “Live Like You Were Dying”, and “Don’t Take The Girl”.
As the fans streamed out of the MIDFLORIDA Credit Union Amphitheatre, everyone was all smiles. After all, starting off a weekend with a country superstar under a starlit sky for many is as about as perfect a Friday night as you can get. Tim McGraw and his trio of openers put on a great show, and everyone sounded great. Tim McGraw’s Tour 2022 continues through June so catch it while you can.