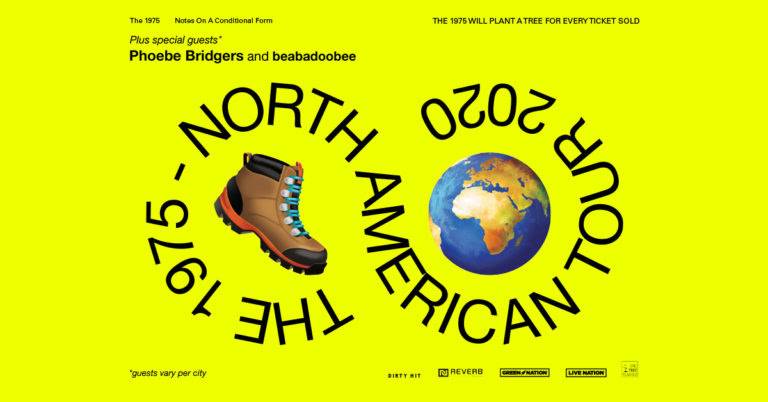 Grammy®-Nominated Band Shares “Me & You Together Song” –  Listen Here

‘Notes On A Conditional Form’ Scheduled For April 24 Release

Produced by Live Nation, the headline tour will kick off on April 27 at The Cynthia Woods Mitchell Pavilion in Houston, TX. The run will include shows at The Forum in Los Angeles (May 7), Red Rocks Amphitheatre in Morrison, CO (May 11) and New York City’s Madison Square Garden (May 26). Phoebe Bridgers and Beabadoobee will support on most dates. The 1975 will also be performing at numerous 2020 festivals, including Bonnaroo. See below for itinerary.

One dollar from each ticket sold will go to One Tree Planted, a non-profit organization that plants trees all over the world to fight climate change, protect biodiversity, empower communities and restore our planet. Their aim is to reforest the planet, one tree at a time.

“Me & You Together Song” debuted as the Hottest Record in the World earlier today when The 1975 performed it live on BBC Radio 1’s “Future Sounds with Annie Mac.”

Fans who pre-order Notes On A Conditional Form will instantly receive “Me & You Together Song” plus the opening track – “The 1975,” which features a Greta Thunberg monologue – and the singles “People” and “Frail State of Mind.” Placing “People” on its list of “The 100 Best Songs of 2019,” Pitchfork said, “The song is both a wake-up call and an admission of defeat—a balls-out strut to be played for the indifferent masses as the world burns.”

Notes On A Conditional Form is the follow-up to 2018’s A Brief Inquiry Into Online Relationships, the Manchester-based quartet’s third consecutive album to top The Official U.K. Albums chart. In the States, it claimed the No. 1 position on the Top Album Sales, Alternative Albums and Top Rock Albums charts. The single “Give Yourself A Try” has received a GRAMMY® nomination for Best Rock Song. The 1975 took honors for best British Group and British Album of the Year at the 2019 BRIT Awards and received two Ivor Novello awards – Songwriters Of The Year and Best Contemporary Song (“Love It If We Made It”).

After being named one of the best songs of 2018 by critics at The New York Times, Pitchfork, Rolling Stone, Vulture and NPR, “Love It If We Made It” also appeared on the Best Songs of the 2010s recaps. A Brief Inquiry Into Online Relationships and the band’s second studio album, I like it when you sleep, for you are so beautiful yet so unaware of it, were included on Pitchfork’s 200 Best Albums of the 2010s list.

Phoebe Bridgers will be direct support on all dates except *

Beabadoobee will be support on all dates except +