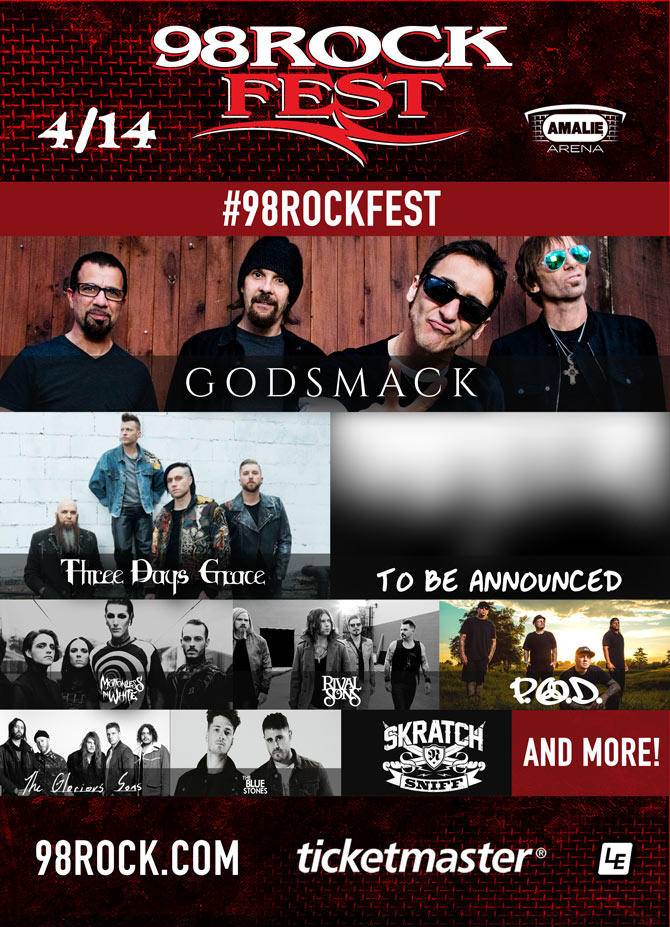 98ROCK’s on-air personalities “Crash & AJ” officially announced the lineup for 98ROCKFEST which will include rock legends Godsmack to headline, Three Days Grace, P.O.D, Motionless in White, Rival Sons, and more to be announced.

Listeners will have the option of purchasing a VIP ticket, which will grant early entry into an exclusive private acoustic performance with Motionless in White at 4:30 PM. The VIP ticket also includes: VIP gold circle seats closest to the stage, VIP parking, VIP early entry, entry into the VIP only party inside the exclusive Firestick Grill from 3:30 PM to 6:30 PM where finger foods and complimentary soda/water will be served, and a 98ROCKFEST commemorative laminate.

For up-to-the-minute information on 98ROCKFEST log onto 98ROCK.com keyword: 98ROCKFEST or listen to 98ROCK on-air or online via the station’s website, as well as on iHeartRadio, iHeartMedia’s free all-in-one digital radio service.

Artists and/or event subject to change or cancellation without notice.

TICKETS: Tickets for the event go on sale to the general public on Monday, November 19 at 12:00 PM. Ticket prices are $29.00, $45.00, $55.00 and $75.00. VIP ticket packages are $199.00. Prices are subject to change throughout the on sale period and do not include facility fee or service charges. Tickets can be purchased at the AMALIE Arena Ticket Office, Ticketmaster outlets and at Ticketmaster.com. To order tickets by phone call 800.745.3000. For more information about VIP Ticket Packages please visit AMALIEArena.com. Advanced parking passes are available at Ticketmaster.com or the ticket office.