House of Independents located in Asbury Park, New Jersey was the place to be three days prior to Christmas. Since 2015 The House of Independents has been cemented as downtown Asbury Park’s premium live music venue. With an open layout that features a large stage located below street level with a balcony overlooking the general admission floor section. Complete with state of the art lighting and sound, it is a great place to catch a live show.

Fresh off of their second US tour, The Happy Fits were back in their home state ready to give back to familiar fans as well as locals who have recently come to discover one of the most addictive bands out there today. If you’ve ever been to a show that had The Happy Fits on the bill you know how infectious their sound and vibe on stage really is. 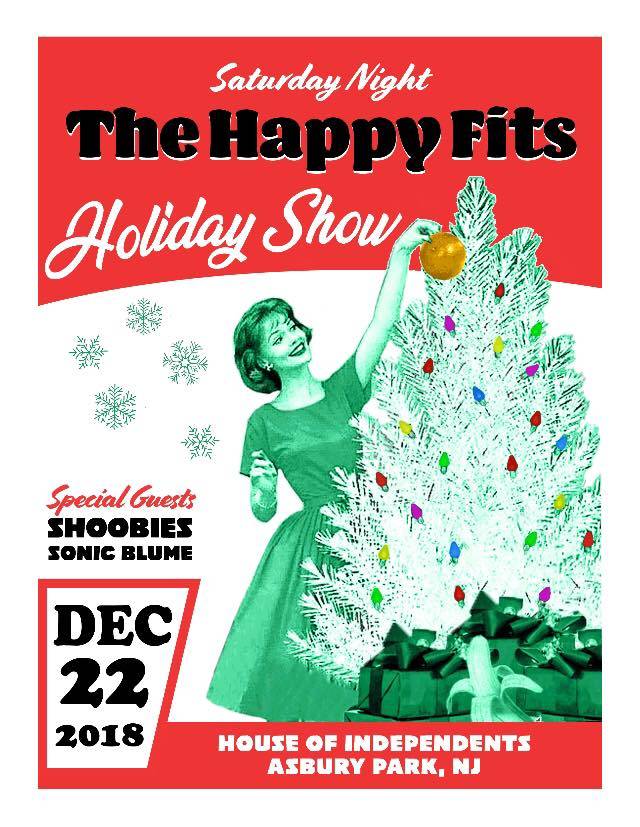 House of Independents has a capacity of 500, and tonight’s show sold out several hours prior to show-time. Surprisingly fans were not lined up super early prior to the show as most general admission shows are, but maybe that’s due to the cold temps and high winds that were ripping through downtown Asbury Park. However, it did not take long for the place to fill up with excited patrons once the doors opened.

Youthful Sonic Blume was first on tonight’s bill. New Jersey natives Max Connery (Synth-Guitar-Vocals), Daniel Murray (Drums), Andrew Phelan (Bass), and Chase Landgrebe (Guitar) make up this award-winning lineup. Winners of the 2018 Asbury Music Award for Top Young Band (Under 21) this foursome have made quite a name for themselves locally. As soon as they started playing you could see why they were bestowed such an honor.

Their indie/dream-pop/shoegaze style is highly melodic, musically. With 2018’s Beach Karma album and the earlier EP, Sonic Blume (2017) providing tonight’s selections, it was all business. Throughout their entire set, the music was delivered with the grace of a band twice their age. It will be nice to see what the future has in mind for these four, but from what we witnessed tonight, their future outlook is great.

Fan favorites the Shoobies were up next. A sharp contrast to the prior band, these guys were high energy right out of the gate. It is interesting they have a swagger when playing live that does not necessarily carry over onto their recorded songs. The added intensity was welcomed throughout their entire set.

Casey Marley (Guitar-Vocals), Beef (Drums-Backup Vocals), Kevin Miller (Lead Guitar & Piano), and Dylan Bailey (Bass) make up this feisty four-piece. Based in New Jersey they have been actively recording since 2016 and performing since 2017. You could tell by the crowd’s reaction that the Shoobies are well known around the area. Highlights of their set were the raucous song Sex and the mellower song Violet.

It was now time for the main course – a heaping helping of The Happy Fits. Ross Monteith (Guitar-Vocals), Calvin Langman (Cello-Vocals), Luke Davis (Drums-Vocals) were ready to cap off the year with this Holiday Show. As they entered the stage the crowd erupted in screams and applause that continued until they mounted up their respective instruments and struck up the night’s first song.

With a set that included their earliest songs to this year’s latest from Concentrate, they had the crowd dancing, clapping, and singing along throughout the set. While You Fade Away was a huge crowd pleaser followed by So Alright, Cool, Whatever with the crowd belting out “I wanna be barely hangin’ on, when you make me lose control.”

Continuing with the fun high school homage song Best Tears to the darker side of things with Drink. Picking up the pace with Heart of a Dancer followed by Mary had the crowd rocking.

Tonight was an incredible reminder of the great material this young band has written. The diversity in styles really set these three apart from others we have seen. The ability to have fun songs like Achey Bones, melody filled songs like Relimerence, or flat-out rock songs like Hungry People, they have all an indie rocker could want.

As they finished up their set and exited the stage, the crowd was yelling for more. Rightly so – they had two of our favorites they had not played. A two-song encore was in order, and as they struck open the opening chords of Too Late the crowd was again, happy. Finishing the night off with Grow Back they left on a high note as the crowd sang every word along with this foot-stomper.

Their music is so infectious there really is no end to what is enough, but everyone got their money’s worth and more tonight. As The Happy Fits gathered at the front of the stage for a post set crowd “selfie”, everyone was overheated, sweaty, and worn out.

We’re hoping there are plans for another tour and possibly more music soon. If you haven’t had a chance to check these guys out, what are you waiting for?

Check out our Concentrate Album Review!