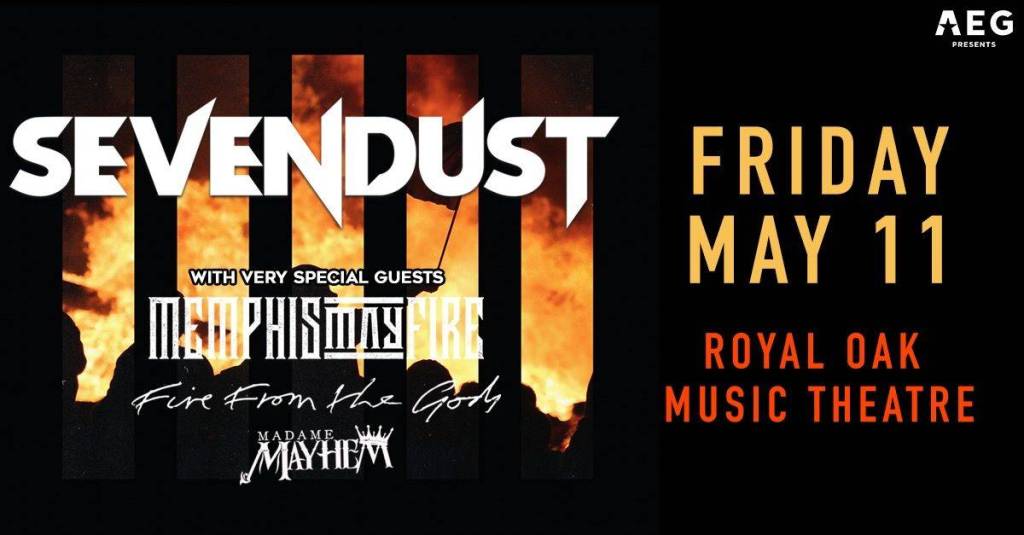 Royal Oak, Michigan (May 14, 2018) – Royal Oak Music Theatre, in Royal Oak, MI was about to get rocked on this rainy, cool, Friday night! With the stacked line up of Sevendust, Memphis May Fire, Fire From The Gods, and Madame Mayhem, the weather wasn’t going to stop anyone from lining up outside the venue before the show so they could get in and get the best spot possible!

After having chatted a bit with Madame Mayhem before the show, I was super pumped to see this eclectic woman do her thing!. A Manhattan-born singer-songwriter, you could definitely tell that there was that ‘always on the go’ energy. Madame Mayhem gave her eager audience that in-your-face attitude they all know and love! They kicked off their set with “War You Started”, which is also the first song on the album “Ready For Me”. They then played “Stand Up”, “Innocent”, “Hurt Me”, “Left for Dead”, “Something Better”, and finished off with a monster of a song that just happens to be called “Monster”.  Combined with great melodies – there is no better way to describe them than rock-n-roll!! From the first song of the set to the last, the energy remained high and was a great way to start off the night and get everyone ready for the next three bands to follow.

Next up was Fire From the Gods. Having seen them once before when they were opening for Of Mice and Men, I was excited for an intense set. From Texas, the band consists of AJ Channer (vocals), Jameson Teat (guitar), Drew Walker (guitar), Bonner Baker (bass), and Richard Wicander (drums). They are known to be hardcore/metal, with a touch of a hip-hop/ rap vibe. Doesn’t seem like that combination would work well, but it totally does and makes for some great music! From the first song “The Voiceless”, the crowd was pumped. As the set went on, these guys really helped get the energy up and going by encouraging people to “open up the pit”. They then played “Composition”, “Diversion”, “Evolve”, “In Spite of Doubt”, “End Transmission” and finished the set off with “Excuse Me”. By this time, more and more people were piling into the theater and the crowd was loving the energy!

The third band on tonight’s bill was Memphis May Fire. From Nashville, TN, the band is made up of Matty Mullins (vocals), Kellen McGregor (lead guitar), Jake Garland (drums), and Cory Elder (bass). They are described as “a dedicated group of men striving for something greater than the world around them; it’s about the transcendent power of love through heavy rock”, and I couldn’t agree more. Another stellar set of high-energy music, with a great message behind it made the crowd’s energy go way up! The crowd was loving the set and were encouraged to get the pit going. Between all the jumping around and killer vocals, everyone was pumped for Sevendust to hit the stage!

Sevendust blazed the stage, opening with “Dirty” from their brand new album, All I See is War. This Atlanta, GA, based band is comprised of Lajon Witherspoon (lead vocals), Clint Lowery (guitar, vocals), Morgan Rose (drums, vocals), John Connolly (guitar, vocals), and Vince Hornsby (bass). They kept their audience well-entertained with “Ugly”, “Pieces”, “Enemy”, “Trust”, “Denial”, “Angel’s Son”, “Home”, “Rumble Fish”, “Decay”, “Shine”, and “Thank You”. Jumping, smoke machines, and the light show, just added to the killer music and talented musicians of the band. Though they could have done a totally acoustic set and it would have been just as good, that’s how great these guys are.

I think the whole band was extra pumped from their album dropping that same day as well! People were crowd-surfing and the front row was getting fist-bumps and high fives from the band. Lowery even let a fan strum the guitar a few times! After “Thank You”, they took a quick break, with everyone making as much noise as they could for the encore, they came back out and played “Black” and “Face to Face”. I really think people just kept getting more and more pumped as the night went on because the encore was nuts! It was my first time seeing these guys live and I’m so glad I got the chance, and I will definitely be seeing them next time I’m able to.

All in all, it was an awesome night filled with some superb hard rock! It made standing out in the cold rain for a little bit before doors opened worth it. Madame Mayhem was a perfect way to get things started. Fire From the Gods and Memphis May Fire Really got things going and got everyone even more pumped for the headliner. Sevendust rocked! I will definitely be catching these bands the next time they are in town!

Be sure to check out our interview with Madame Mayhem!