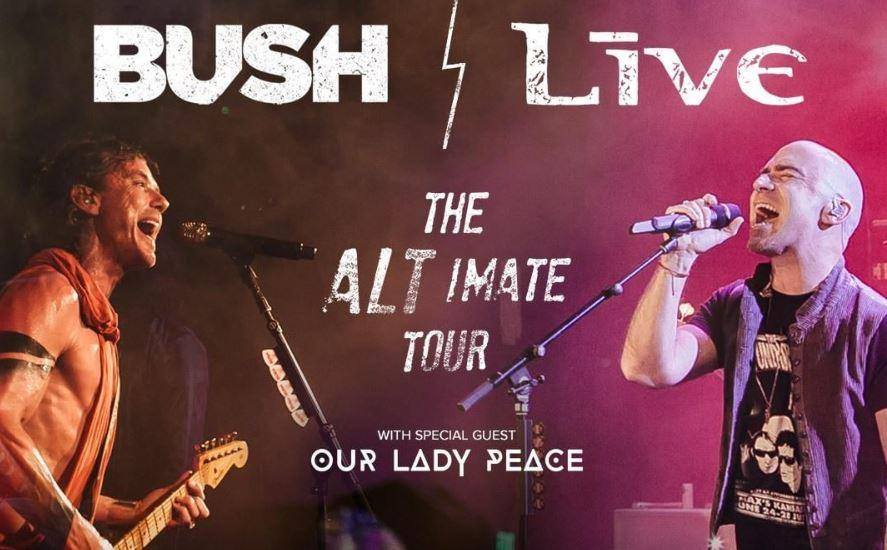 Tampa, Florida (August 16, 2019) – Every Thursday people post pictures or stories of a great time from their past under the hashtag throwback Thursday. On Friday August sixteenth at the MIDFLORIDA Credit Union Amphitheatre the hashtag should be changed to flashback Friday. Yes, there was a flashback to the mid-nineties when alternative rock ruled the airways. This was a time when earnest lyrics were mixed with a guitar driven sound and bands like Our Lady Peace, Live, and Bush were among the most popular. Flash-forward to this night and Our Lady Peace, Live, and Bush are together on the perfectly named Altimate tour.
The on and off rain, and typical high Florida humidity didn’t stop people from packing into the Amphitheatre early on as with a lineup like this no one wanted to miss a single band. The first act to take the stage was Canada’s own Our Lady Peace. While usually bands playing the opening slot have shortest amount of time and play to a half empty venue, only the former was true. With multiple hit albums to their name, this was a band that fans were eager to see. Making the best use of their time on stage Our Lady Peace decided to offer a sampling of songs throughout their career instead of just focusing on their biggest selling album 1997’s Clumsy. They kicked things off with “Drop Me In the Water” from their most recent release Somethingness. With twenty five plus years doing this, lead singer Raine Maida vocals are still flawless. Of course, they had to play arguably their two biggest hits. When the opening chords of “Superman’s Dead” rang out everyone was ready and willing to sing along. With acoustic guitar in hand Raine Maida’s earnest vocals were at their finest when he performed “Clumsy”.

With this being a co-headling tour between Bush and Live, they would alternate been who would close out the night. For tonight’s performance Live would take the stage first. This year is the twenty fifth anniversary of the release of Live’s huge hit album Throwing Copper. Knowing this, you knew there would be a heavy dose of these songs on the setlist tonight, and of course they didn’t disappoint. Nearly half of this album would make its way into the setlist. As the PA system pumped in the hit Rolling Stones song “Gimme Shelter” the band took the stage to the cheers of the crowd. With giant video screens showing images of the cover of the album Throwing Copper they kicked off the night with “All Over You”. The band quickly followed it up with “Selling The Drama” to the delight of everyone there. At this point, lead singer Ed Kowalczyk let everyone know they were going to play a song from a beloved band of theirs. With that they played a beautiful cover of R.E.M’s hit song “Losing My Religion”. This wasn’t the only cover they would do this night. The Rolling Stone’s huge hit song “Paint It Black” would also make its way into tonight’s show. Towards the end of their performance the band would leave the stage leaving Ed Kowalczyk alone with his acoustic guitar to perform “Heaven” and “Turn My Head”, which he did an absolutely beautiful job on. Sadly, their performance had to end, and their final song of the night was one of their biggest hits, “Lightning Crashes” and what an ending it was, Ed Kowalczyk’s voice and the rest of the band’s performance were full of passion and power.

Now it was time for Bush to close out the night. These British rockers fronted by Gavin Rossdale, just like Live, are celebrating the twentieth anniversary of their huge album Sixteen Stone. Their setlist would also be biased towards this massive hit album. Hitting the stage with all the energy of a double barreled shotgun blast, they ripped into the fifth single off of Sixteen Stone, “Machine Head”. Even though it has been twenty five years, they still throw every ounce of energy and urgency that this song commands. Switching things up, they brought their performance to the present with a song off of their 2017 release Black And White Rainbows, “This Is War”. After this Guitarist Chris Traynor leapt into the slide drenched intro guitar solo of “Everything Zen” and the entire venue went nuts. The look in the eyes of the lucky fans who were able to get to the very front at the rail said everything, this is one of THOSE songs that they had to hear. Gavin Rossdale’s energy level was unbelievable. He was in near constant motion entertaining the crowd. He showed the crowd just how much energy he had when he leapt into the crowd during their performance of “Little Things” and ran through the whole Amphitheatre all while singing the song which thrilled every fan that was lucky enough to be in his path. After all this, he calmed things down by performing “Glycerine” by himself. With just his guitar and his well know voice, he captivated everyone that was lucky to get a ticket to this concert. Finally, the band came back and performed another hit that Sixteen Stone spawned, “Comedown”. How better to end the night than with a song about coming down from intense emotions.

With these three bands in one place together, the tour name is aptly named. It really is the Altimate Tour for not only fans of Our Lady Peace, Live and Bush, but fans of that beloved genre of music. So, if your looking to add to your throwback Thursday memories then this tour is one that can’t be missed.