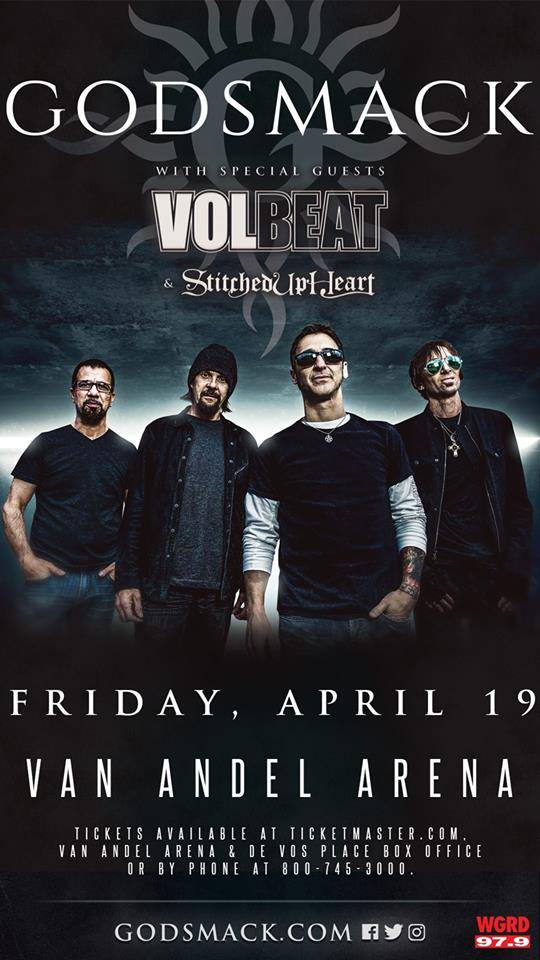 Grand Rapids, Michigan (April 19, 2019) – When Godsmack announced that Van Andel Arena in Grand Rapids was going to be the only tour stop in Michigan this year, the stage was quickly set. Tickets became a hot commodity and hard-rock fans marked April 19 on the calendar for their pilgrimage to the West side of the state. Read on for our take on what some consider the potential “Concert of the Year”.

Godsmack attacks the senses with searing guitar riffs and pyrotechnics from start to finish. On tour in support of their latest release, When Legends Rise, the Boston natives wasted little time cranking up the intensity. Opening their set with  title track When Legends Rise from their latest release, frontman Sully Erna along with the highly underrated guitarist Tony Rombola lead the charge. Erna’s trademark intensity and indelible vocal range were featured on the opening track along with “Unforgettable”, “Someday” and current satellite radio stalwart “Say My Name,”all from the same LP. Throw into the mix Robbie Merrill on the bass, a guy that seems to be always having a good time and Shannon Larkin on drums; the formidable lineup takes on a legendary stature.

Wasting very little time with idle chatter between songs, Godsmack moved through their energy infused set with ease and precision. The 15-song, one hour and 40-minute set included catalog hits from the past such as “1000HP”,”Cryin’ Like a B*tch”, “Voodoo” and “Whatever”. A unique aspect to a Godsmack show is the “de facto” drum duel between Sully and Shannon during “Batalla de los Tambores”. Two drum sets are moved center stage and pair take turns going back and forth, often times in tandem with killer timing and precision. With beaming smiles to go along with the crowd-pleasing intensity, the pair toss drumsticks back and forth with nary a miss! An obvious highlight for sure, most still wonder if they are doing it to please themselves or the crowd! Whichever it might be, it rates high on the crowd noise satisfaction meter!

Erna reigned in the energetic crowd a bit with an emotional performance of “Under Your Scars”. Sitting solemnly at a keyboard center stage, he went on to say, “I have lost a lot of friends to this disease and we have to unite and help those who are in need. Bennington and Cornell left us way too early and they didn’t deserve to have it end for them the way it did.” As he began to play the opening chords, Van Andel Arena was fully illuminated with lights from the cell phones of the capacity crowd. A fitting tribute by all who have lost friends and family to suicide.

Closing out the incredibly entertaining evening with “I Stand Alone” and “Bulletproof“ in typical “over-the-top” Godsmack fashion, they decided they weren’t quite finished yet. Erna began yelling into his microphone,“You want more,YOU WANT MORE?” And after a quick meeting in front of the Larkins drum kit, the boys from Boston put an exclamation point on the nights performance with an intense version of the AC/DC classic “Highway To Hell.”

Godsmack’s show tonight in Grand Rapids left no doubt that those who proclaim rock is dead are sadly mistaken. An unmistakable iconic rock band joining forces with Volbeat to tour North America in 2019, what more could a hard-rock fan ask for!