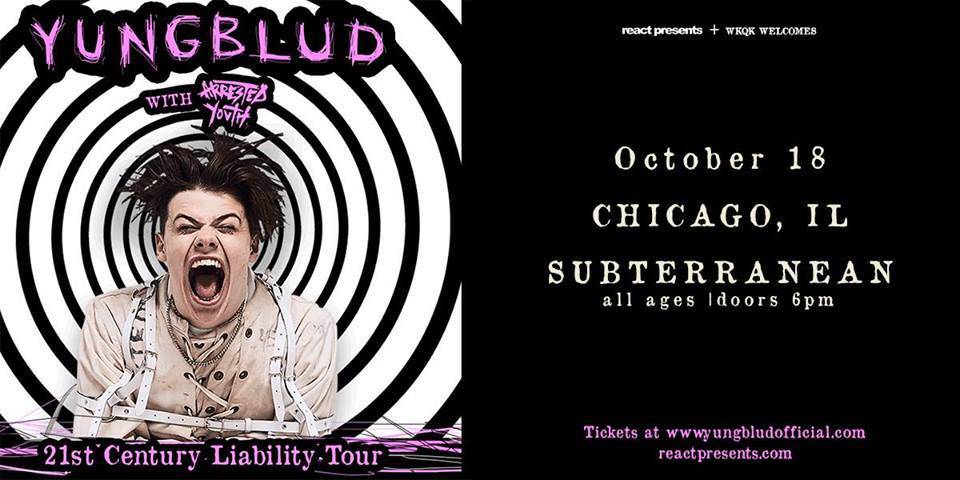 Chicago, Illinois (October 18, 2018) – Tonight at Subterranean in Chicago, Illinois is a night that will never be forgotten by hundreds of fans. After hours of waiting in line, they finally got in to see one of their favorite artists at yet another sold-out show, Yungblud.

To kick off the night, Arrested Youth took the stage, also commonly known as Ian Johnson. After quitting his full time job working in corporate America he began to pursue music full time and released his debut single “My Friends Are Robots” in 2017. On September 27, 2018 he released his debut album FEAR which talks about a number of issues that affects everyone, especially the youth of the 21st century. The album discusses topics of growing up in a social media controlled world, press, mental illness, violence, and extreme uncertainty. With his music providing a refreshing view to a number of social issues that relates to todays youth generation, there was a connection between everyone in the room like no other. Joining him on stage was guitarist Aaron Shadrow and drummer Gavin Gottlich. The lively and raw performance from the three of them is exactly what the crowd needed to prepare for what is to come.

Next up was the man of the night, Yungblud also known as Dominic Harrison originally from Yorkshire, United Kingdom. Being only in his early 20s, he has already begun selling out shows around the world. The alternative rock singer with bold and emotional lyrics adds something completely different into the classic genre. Being the dedicated artist that he is, after he broke his ankle on stage during a show in Houston, TX on October 13, 2018 that didn’t stop him from not only continuing the show till the end, but it didn’t stop the tour, and that is only one reason he is adored by so many. Once he began to hop down the stairs onto the stage the crowd went absolutely wild. Even with a broken ankle he still had one of the most energetic, happy, and hype performances I have ever seen. With a smile on his face and on every persons face in the crowd throughout the entire show, you could tell he was unable to contain his joy and excitement for what he does. To make everything even better, after over an hour of performing with a broken ankle on stage he sat by the merch table to meet every single fan in the sold-out venue. His set included a number of songs off of his album 21st Century Liability like fan favorites “Medication” and “Kill Somebody” and some of my personal favorites “Anarchist” and “Psychotic Kids”.

As the night came to an end, not a single person left the venue feeling disappointed, including the parents sitting at tables waiting on the third floor.