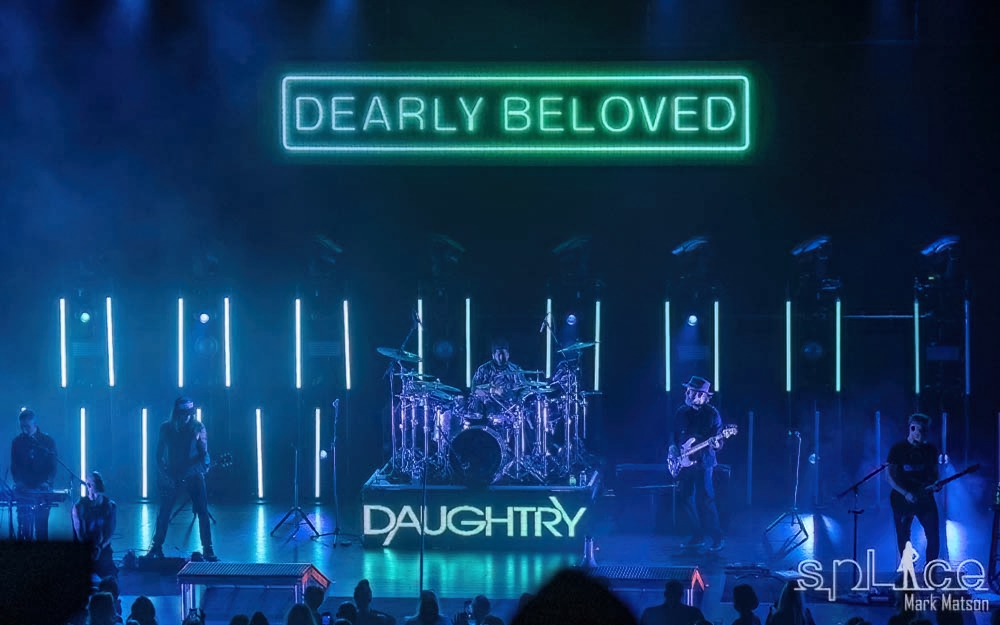 It’s a glorious Thursday night in sunny southwest Florida. While some people are looking forward to seeing one of the area’s renowned sunsets, all the rockers in Clearwater and Tampa were planning on doing some pregaming for the upcoming weekend and catching what had to be the hottest show in the state of Florida. Tonight, Clearwater’s Ruth Eckerd Hall is playing host to Daughtry’s Dearly Beloved Tour. While getting to see Daughtry would make for a great concert, on this tour they made it truly one stout show by adding Tremonti to the bill.

For those that aren’t in the know, Tremonti is the brainchild of all universe guitarist and namesake Mark Tremonti. Mark first shot to fame as the guitarist for 90’s monster band Creed. As Creed went by the wayside and morphed into Alter Bridge with the addition of incredibly talented singer Myles Kennedy, Tremonti found a home for his formidable talents. While he was happy with the band, he had written material that he felt was too heavy for Alter Bridge. So, he decided to create a side project for this material. Thus, Tremonti the band was born.

Having released their latest album Marching In Time not too long ago, the band had some great new material to wow the enthusiastic crowd at Ruth Eckerd Hall. It was from this very album that the band went to for the opening number “Thrown Further”. With the band hitting the stage in darkness, except for the name Tremonti emblazoned above Ryan Bennett’s drum kit. As the band launched into the song the lights came up along with swirling spotlights. While known primarily for his guitar work, Mark Tremonti decided to step out front for his own band. Standing center stage and singing while playing his guitar he looked supremely confident. There was no trepidation of being out front. But then again after five Tremonti albums he has grown squarely into the role of the front man.  This was a great choice to launch the show. The rhythm section of Ryan Bennett’s powerful drumming and bassist Tanner Keegan provided a driving high energy platform for Tremonti and fellow guitarist Eric Friedman to work their magic.

As they are in full support of their latest album Marching In Time, half of the criminally short eight song setlist was from this collection.  The next song they played was “If Not For You”.  Just like the first song played, the band sounded great. Tremonti did a great job delivering the lyrics, and of course his playing was amazing. But the hidden treat of the band is rhythm guitarist Eric Freidman. Not only does he provide some mighty fine guitar work of his own, but his backing vocals mesh perfectly with Tremonti’s really giving all the songs depth and texture.

With only enough time for a meager eight songs, the guys made the most of their set. If you were dying to hear one of their hard driving songs, they did not disappoint.  “My Last Mistake” off of Dust fit the bill perfectly.  Mark and Eric provided rapid fire riffs while Ryan and Tanner’s rhythm work propelled the song along. If you wanted something more commercially accessible, they dipped into their critically acclaimed album A Dying Machine for “The First The Last”. This song definitely proves this band can slow things down and still deliver an authentic performance. The final song of the night may well be the perfect song to close out a show “Wish You Well”. While lyrically it is a poignant song, but the driving beat and the chorus of “I wish you well” drove all the fans into a frenzy.

With half the night done, it was getting time for the main act Daughtry to hit the stage. Just like Tremonti, Daughtry is the namesake of the lead singer Chris Daughtry. If you never owned a TV or just refused to watch one, Chris Daughtry shot to stardom on the star making show American Idol. An alumni of season five, he made it to the top four and was a surprise elimination. This even included a highlight performance of Fuel’s “Hemorrhage” that even got him an invite to be their new lead singer.  With six studio albums under his belt including his latest effort Dearly Beloved which this tour is named after, there would be plenty of great songs on tap for the night.

With the house lights dimmed, high up on the stage the words Dearly Beloved were having individual letters flashing on and off at random. When all the band members finally on stage all the letters of Dearly Beloved stayed on. Under moody blue lighting, the band launched into “Desperation” from Dearly Beloved. The lighting matched the brooding delivery Chris Daughtry brought to the song. He really brought his A game with this one. His range went from an aching heart felt all the way to huge, powerful intensity. Of course, with Chris playing guitar as well as Josh Steely and Brian Craddock there was plenty of menacing guitar work on stage that helped to create the mood.

Now that the crowd was good and warmed up, it was time to crank things up to eleven. The band kicked into “World On Fire” the first single off of Dearly Beloved. This up-tempo rocker is a song that is built for live performances. Standing at the front of the stage, Chris started the song holding a megaphone with one hand and his mic in the other while singing into the megaphone. He would switch up singing some verses and the chorus in his own voice. It’s knockout performances like this that has garnered him a ton of fans.

With show firmly in high gear and the crowd boisterous, Chris said to the audience “Despite everything that is going on in the world right now, I do believe changes is coming”. With a flourish from drummer Brandon Maclin, the band launched into the latest single “Changes Are Coming”. This mid-tempo rocker has everything you could ever want and is built for live performances. Powerful drumming, check. Great guitar work with timely solos and fills, check. Choruses that audiences WILL sing along to, check. And of course, soaring vocals delivered perfectly by Chris.

During the show, the band left the stage, and Chris grabbed an acoustic guitar. Standing center stage with a single spotlight on him, he asked for the lights to be shut off and asked everyone to turn on the lights on their cell phones. With everyone’s cell lights on, he said that is much better, and he was right. All the lights created some incredible ambience that no stage lighting could ever create. He then went into his very first single “Home”. With the audience taking over at times to his delight, this was one of those moments that make live music such a special event.

Daughtry and the gang capped off the night with a rousing performance of “Asylum”. Imploring the audience to get up when the song kicked in, this was a request you seemingly had no choice but to follow.  The energy and intensity level built on itself with each passing note, and a perfectly timed pause mid song ratcheted up the tension in just the right amount. An incredible way to cap off a night of music for sure.

This nights show is what live music is all about. There were incredible performances by both bands. The level of musicianship was absolutely top notch. The stage lighting matched the mood and tempo of each song. Most importantly, both bands connected with the audience. Tremonti and Daughtry both understood that the best shows are when everyone is in this together and wrapped up in the journey of the night. While the year may young and there will be more concerts to come, this tour is going to be a tough one to top.