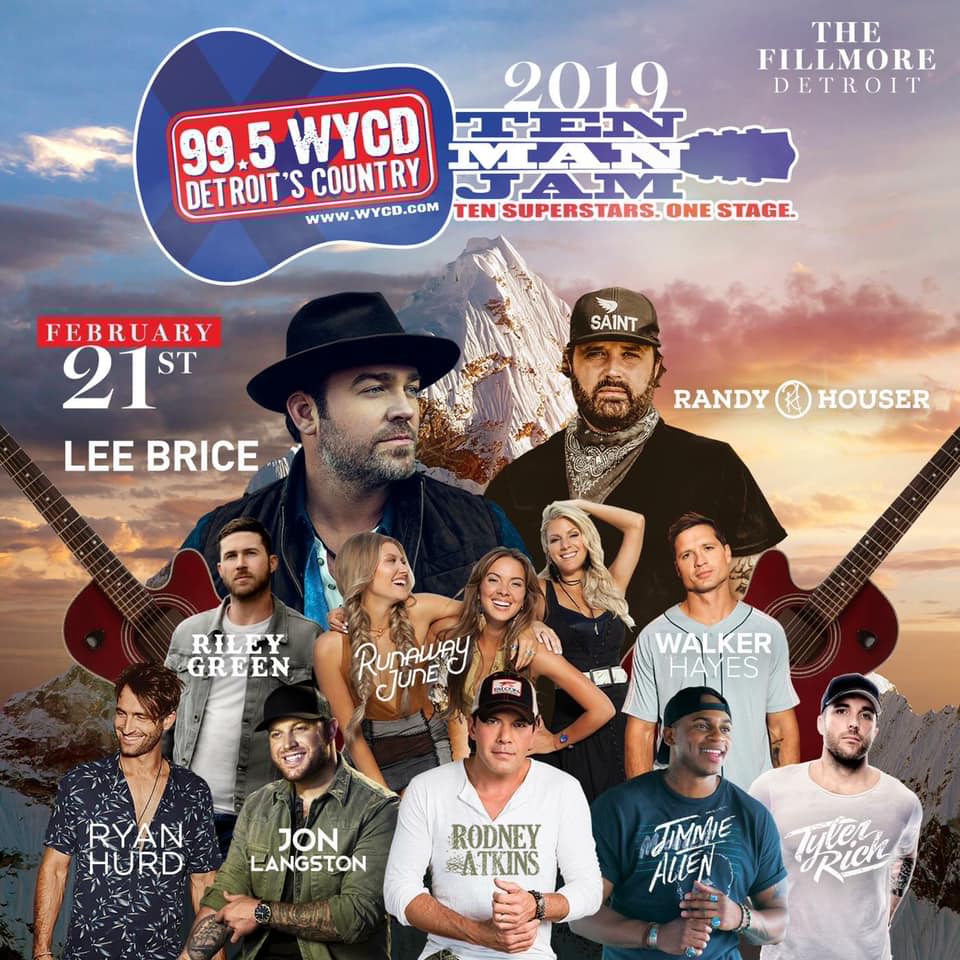 Detroit, Michigan (February 21, 2019) – The Fillmore Detroit was the place to be for country music fans Thursday night as the annual 99.5 WYCD 10 Man Jam took center stage. This unique, annual concert brings some of the biggest and brightest artists in country music to the Motor City, to play on one stage, in a very different setting than fans are accustomed.

Historically, this is one of the hottest country music showcases in Detroit and tickets are always in high demand. But no matter how well you have done in life, you just can’t just buy tickets for this show anywhere. The only way you can get in the door is by winning tickets from one of 99.5 WYCD‘s live call in contests or be on hand at one of their sponsored events. To spread the wealth around and to help out the fans that just didn’t have any luck or couldn’t make an event, local “ticket drops” at specific locations in the tri-county area were also held.

Lucky ticket winners this year where treated to two sets of back to country favorites from this years artists Lee Brice, Randy Houser, Tyler Rich, Jon Langston, Runaway June, Riley Green, Ryan Hurd, Walker Hayes, Rodney Atkins and Jimmie Allen. The format for the night had the artists split into two groups with a 30 minute intermission between each set. Each artist would take the stage, one at a time, perform 1 song and then the next artist would join in. This went on until all five artists from that particular grouping wound up on stage together where they would then take turns performing fan favorites, each specifically chosen for the 10 Man Jam.

The first group to hit the stage featured Atkins along with Langston, Hayes, Rich and Green who where each individually welcomed by the overly enthusiastic crowd. Not all went as planned though as Tyler Rich missed his ensuing stage call. When he finally appeared a few minutes later, he proclaimed that he was “Downstairs taking shots with the WYCD crew”!

After a short intermission, the second groups set began, lead by current National touring headliner Randy Houser. His red-hot version of his hit “How Country Feels” got the crowd on their feet and singing back at Houser right out of the gate. Following an opening like that is a tough act to follow by any performer yet alone a relative newcomer. But in a brilliant move by the line-up planners, Kalamazoo, Michigan’s own Ryan Hurd was scheduled up next. Hurd performed the massive hit “Sunrise,Sunburn,Sunset” that he penned for country superstar Luke Bryan. Being a hometown performance, Hurd undoubtedly received the loudest ovation of the night. Soon to follow was Jimmie Allen with “American Heartbreaker”, Runaway Junes “Wildest West” and the nights headliner Lee Brice with his over the top hit, ”Drinking Class”.

Thursday was more than great country music and a fabulous party inside The Fillmore Detroit. It was a day full of artist interviews along with meet and greets held at the Music Town studios a few doors down Woodward. If you couldn’t make it to the concert or Music Town, live feeds were available to keep you up to date on all the happenings. WYCD has perfected a fabulous event and they do it just for their fans, totally free.

Lets hope the 99.5 WYCD 10 Man Jam continues to flourish and we continue to see the brightest country stars in this setting for years to come. Take a minute next time you see a staff member of WYCD and tell them thank-you for what they do. They deserve all accolades they receive and maybe, just maybe the reason they continue to be Detroit’s # 1 for New Country!