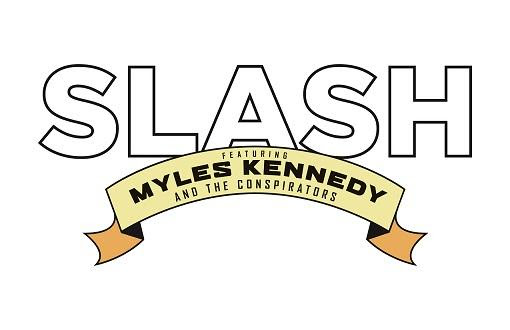 As SLASH FT. MYLES KENNEDY AND THE CONSPIRATORS crisscross the country with sold-out headlining shows on their first tour in over four years, the group is celebrating the release of LIVING THE DREAM, their third studio album and first full length in over four years.

Fueled by the Top 10 rock song “Driving Rain,” and its new live-action, animated video as well as the best critical acclaim of their career (see below) LIVING THE DREAM (out via Snakepit Records, in partnership with RoadRunner Records), has debuted with 10, Top 10 chart placements around the world. The album also hit #1 on the Top Hard Music Album chart, #3 on the Rock Chart, #9 on the Top Current Albums chart and #27 on the Top 200 chart. The first single “Driving Rain” jumped to #6 this week and climbing–marks the band’s 6th consecutive Top 10 single at radio and SLASH’s fastest-rising single ever in his solo career yet. The band performed “Driving Rain”–which Rolling Stone described as delivering “bluesy riffs and solos throughout the blistering track” and Revolver hailed as “smoldering”–on “Jimmy Kimmel Live!” HERE and another new song “Mind Your Manners” HERE. Purchase LIVING THE DREAM or stream the album here: https://roadrunnerrecords.lnk.to/livingthedream.

The group’s strongest collective statement to date, LIVING THE DREAM is the new full-length offering from the group which, in addition to SLASH and singer MYLES KENNEDY, also includes bassist TODD KERNS, drummer BRENT FITZ and rhythm guitarist FRANK SIDORIS.

From the barnstorming, high-octane riffery of opener “Call of the Wild” to the wah-drenched funk rock of “Read Between the Lines,” the haunting majesty of “Lost Inside the Girl” to the swaggering deep-in-the-pocket Seventies grooves of “Serve You Right,” to the stately, quasi-classical melodic themes of “The Great Pretender,” LIVING THE DREAM packs a compendium of sounds and styles into 12 tightly arranged and sharply executed tracks, all of it shot through with SLASH’s trademark electrifying and dynamic riffing and high-wire, lyrical solos.

2018 marks a fresh start for SLASH FT MYLES KENNEDY AND THE CONSPIRATORS who are currently in the midst of their first tour in over four years and are already performing to sold-out crowds nationwide. Check out a sampling of the top critical acclaim the band and LIVING THE DREAM have received, so far:

“[On the] bluesy new song, ‘Mind Your Manners,’ from the group’s upcoming album Living the Dream. The guitarist alternates between ragged power chords and squealing solos throughout the song; on the chorus, Kennedy layers his voice into stacked harmonies.”

“a dynamic, high octane 12-song collection titled Living The Dream. It’s a mix of straightforward, explosive riff-rockers (‘The Call Of The Wild,’ ‘Mind Your Manners,’ ‘Sugar Cane,’) and more epic and layered compositions (‘The Great Pretender,’ ‘The One You Love Is Gone,’ ‘Lost Inside the Girl’); further studded with all manner of slight stylistic diversions, from funky wah-drenched workouts (‘Read Between The Lines’) to swaggering, Seventies-style stomp rock (‘Serve You Right’) and hook-filled, soaring anthems (‘Boulevard of Broken Hearts’ and first single ‘Driving Rain’).”

“Living the Dream is arguably their best album yet. ‘Call of the Wild’ accomplishes exactly what you’d want out of an album opener, grabbing your attention with some start-stop guitar licks. It’s a standout amongst many on the album and a great way to kick things off. ‘Serve You Right’ keeps the energy level high, but more slinks along with Slash’s ’70s-vibe guitar playing. It’s a solid change of pace that leads into the chugging rocker ‘My Antidote’ and the album’s most infectious, rock radio single ‘Mind Your Manners.’ Living the Dream is filled with potential hits.”
–Chad Childers, LOUDWIRE (9/20/2018)

“After eight years together Slash and Kennedy clearly have a musical bond and Slash, showing no rock star ego, let Kennedy and the band shine…. All told, the band played five new tracks — the aforementioned ‘Mind Your Manners,’ The Call Of The Wild,” ‘Driving Rain, ‘My Antidote’ and ‘Serve You Right’ focusing on the fastest, harder-edged tracks from the Conspirators’ catalog. The rest of the set included material from his Slash’s first solo album as well as the Conspirators’ World On Fire. The night’s one GNR track, ‘Rocket Queen,’ electrified the venue as Kennedy more than held his own on the higher octaves.”
–Steve Baltin, VARIETY, live review (9/15/2018)

“It’s a statement that the man himself has lost none of his artistic spirit, his creative drive and, even in cleaner 50s, his famed rock & roll ‘tude; its evidence that this group of musicians have evolved into a finely tuned machine; and it just might be the best full-length record that Slash has been involved with since the Use Your Illusions in ’91. …” there’s a genuine hunger, a raw energy on display on this album… [‘The Call Of The Wild’ is] proof he’s chomping at the bit, even now, to create snarling, hard-hitting rock & roll.”

“’The Call of the Wild’ blasts things off in spectacular fashion, while ‘Mind Your Manners’ and
‘Driving Rain’ feature the kind of unrelenting boogie rock’n’roll that would make the perfect accompaniment to a bar-room brawl. …fast, fun, filled with tasty licks and imbued with its own brand of denim-clad authenticity.”

SLASH FT MYLES KENNEDY AND THE CONSPIRATORS current tour dates are as follows: 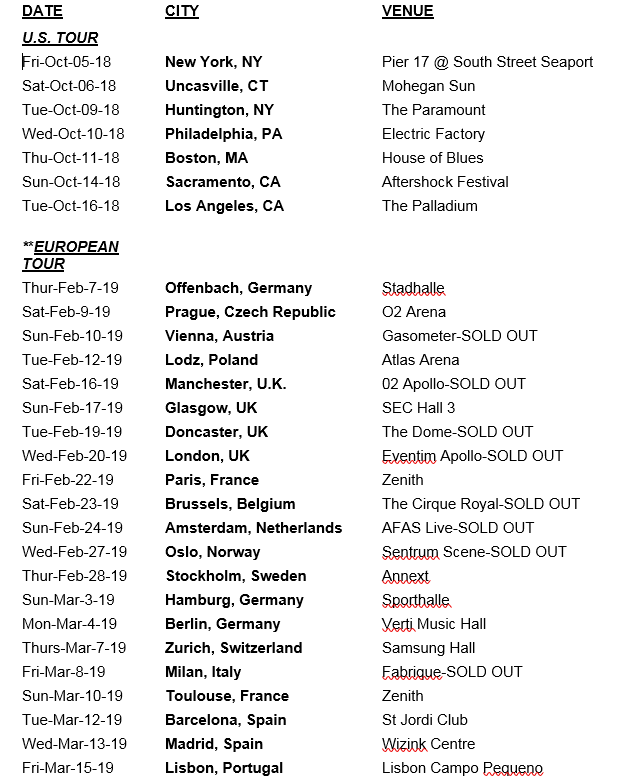