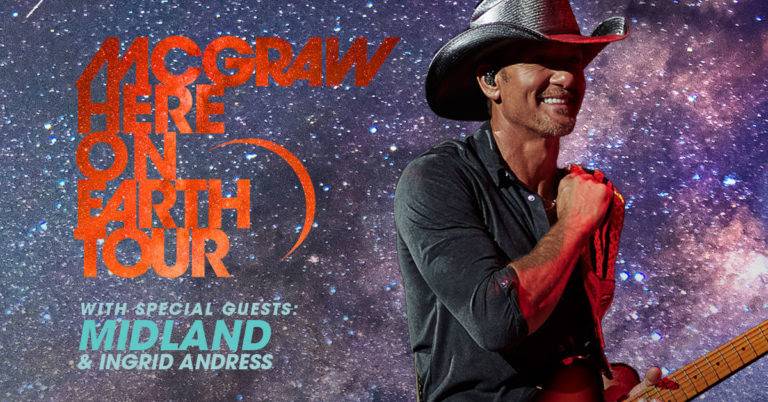 Tim McGraw started the year off right with a headline show at the College Football Playoff Game, performing his new song “Way Down” from a forthcoming album later this year & his Nielsen BDS certified ‘Most Played Radio Song of the Decade’ hit “Something Like That,” and simultaneously announced the major HERE ON EARTH TOUR for 2020. McGraw will join forces with reigning CMA Vocalist of the Year Luke Combs for two can’t-miss summer stadium shows in Philadelphia and Los Angeles. Special guest Midland will join the entire tour, and Ingrid Andress will open the show on all dates. Produced by Live Nation, the tour will cross the country beginning in July and ending in September and will be part of Live Nation’s Megaticket program. Fans can first purchase tickets beginning Jan. 24th for select cities as part of Live Nation’s Country Megaticket at www.Megaticket.com. To be a part of future pre-sales, fans are encouraged to go to www.timmcgraw.com and become a part of MCGRAWONE. Pre-sale access for the Los Angeles and Philadelphia stadium shows will also be available for Luke Comb’s fan club group The Bootleggers.

“Anyone who knows me knows how much I love to be outside in the summertime playing music. Everyone is there, sharing the moment, having fun and letting loose,” says McGraw. “To be here on earth in this moment, together, sharing our love for music and getting through all that life is throwing us — that’s what it’s all about.”

Tim McGraw has sold more than 50 million records worldwide and dominated the charts with 43 worldwide No. 1 singles. He’s won 3 Grammy Awards, 16 Academy of Country Music Awards, 14 Country Music Association Awards, His iconic career achievements include being named BDS Radio’s Most Played Artist of the Decade for ALL music genres and having the Most Played Song of the Decade for ALL music genres. He is the most played country artist since his debut in 1992, with two singles spending more than 10 weeks at No. 1. His career-long tour successes include the record-setting “Soul2Soul The World Tour 2017” with his wife, Faith Hill. McGraw starred in and narrated the hit movie “The Shack” and co-wrote and performed the closing credit song for the Oscar nominated documentary “Free Solo.”  His other movie credits include blockbuster hits “Friday Night Lights” and “The Blind Side. McGraw co-authored the New York Times Best Seller, Songs of America: Patriotism, Protest and the Music that Made a Nation with Jon Meacham and enjoyed a critically acclaimed multi-city book tour featuring conversation and music from the book. McGraw is the founder of health and fitness brand, TRUMAV and recently authored a New York Times Best Seller health and fitness book Grit & Grace: Train the Mind, Train the Body, Own Your Life. As part of the host committee, McGraw welcomed the largest outdoor crowd ever to his Nashville performance at the 2019 NFL Draft. He also appeared in the NFL Tailgate Party for Super Bowl LIII.
(TW/IG: @TheTimMcGraw, FB: TimMcGraw, timmcgraw.com)

About Luke Combs:
Luke Combs is a multi-platinum, award-winning musician from Asheville, NC, who stormed onto the music landscape as one Country’s brightest stars. His new album, What You See Is What You Get, was released last fall via River House Artists/Columbia Nashville and debuted at #1 on both the all-genre Billboard 200 chart as well as Billboard’s Top Country Albums chart. The record, which enjoyed the largest streaming week ever for a country album with 74 million on-demand streams, features 17 songs including the five tracks previously released via his The Prequel EP as well as collaborations with Brooks & Dunn and Eric Church. Upon its release last summer, all five tracks from The Prequel charted on Billboard’s Hot Country Songs Top 25—a feat not accomplished since Johnny Cash in 1959. Additionally, Combs’ current single “Even Though I’m Leaving” recently spent its third week at #1 at country radio, making it Combs’ seventh consecutive #1—a first on Billboard’s Country Airplay chart. Adding to his monumental year, Combs’ double Platinum debut album, This One’s For You, recently spent its 50th non-consecutive week at #1 on Billboard’s Top Country Albums chart—tying the record for longest reign atop the chart. It was also the most-streamed country album of 2019. An ACM, CMA, CMT and Billboard Music Award-winning artist and GRAMMY nominee, Combs will kick off his “What You See Is What You Get Tour” next month.