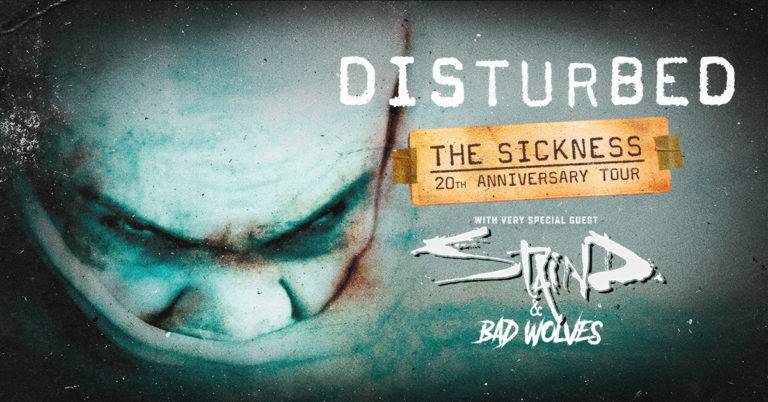 (January 27, 2020) – This morning, two-time Grammy nominated and multi-platinum band, Disturbed confirm their extensive 31-date The Sickness 20th Anniversary Tour throughout North America, co-produced by Frank Productions and Live Nation. The amphitheater tour, with very special guest Staind and Bad Wolves, celebrates the two-decade anniversary of the band’s seminal album, The Sickness. On this tour, the band will perform songs off the album, as well as tracks from their most recent studio release, Evolution, and their extensive catalog. The Sickness 20th Anniversary Tour will run from mid-July through mid-September, with dates in cities including Tampa, Toronto, Cincinnati, Phoenix, and Irvine (full dates below).

Tickets will go on sale Friday, Jan. 31 at 10 am local time (with the exception of the Rogers, AR show which will go on-sale at 12 pm local time) here. Select pre-sales will begin Tuesday, Jan. 28. Special VIP, meet & greet, and merch bundle packages are available for all dates – more info HERE. Disturbed’s tour will also be a part of Ticket to Rock 2020, an exclusive ticket package at select Live Nation amphitheaters across the country—additional details to be announced, for more info: tickettorock.livenation.com

Disturbed also share a new music video for “Hold on to Memories” directed by Matt Mahurin, who also directed their “Sound of Silence” music video. The video is inspired by the Mexican holiday “Día de Muertos,” a day of remembrance and celebration of loved ones who have passed, with which it shares the sentiment that as long as we keep their memories with us, a piece of them is still alive.

The band previously shared their live video for “Hold on to Memories,” directed by Rafa Alcantara. The video captures a moment during Disturbed’s live show where the band perform alongside a video collage of their favorite memories, with photos and videos of their friends and families, both here and gone.

Disturbed have continued their record-breaking streak at rock radio, claiming the title of “2019’s Most Played Artists” in the Active Rock format. The band earned their seventh consecutive #1 on the Mediabase Active Rock Chart and Billboard’s Mainstream Rock Songs Chart with their latest single “No More,” an achievement unmatched by any artist in history. Disturbed have earned ten #1 singles on the chart, including “A Reason To Fight,” the track that initially broke the record earlier this year. “No More” is the third top-charting single from the band’s #1 album, Evolution (Reprise Records).