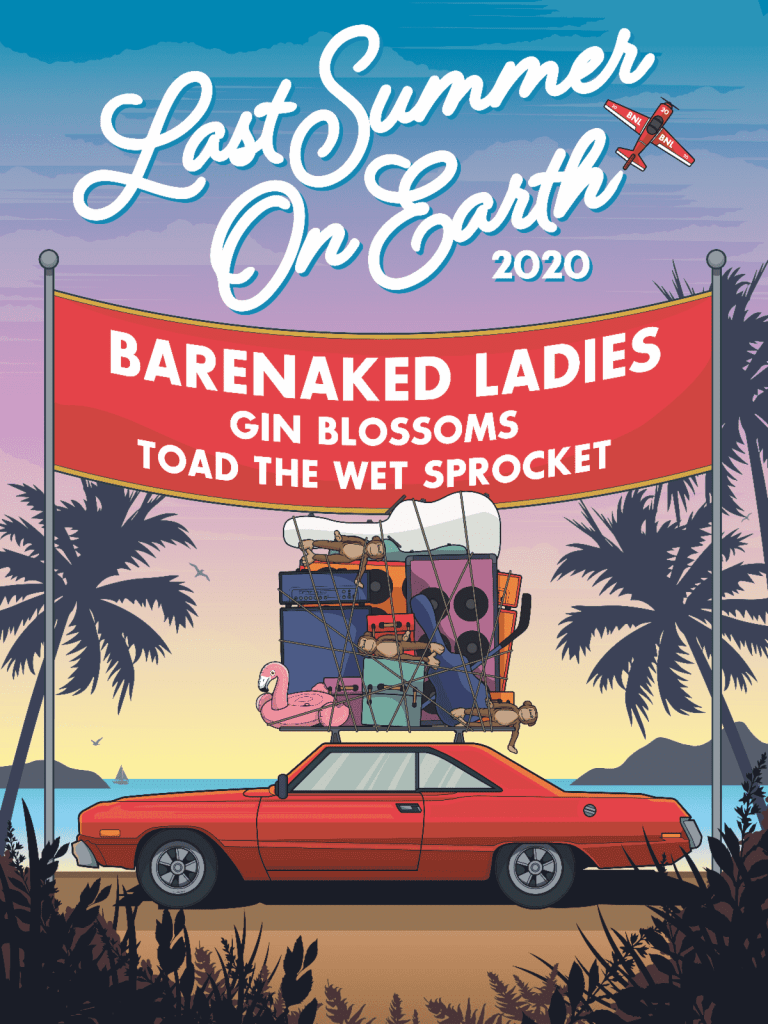 Tickets on sale to the public on Friday, January 24

“Barenaked Ladies’ energy was contagious and set the stage for what would be a high-energy evening of sing-alongs and throwback hits.”
Billboard

“We’re looking forward to getting back out on the Last Summer On Earth tour,” vocalist/guitarist Ed Robertson shares. “Having Gin Blossoms and Toad the Wet Sprocket out with us is going to be a blast. That’s a LOT of hits per night!”

Following their critically-acclaimed 2019 tour with Hootie & the Blowfish, Barenaked Ladies is ready to hit the road again and bring out all the fan favorites that have built them a long-lasting career and worldwide fanbase. The Toronto-based “cult fave” (Paste Magazine) -who have now sold over 15 million albums worldwide and earned multiple JUNO Awards and Grammy nominations- are also set to release new music in May of this year.

The tour will find Barenaked Ladies playing major venues all across North America, including stops at the Greek Theatre in Los Angeles, Red Rocks, SummerStage in New York City and more, with the tour finale at Toronto’s Budweiser Stage, with special guest Kim Mitchell also on the bill. These dates follow their string of shows in the spring throughout the UK, which will culminate with a sold-out show at London’s legendary Royal Albert Hall.

This will be the 6th edition of the tour, founded by the band in 2012 – the year that the Mayan calendar predicted would be the last, hence the “Last Summer On Earth”. Barenaked Ladies headline and bring some of their best friends and favorite bands along for a summer of good times, and of course, great music. Past acts include Cracker, Big Head Todd & the Monsters, Blues Traveler, Guster, Ben Folds Five, Violent Femmes, Colin Hay, OMD, Howard Jones, Better Than Ezra, and KT Tunstall.

“We know the Mayan Calendar was wrong about the end of the world,” adds Ed Robertson, “but could they have been THAT wrong?! C’mon out and rock with us like it’s your Last Summer On Earth!”

VIP packages for Barenaked Ladies will be available which include premium seats and merch packages. The Gold packages will include pre-show soundcheck parties and meet-and-greet.

The band just launched Barenaked Bytes, the official Barenaked Ladies app. The app will have news, information, and merch. Fans who download the app will have first access to tickets and VIP packages starting January 21st at 10am local time, with the purchase of a Barenaked Bytes bundle. Fans who have previously purchased VIP packages will receive an exclusive code to purchase pre-sale tickets on January 22nd. More information about fan pre-sales can be found here.

Each ticket purchased will include a digital download of Barenaked Ladies’ forthcoming album, which is due for release in May of 2020. VIP packages and album digital downloads may not be available in all venues.

All information on the Last Summer On Earth 2020 tour can be found at barenakedladies.com. Barenaked Bytes can be downloaded from the App Store and Google Play.

Over the course of their remarkable career, Barenaked Ladies have written a variety of top 20 hits (including radio staples “One Week,” “Pinch Me,” “If I Had $1,000,000”), garnered two GRAMMY nominations, won eight JUNO Awards, had Ben & Jerry’s name an ice cream after them, wrote and recorded the theme song to the TV series The Big Bang Theory, and participated in the first-ever “space-to-earth musical collaboration” with astronaut Chris Hadfield. The band has also been inducted to the Canadian Music Hall of Fame, and received a proclamation from Toronto Mayor John Tory declaring October 1st “Barenaked Ladies Day.” They are currently working on a new album, which will be their 16th studio album.

Formed in 1987 in the Arizona city of Tempe; Gin Blossoms’ blockbuster 1992 album New Miserable Experience spawned four Top 40 hit singles (“Hey Jealousy”, “Found Out About You”, “Until I Fall Away” and “Allison Road”), sold more than 4 million units, and established the band as one of the top rock groups of that decade. More than two decades later, Gin Blossoms continue to tour performing fan favorites, while also releasing new music, building on their already extensive catalogue. ginblossoms.net

ABOUT TOAD THE WET SPROCKET:

Celebrating over 30 years as a band, Toad the Wet Sprocket continue to make music and tour with the same spirit of unwavering independence that fans fell in love with on Billboard-charting hits like “Walk on the Ocean”, “All I Want”, “Something’s Always Wrong”, and “Fall Down”. The band share a special kind of musical chemistry that can only come from years of creating music with friends from high school. toadthewetsprocket.com