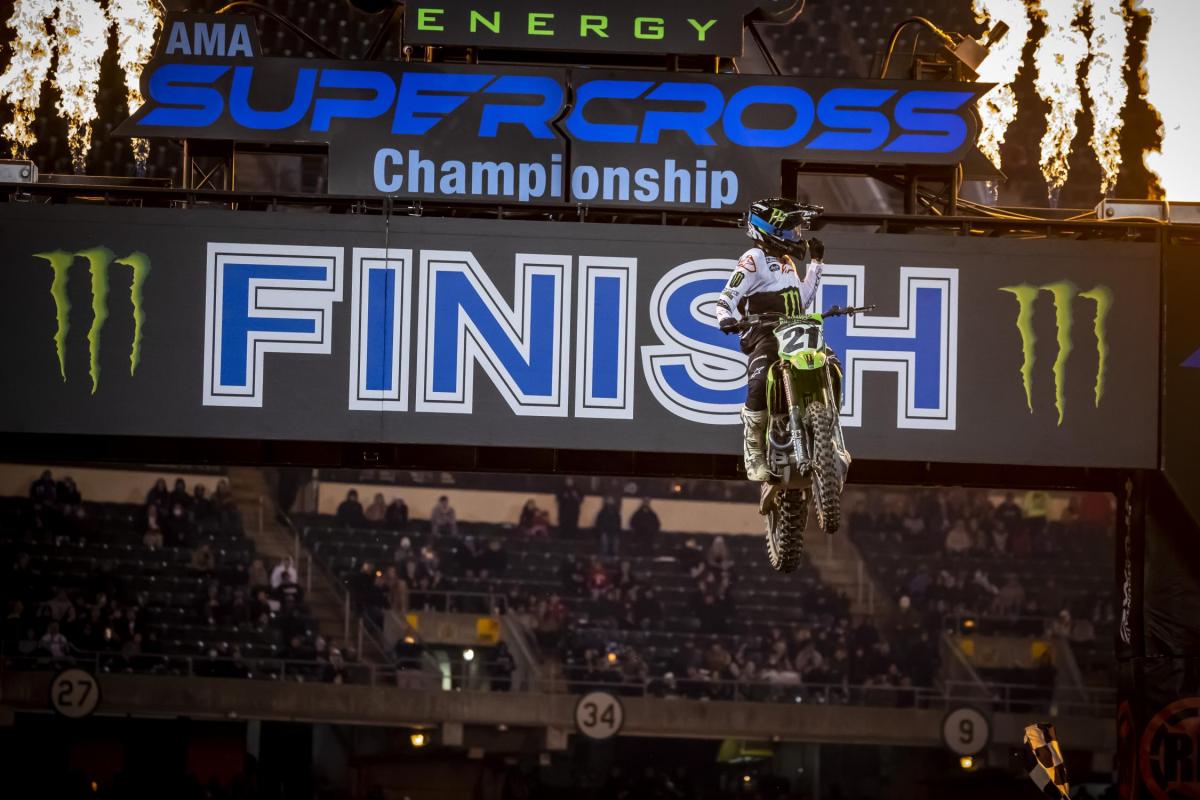 Oakland,California (January 15,2022)-Monster Energy Kawasaki’s Jason Anderson had an emotional return to the top of the Monster Energy AMA Supercross podium after 47 races without a win for the 2018 champ. Red Bull KTM’s Aaron Plessinger grabbed his best 450SX Class finish with a strong second place result in front of a crowd of 42,918 that encircled the track inside RingCentral Coliseum. Repeating his third place finish from the opening round, Troy Lee Designs Red Bull GASGAS Factory Racing’s Justin Barcia took third on the night and captured the points lead after two rounds of the 17-round series. In the Western Regional 250SX Class, Monster Energy Star Racing Yamaha’s Christian Craig followed up his opening round win with his first back-to-back Supercross victories.

Monster Energy Kawasaki’s Adam Cianciarulo grabbed the Holeshot and held the lead early ahead of a stacked field on the loose and fast Oakland track. Still recovering from a pre-season shoulder injury, Cianciarulo stayed up front for the first four minutes of the 20-minute plus one lap race before eventually dropping back to finish twelfth. It was teammate Jason Anderson, in only his second race on the Kawasaki, who took over the front spot and was never challenged for it. The victory was Anderson’s first win since his championship season in 2018.

Aaron Plessinger and Justin Barcia both started outside the top five but charged forward. Just past the five minute mark Plessinger took over second. Before the race’s midpoint Barcia advanced into third. The two riders would stay close but never challenge one another for a position change. Monster Energy Star Racing Yamaha’s Eli Tomac, the 2020 champion, steadily recovered from a mid-pack start. He reached fourth place with just over nine minutes on the clock but was not able to close in to make an attack on Barcia for a podium spot.

Red Bull KTM’s Cooper Webb was following a second place finish at the opening round but the defending champion was only able to fight up to seventh after a slow start. Opening round winner Team Honda HRC’s Ken Roczen started well but got shuffled back outside of the top five. Three and a half minutes into the race the Honda rider got out of shape in the whoops and crashed hard into a berm. Roczen would remount slowly and eventually finish thirteenth.

The series drops the gate again on Saturday night inside Petco Park in San Diego, California for Round 3 of the 17-round 450SX Class series and 9-round Western Regional 250SX Class racing. The all-day experience kicks off with FanFest in the pits and great racing after the sun goes down. Tickets are available for the exciting, family-friendly entertainment in stadiums and raceways across the U.S. All races are aired live on Peacock with airings also on NBC, CNBC, and USA Network. For ticket information, videos, photos, news, results, and features please visit supercrosslive.com.