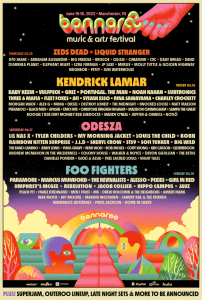 Last year featured Bonnaroo’s return for the first time since the COVID-19 pandemic, with their 2021 event cancelled last-minute due to flooding in the area. The festival space, once a jam band right of passage that has expanded to become a massive, multi-genre event over its two decades of operation, has cemented itself as one of the foremost festivals in the United States.

Both Kendrick Lamar and ODESZA released Grammy-nominated albums last year, with Lamar’s Mr. Morales & The Big Steppers nominated for Album Of The Year and Best Rap Album in the 2023 Grammy Awards and ODESZA’s The Last Goodbye nominated for Best Dance/Electronic Album.

Zeds Dead recently teamed up with fellow Bonnaroo performer GRiZ for their highly-anticipated single “Ecstacy Of The Soul,” a former ID fans had been waiting more than a year for release. Liquid Stranger, meanwhile, teamed up with J.Lauryn in December for the single “Smoke N Hope” released via his SSKWAN record label.

Early access on sale starts Jan. 12 at 10 a.m. CT, with signups now available. Hulu will serve as the official streaming platform for the event.