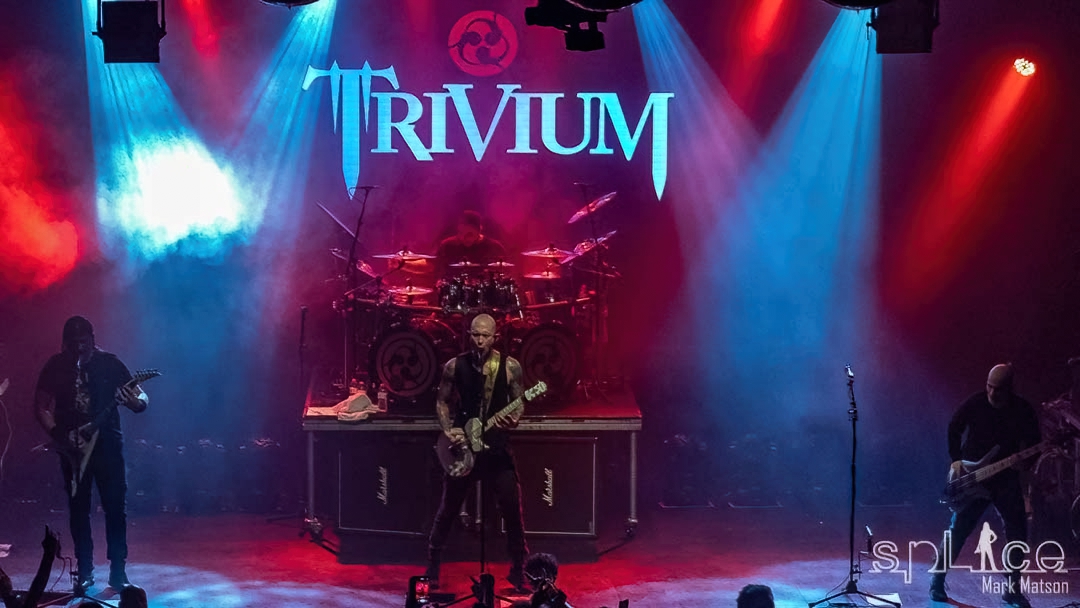 When Trivium released their critically acclaimed album What The Dead Men Say it was widely assumed that when the world returned to normal, they would do what most bands do, tour in support of it. While they did appear on the Metal Tour Of The Year in support of Megadeath along with Hatebreed and Lamb Of God this was only a limited tour and not the usual tour supporting an incredible new album. As that tour wound down fans were hoping that they would strike out on their own so they could hear their new material live.

To everyone’s surprise the band let it be known that even more new material was on the way. After releasing two singles “In The Court Of the Dragon” and “Feast Of Fire”, the band officially released their tenth album In The Court Of The Dragon in early October. What was equally exciting was the band also announced an album release party for their latest effort. This wouldn’t be just any release party; this would be a hometown show to be held at The Beacham in Orlando.

With this party being held in Orlando, the bands hometown, it was no surprise that the line to get in stretched well around the block. As the fans kept heading into The Beacham everywhere you looked it you would wonder how they could possibly fit any more people inside. It didn’t matter that this was a weekday evening, Trivium fans were out in force to see their band live. After letting two local bands get the night started it was now time for the main event.

The energy level in the packed venue was off the charts. To say that everyone was excited to see Trivium was an understatement. The only thing that could ignite the powder keg inside The Beacham would be those first few notes that the band would play. After a quick introduction by a local radio personality, guitarist and lead singer Matt Heafy, guitarist Cory Beaulieu, bassist Paolo Gregoletto, and drummer Alex Bent made their way out to a huge cheer by everyone there. Without hesitation they launched into “In The Court Of The Dragon” the first single from their latest album. As good as it sounds on the album, their performance of it blew it away. The energy that they brought to the stage was very much the equal of all the fans in attendance. They quickly followed it up with another favorite “The Catastrophist” one of the singles from their previous album What The Dead Men Say. The guitar work that both Cory and Matt brought to the stage that night was at an insane level.

At this point Matt let everyone know that so far this year the best crowd with the most energy was from Iowa. Obviously, this didn’t sit well with everyone, and boo’s rained down. Matt told everyone that he wanted the crowd to earn the title of the best energy. The band then ripped into “Amongst The Shadows & The Stones”. With Cory and Matt’s growling intro and Alex Bents incredible drumming leading into the song this gave the fans the perfect springboard to ramp up the energy in the building. As the song went on the mosh pits started open up and the crowd surfing started. While they have essentially two new albums to celebrate, they also do have eight other albums in their arsenal. Next up, they decided to dig back into their catalog and treated the crowd to “Rain” from their 2005 release Ascendancy.

Now it was time to play some more of their newer material and they chose the “IX” which flowed into “What The Dead Men Say” just like the album. Just like every song previously played, the energy level was insane. It was obvious that the guys were thrilled to be playing to an overly enthusiastic home crowd. Matt actually took time to let everyone know how happy they were to be playing a home show, and that it had actually been four years since they have played a show like this. When they got to “Until The World Goes Cold” you could barely hear Matt’s singing as the sheer volume of the audiences singing nearly matched his. In another first, the band debuted their next single from In The Court Of The Dragon “The Phalanx”. It is always great to be at a show when a band plays new material live for the very first time.

If there was any thought of Trivium letting the energy level drop even an inch there would be none of that as they killed it on their hit single “Strife” from the album Vengeance Falls. If one hit single was good to play, they decided to go for two when they followed it up with “The Heart From Your Hate”, which was another fan favorite to sing to. As the band seemed to be on a hit single binge, they kept the party going with their latest one “Feast Of Fire” off of their newest album. After a well-earned breather, and of course with fans repeatedly chanting “Trivium, Trivium, Trivium” they came out for one last song, and it was a classic “In Waves”. As Matt stepped up to the mic, he asked everyone to sing along and of course everyone obliged and they helped the band close out an epic performance.

For all the Trivium fans lucky enough to get a ticket to this show they got a rare treat. Instead of this night being a typical play the whole album in order show, they got a full-fledged concert chock full of new material from In The Court Of The Dragon as well as some of their greatest songs played with an absolute vengeance. The level of energy and brilliance that they brought to the Beachum more than made up for the four year absence.