Saint Petersburg, Florida (April 5, 2019) – It’s a perfect Friday night for a concert and it seems like half of St. Petersburg is lined up outside Jannus Live. Who could pull in such a huge crowd? The Revivalists, that’s who! With great songs, an amazing New Orleans-inspired party atmosphere, and of course a new album, Take Good Care, t’s no wonder that they sell out their shows, including tonight’s concert!

From the moment The Revivalists hit the scene in 2007, the buzz on this eight-piece band continued to build. With an eclectic mix of jazz, R&B, funk, soul, and of course, rock that only could only be brewed up in New Orleans, it’s easy to see why The Revivalists have built up such a diverse and huge following. Building on their 2015 release, Men Amongst Mountains, and its mega hit “Wish I Knew You”, The Revivalists released Take Good Care at the tail end of 2018 and already had its first chart topper with “All My Friends”. So, the smart fans wisely purchased their tickets before the show sold out got to hear their favorite band deliver its new material.

When the lights went down and time for the show to start everyone was thrilled. From the moment the guys in the band picked up their instruments, the party kicked into high gear. Of course, with their new album out, their setlist relied heavily on the latest release, with their latest hit song, “All My Friends”, being one of the early favorites being played. Throughout the night lead singer, David Shaw, wowed the audience with his rich soulful voice.

One of the great things about a Revivalists concert is it’s a feast for the eyes, as well as the ears. With so many talented musicians on stage obviously having a great time, you can’t help but be swept up in the fun. From saxophonist Rob Ingraham singing and dancing, the dueling drums of PJ Howard and Andrew Campanelli, and of course David Shaw stalking the stage and getting the audience even more into the show, it’s easy to see why their shows always sell out.

As the party continued on into the night, the packed house was singing along and dancing as much as they could. When they played their big hit “Wish I Knew You” it was definitely one of the big moments of the night. One tradition The Revivalists do in concert is play one cover song. You never know when or what they will play, and with the musicianship they have, they could play just about any genre of music. Tonight, in the first of two encores they played the Fine Young Cannibals hit song “She Drives Me Crazy”. They did such an amazing job with it that if you didn’t know any better you would have thought it was one of their own songs. As the show ended and people streamed out, the smiles on everyone’s face told the tale of an amazing night with a band that they dearly love.

Since the release of Take Good Care, The Revivalists continue to build on their success and grow their considerable fan base. With the great music they are making and their shows having one hell of a party atmosphere it’s easy to see why this is a must see concert. So, keep an eye out for the Take Good Care Tour. 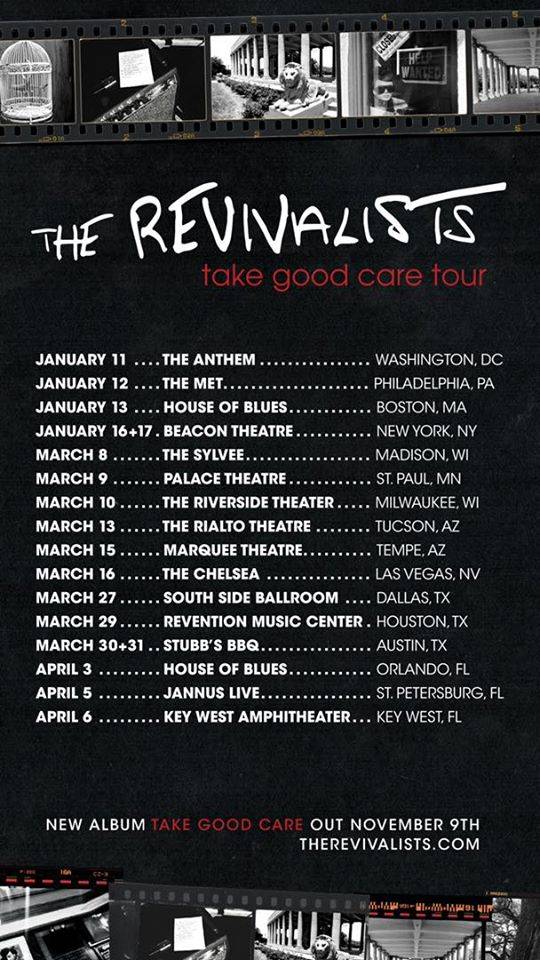