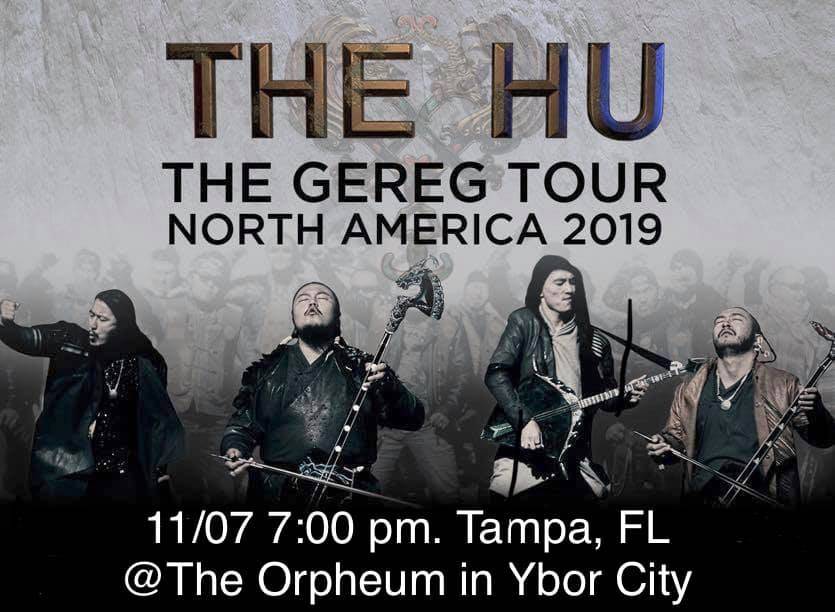 Tampa, Florida (November 7, 2019) – When you think of great areas for hard rock incubation, United States, The United Kingdom and Germany often come to mind. Not a soul would list Mongolia as a cradle for that style of music. So, when The Hu burst on the scene, they knocked everyone on their collective ear. Their unique music and videos left their new fans frothing at the mouth to see these phenoms live and in person. Obviously, a tour was planned; when it was announced, it became the hot ticket and sellout shows were the norm. This was the exact case at The Orpheum In the Ybor City section of Tampa, Florida.

As the Doors to The Orpheum opened, the crowd that was lined up around the building poured into the venue. All the fans that patiently waited outside for hours were rewarded with prized spots right at the stage of this standing room only club. By the time the lights dimmed to let everyone know that the band would be taking the stage, The Orpheum was fully packed, and the crowd was spilling out into the street. As all members of The Hu took to the stage, the looks on their collective faces was one of surprise yet thrilled as well. While their shows have been selling out on this inaugural tour, you could see that the newness of this experience hasn’t worn off on them. The two string players were dressed in traditional Mongolian garb, while the rest were in jeans and t-shirts. They picked up their eclectic mix of instruments, several traditional Mongolian string instruments, guitars and drums as well as traditional electric guitars and drums and launched into “Shoog Shoog”. The second they started playing, the boisterous crowd instantly quieted down to hear every nuance of their song. With their trademark throat singing and unique mix of instruments they deftly blended traditional Mongolian music with rock to create something that no one in this country has ever heard. Judging by the cheers after the first song and the chants from the audience of “Hu! Hu! Hu!”, their music was an overwhelming hit.

Next up, was another song from their hit album The Gereg, “The Same”. Just like the first song, not a peep was heard from the crowd. Yet all eyes and ears were completely entranced by the performance. Throughout the night they enthralled the capacity crowd with songs like “The Gereg”, “The legend Of Mother Swan”, and “Shireg Shireg”. It was surprising to everyone that they also included the use of the mouth harp and a flute as well while performing. While the members of the band barely speak any English, frequently they would give a heartfelt thank you to everyone to the capacity crowd. Of course they included their big hit “Yuve Yuve Yu”. While the version they played tonight was the original one and not the radio version featuring Danny Case From Ashes To New, it was still greeted with huge cheers and people singing the title during the song. As they finished their final song “Black Thunder”, as loud as thunder the audience was cheering wildly and chanting their name. With that, they came back out for one final song “This Is The Mongol”. Afterwards they gave another appreciative thank you and bowed gratefully to the adoring audience.

This was a wildly successful night for not only The Hu, but for all their newly formed fans as well. With another sold out show under their belt, The Hu is cementing themselves as more than just a phenomena, but a truly unique and brilliant band that has created a genre unto themselves. For all the lucky people that managed to snatch up tickets for this show, they will be the ones that can say we saw their very first tour.