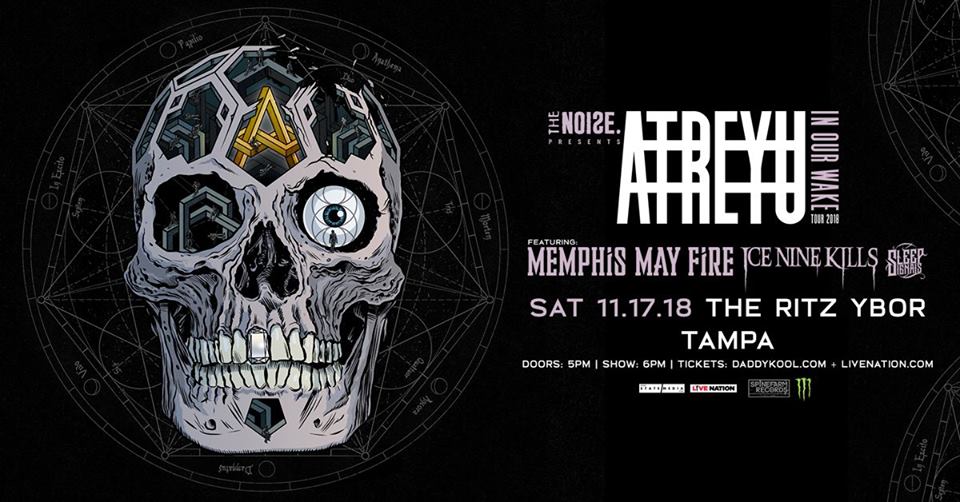 Tampa, Florida (November 17, 2018) – Sometimes when you find out a band you really like is coming to town, but there are three other bands on the bill, you try and figure out what time to get there so you can see your favorite act. When Atreyu announced their In Our Wake Tour, it was sure to be a great show with just them. But when they added Sleep Signals, Ice Nine Kills, and Memphis May Fire, this elevated it to a can’t miss concert that you need to show up when the doors open. So, it made perfect sense to see a large crowd wrapped around The Ritz in the Ybor City Section of Tampa FL on November 17th.
On a big card such as tonight’s, everything must go smoothly right from the get-go. Without missing a beat, the show started without delay and Sleep Signals hit the stage. Founded in 2014, this Minneapolis based quintet has toured non-stop throughout 2015, even playing huge festivals like SXSW and Northern Invasion. In 2017 they released their second effort At The End Of The World. While most of the crowd wasn’t familiar with them, they quickly won them over before their first song was done. All the non-stop touring they have done really shows. With a melodic yet heavy sound, they definitely made new fans tonight. The one cover song that they performed tonight was Seal’s “Kiss From A Rose”. While everyone was wondering if they could pull this one off, they did an amazing job with the song and had the crowd singing along with them. For sure this is a band to keep your eyes on.

After their time on stage was finished, the crews quickly and efficiently to change sets. The next act on stage was Ice Nine Kills. This Boston based band was formed in 2002 under the name Ice Nine. They later changed their name to Ice Nine Kills in 2006 just before they released their first effort. With five studio albums and three EP’s under their belt, along with countless tours including the main stage at the Warped Tour these guys know how to put on a show. In 2018 they released their latest effort The Silver Scream with each song being a tribute to a horror movie. With this being the case, each band member came out dressed as a movie horror character. Lead singer Spencer Charnas was Freddy Kreuger, lead guitarist Justin DeBlieck was Jason, bassist Justin Morrow was Jigsaw, guitarist Ricky Armelino wore a raincoat and had a balloon tied to his mike stand as It, and drummer Patrick Galante had blood spattered clothes as a victim. Appropriately, their set relied on their latest release to make the costumes relevant. The fans were eating this up and singing along to all the songs and loving the theatrics of the show.

After yet another speedy change over, it was time for Memphis May Fire to show the crowd their stuff. Formed in Nashville, TN in 2006, in the early years their line up changed a bit before settling in on lead guitarist Kellen McGregor, bassist Cory Elder, lead vocalist Matty Mullins, drummer Jake Garland, and touring member rhythm guitarist Samuel Penner. When they hit the stage, their heaviness hit the crowd like a shotgun. When they play, they mean business. The passion and energy that they bring to the stage is unreal. Singer Matty Mullins can switch his vocals between clean and melodic and a ruthless growl with the ease and speed of someone flipping a switch. After recording eight albums and two Ep’s, the professionalism and musicianship was outstanding. Easily these guys could be headlining their own tour.

Finally, it was time for the main act, Atreyu, to make the packed house happy. The group was founded back in 1998 in Orange county, CA. The band consists of Alex Varkatzas on vocals, Brandon Sellers the drummer and singer, guitarist Dan Jacobs, rhythm guitarist Travis Miguel, and Marc McKnight the bass player. As the crew’s setup the stage for Atreyu, you could see their drum kit on a tall riser with long curved steps on either side and a long riser at the front of the stage. When the band came out the crowd went nuts. You couldn’t even hear the first few chords of their song. Kicking off their set was “In Our Wake”, the title track from their latest release. There was no denying the guys were enjoying their time on stage. With the guys smiling and laughing on stage. Their joy only added to the show making it a sheer blast to watch as well as hear. At one point during the show lead singer Alex Varkatzas left off the stage and proceeded to run around the venue while singing the whole time. At one point he even walked all around one of the bars on the side of the stage. One really fun part of the show was when they broke into the Rick Astley song “Never Gonna Give Up On You”. It’s rare that you get to see a metal crowd singing along to an 80’s pop tune and enjoying themselves the whole time. They closed out the night with “Lip Gloss And Black” to a beyond thrilled crowd.
With four bands playing in one night, there is the chance that a show can drag. But with Sleep Signals, Ice Nine Kills, Memphis May Fire, and Atreyu together, the night flew by. Every band brought their best to the stage tonight and the crowd ate up every second of it. This was as perfect a night as you can get for a concert. If you are a fan of any of these great bands, make sure you get yourself a ticket to this amazing bill.