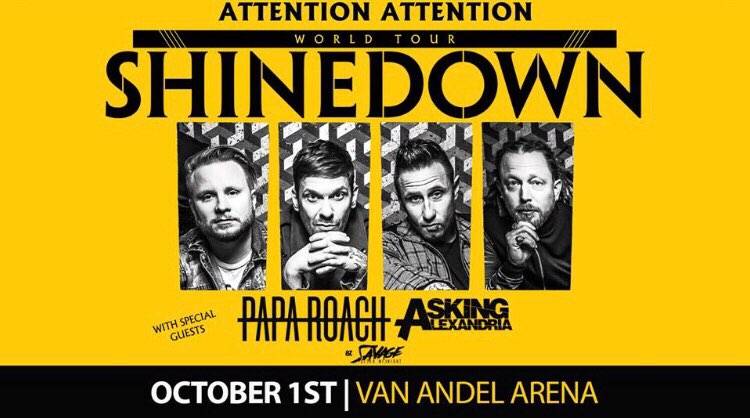 Grand Rapids, Michigan (October 1, 2019) – It was long but enjoyable wait for fans, but when the opening chords for “Devil” cut through the thick night air inside Van Andel Arena, the anxiety from the wait was instantly lifted for all the Shinedown loyals in attendance.

Long-recognized for their energetic and pyro-technically filled live shows, tonight’s endeavor was a ‘by-the-book’ performance.”  “Diamond Eyes (Boom-Lay Boom Lay Boom),” the second song in the set, started the pyrotechnic onslaught with large plumes of fire along with the appropriate sonic announcements that surrounded drummer Barry Kerch. The pyrotechnics continued throughout the set, often finding front-man Brent Smith perched on the drum riser along with Kerch, enveloped in the plumes himself.

Shinedown‘s set wasn’t all fluff and no substance by any stretch of the imagination. True fans know what to expect going in and Smith and the band delivered by the truckload. Radio favorites  “Monsters,” ”Attention Attention,” “45”and“Bully”mixed in with “Enemies”and “Call Me” got the show off to an incredible start! A great run for any artist but that was only the first stanza of the distinctive high intensity show!

The second, a semi-acoustic stanza highlighted the vocal abilities and range of the talented Brent Smith. Along with guitarist Zach Myers and cloaked in total darkness, the pair moved to the stage front and performed the mega-hit “Second Chance” followed by fan favorite, a cover of the Lynyrd Skynyrd‘s classic “Simple Man”. Illuminated by a single white spot-light both moved about on stage while waving and leading the chorus on the sing-a-long crowd favorite.

With the full band retaking the stage to start the final run to the finish, Shinedown came out armed with some of the strongest music in their repertoire. The band now fully re-energized after a short break off stage, blistered off 3 burners back to back to back. “Cut the Cord” lead the assault with “Get Up”and the ever-popular “Sound of Madness”supporting the back end.

The immensely entertaining night ended on the Attention Attention World Tour stop in West Michigan and Shinedown’s set with the appropriate and often overlooked “Brilliant,” the last cut off the tour namesake and most recent release “Attention, Attention”.  It was the perfect choice to end one of the more memorable nights of music in the Micro-Brew Capital of the World! 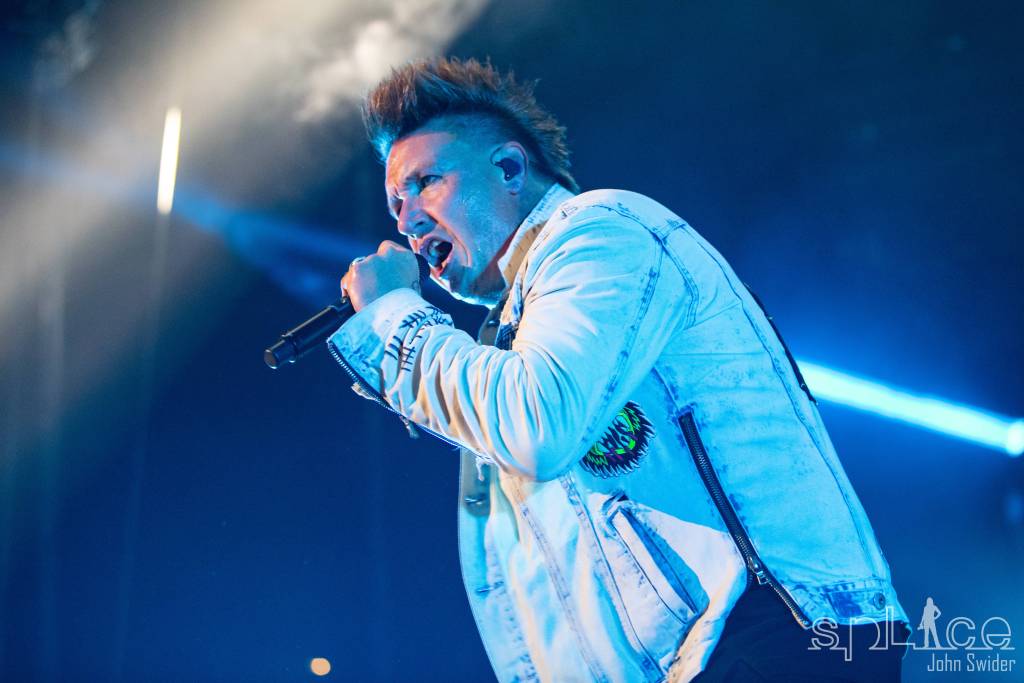 It is not too often that you get the chance as a fan to see a proven headliner on a tour for support. When you do and the band is still as relevant today as anytime in their 26-year existence, it’s an added bonus. This scenario played out recently as Papa Roach along with the nights headliner Shinedown, made their highly anticipated tour stop at the Van Andel Arena in Grand Rapids, Michigan.

Having long ago shed the nu-metal label, Papa Roach’s latest release, 2019’s Who Do You Trust, is proof the band continues to evolve along with its fan base. Gone are the days of late-teens and early twenty-somethings filling the seats, now replaced with a diverse age group of fans who universally are drawn to Papa Roach’s broadened style and sound. Opening the night off with the title track, “Who Do You Trust,” cements the notion that this band “gets it” and has matured as others have faded into obscurity.

The 1-hour,10 minute set, was short on time but loaded with substance and energy. New songs fit seamlessly, side by side, with Papa Roach’s older selections as the 13 song setlist meandered intently through different eras of the bands releases. To just list songs in order of performance would, in effect, obscure the emotional rush that was evident throughout the set. “Elevate” found Jacoby Shaddix jumping off stage and wandering throughout the crowd while the higher energy  cuts “Getting Away With Murder” and “Between Angels and Insects” had security scrambling with non-stop crowd-surfing over the barriers. But just as quickly as the fans took flight overhead, they where quickly brought down to earth with the timely “None of the Above” or “Scars,” which gave the fans and security both, a quick breather. 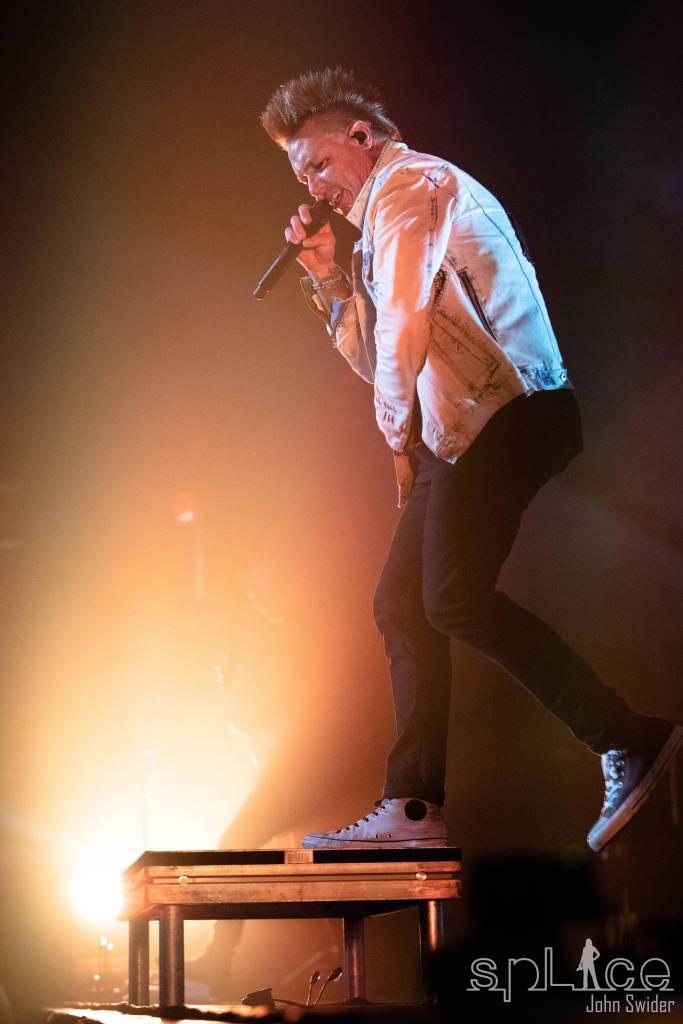 Listening to Jacoby Shaddix deliver the searing vocals during the set, the evolution is readily apparent both musically and lyrically. His pitch control and vibrato are strong and unwavering during long stretches, where earlier in his career he would have broken pitch. Jerry Horton’s (guitar) continues to lay down the scintillating licks while Tony Palermo handles the rhythms and beats the band follows. We would be remiss if we didn’t mention the multi talented Anthony Esperance who handles everything from rhythm guitar to keys with a little percussion thrown in for good measure. These guys were tight and appeared to be having a lot of fun on stage which was readily visible by the interactions amongst one another.

Papa Roach closed out their set with the appropriate send-off “Last Resort” much to the dismay of the standing and singing crowd who were thoroughly enjoying the moment. The fans wanted more and the band wanted to oblige, but a tight timeline would not permit it. Unfortunately, the abbreviated set means some fan favorites became casualties, and that was the case tonight with “American Dream.”

There is something special about a Papa Roach show that can’t be explained but only experienced. They have an uncanny ability to radiate their passion and energy to each and every fan, every second on stage.Tonight was fully indicative of what fans experience each night when they take their seat for a Papa Roach show. It doesn’t hurt matters either that thier music catalog is packed full of the hits and subsequent rock anthems that fans have come to love and expect each time Papa Roach dons the spotlight.

Do yourself some justice and make it a point to see Papa Roach live, you will thanks us later!