Three Days Grace and From Ashes To New

Tickets On Sale This Friday January 27th at 10am Local 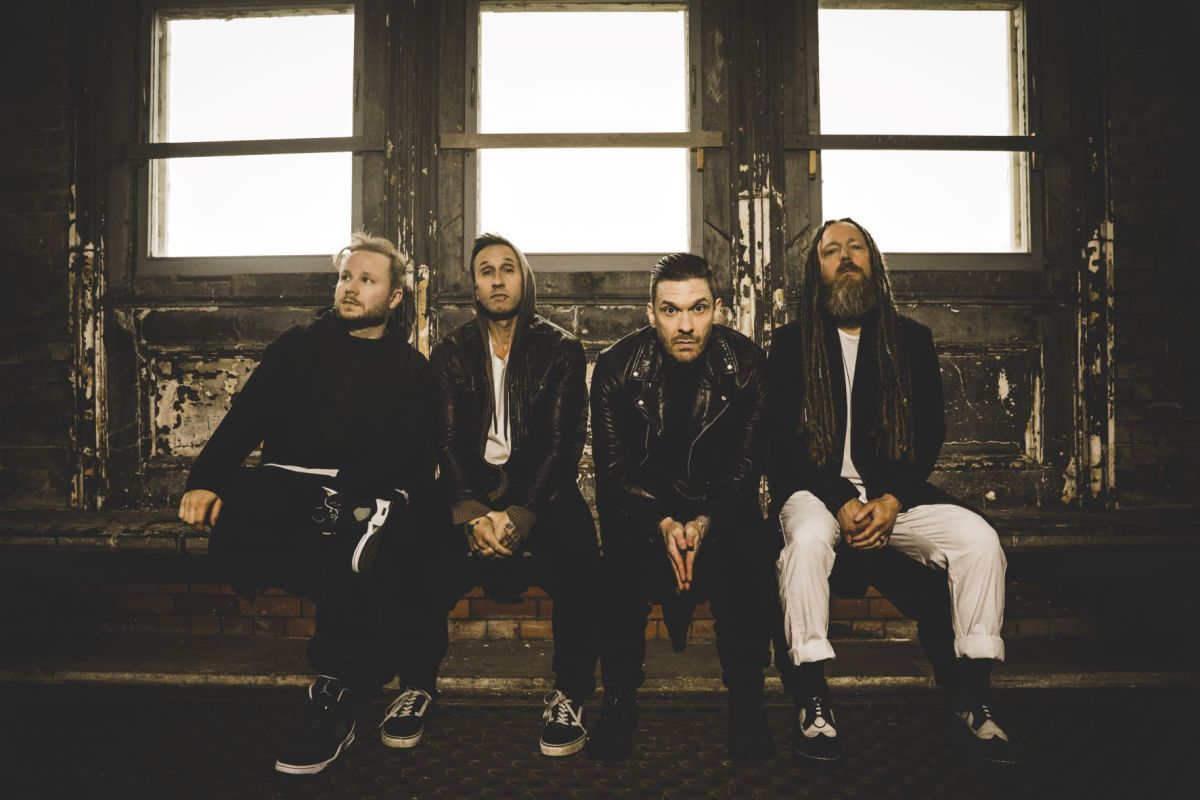 “Superstars Shinedown continue their creative evolution…Taken as a whole, Planet Zero continues Shinedown’s good work but widenstheir stride. Most of these songs could stand alone, but together they’re the work of a band unafraid of veering from one side of life’sroad to another, and of rock stars totally in tune with the people who put them there.” – KERRANG!

“’Daylight’ is the most powerful of pop–rock songs created to remind us that we are truly all in this together.” – PEOPLE

“… intelligent, uncompromising rock… a fiery epic that’s delivered as sci–fi but is actually a trenchant dissection of the surreal andfractured state of our very own world.” – American Songwriter

“We’re lucky to have Planet Zero as a warning flare. The album is Shinedown’s most strident statement yet. From cancel culture toTwitter addiction to divisive politics, Shinedown take shots at the forces that undermine our shared humanity.” – GRAMMY.com

“…a high–concept treatise on societal affairs during the past 22 months, including the travails of living through a pandemic, the pitfallsof social media, mental health issues, political divisiveness, partisan media and cancel culture.” – Billboard

The Revolutions Live Tour starts off in Saginaw, Michigan on April 3, kicking off a 21–date U.S. run ofspring shows that will see the record–breaking band bring their hit album Planet Zero to life live from coastto coast. Public on–sale begins this Friday January 27 at 10am local at LiveNation.com. Variouspresales will be available Tuesday, January 24 through Thursday, January 26. Full tour routingbelow. For all show/ticketing details please visit www.shinedown.com. The band will also play the Blue RidgeRock Festival at The Virginia International Raceway in Alton, VA this September.

This tour announcement follows last week’s release of the new music video for current rocksingle “Dead Don’t Die,” a rousing declaration of survival and an anthem about the resilience of the humanspirit after trying times, written by guitarist Zach Myers about front man Brent Smith. The cinematic video,filmed in London, was directed by Lewis Cater. PRESS HERE to watch.

The Planet Zero album debuted in the Top 5 on the Billboard 200 Chart and the Official UKAlbums Chart, and at #1 on six other Billboard charts including Top Album Sales, Rock, HardRock, and Alternative Albums Charts. Featuring searing and incisive tracks like “Dead Don’t Die” and#1 rock hit “Planet Zero”, as well as uplifting and unifying songs like the soaring pop–rock anthem and#1 rock hit “Daylight” and “A Symptom Of Being Human,” Planet Zero boldly confronts thesocietal forces that perpetuate divisiveness while offering a restorative path forward throughempathy and open conversation – ultimately serving as a reminder that it is our humanconnections that matter the most. The band’s video for “Daylight,” set to the Amazon Originalversion of the song, is a love letter to their fans and shows the impact that the song’s message – that you arenever alone – had during Shinedown’s sold–out Planet Zero World Tour. PRESS HERE to watch.

Additionally, Shinedown recently received an iHeartRadio Music Awards nomination for RockArtist of the Year as well as for Rock Song of the Year for “Planet Zero.” 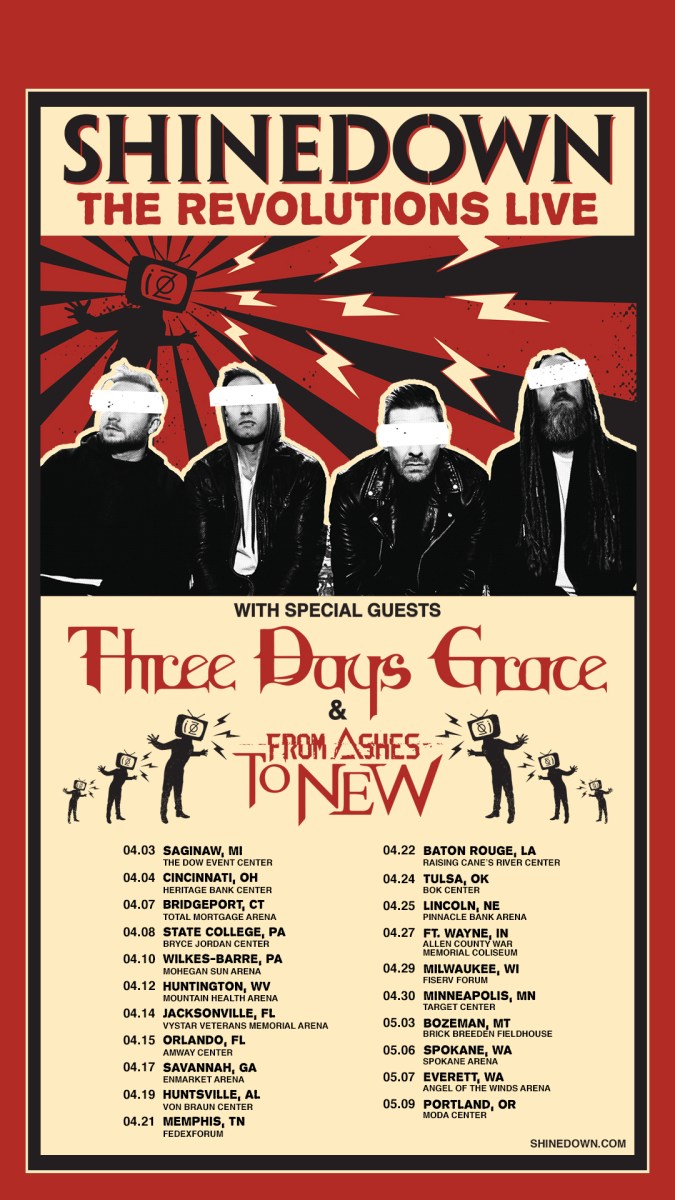 ABOUT SHINEDOWNMulti–platinum band Shinedown – Brent Smith [vocals], Zach Myers [guitar], Eric Bass [bass,production], and Barry Kerch [drums] – have cemented their status as one of the most vital and forward–thinking powerhouses in modern rock, embodying the kind of creative dynamism, constant evolution, singularvision, and an uncompromising honesty that transcends boundaries. The record–breaking band, known fortheir timely messages behind their chart–topping songs that resonate with not only their globalaudience and the rock community, but our culture at large, has achieved astronomical success withover 6.5 billion global streams, 19 #1 rock hits, 15 platinum and gold singles, platinum or goldcertification for every album, and 10 million albums sold worldwide. Shinedown have alsobecome an essential cultural force as evidenced by their major media acclaim and participation in theprestigious 92Y Talks series. The band is currently named #1 on Billboard’s Greatest Of All TimeMainstream Rock Artists Chart, after notching the most ever #1s (18) in the 40–year history of theMainstream Rock Songs Chart with a string of consecutive #1 hit singles including “Daylight,”“Planet Zero“ “Atlas Falls,” “GET UP,” ATTENTION ATTENTION,” “MONSTERS,” and“DEVIL”, and landed each of their 29 singles in the Top 10 on Billboard’s Mainstream RockChart, tied with Foo Fighters for most out of any artist in history.
2018’s acclaimed album ATTENTION ATTENTION, a story album that confronts such complex matters asmental health and the resolve of the human spirit, was certified RIAA Gold and debuted in the Top 5 on theBillboard 200, simultaneously hit #1 on Billboard’s Alternative, Top Rock and Hard Rock AlbumsCharts and led to five iHeart Radio Music Award nominations. Its accompanying 2021 feature film,directed by Bill Yukich (Beyoncé, Metallica), is a riveting visual counterpart to the album’s narrative, weavingits 14 songs into a provocative and thought–provoking cinematic journey that illuminates yet anotherdimension of their limitless creativity.
Hailed for their high–octane live shows, explosive rock ‘n’ roll spirit, thought–provoking lyrics, and melodicsensibility, Shinedown continues to engender diehard love from millions of global fans and has racked upcountless sold–out arena tours and festival headlining sets propelled by the undeniable power of front manBrent Smith’s voice.
ABOUT THREE DAYS GRACESince 2003, Three Days Grace has staked a spot amongst the hard rock vanguard, breaking records, topplingcharts, moving millions of units worldwide In 2015, Human marked the group’s second straight #1 slot on theBillboard Top Hard Rock Albums Chart as well as their fourth consecutive debut in Top 20 of the Top 200. Itspawned two #1 singles “Painkiller” and “I Am Machine,” signaling their 13th overall and 5thconsecutive numberones on the U.S. Active Rock Radio chart. Moreover, the four–piece consistently averaged a staggering 3.9million monthly listeners on Spotify—remaining one of the most listened to rock bands in the world. In 2012,Transit of Venus soared to the Top 5 of the Top 200 and garnered a nod for “Best Rock Album of the Year” atthe Juno Awards. The seminal One–X [2006] notched an RIAA triple–platinum certification as Three DaysGrace [2003] was minted platinum and Life Starts Now went gold. To date, their veritable arsenal of numberone includes “Chalk Outline,” “The High Road,” “Misery Loves My Company,” “World So Cold,” “Good Life,”“Break,” “Never Too Late,” “Animal I Have Become,” “Pain,” “Just Like You,” and “Home.”
ABOUT LIVE NATION ENTERTAINMENTLive Nation Entertainment (NYSE: LYV) is the world’s leading live entertainment company comprised of globalmarket leaders: Ticketmaster, Live Nation Concerts, and Live Nation Sponsorship. For additional information,visit www.livenationentertainment.com.
ABOUT FPC LIVEFPC Live, a promoter division of Frank Productions, is a full–service concert promotion company involved inevery facet of event management. FPC Live produces and promotes entertainment events across the countryand manages eight owned–and–operated venues. For additional information, visit FPC–Live.com.
FOLLOW SHINEDOWNFacebook | Instagram | TikTok | Twitter | Website | Atlantic Records