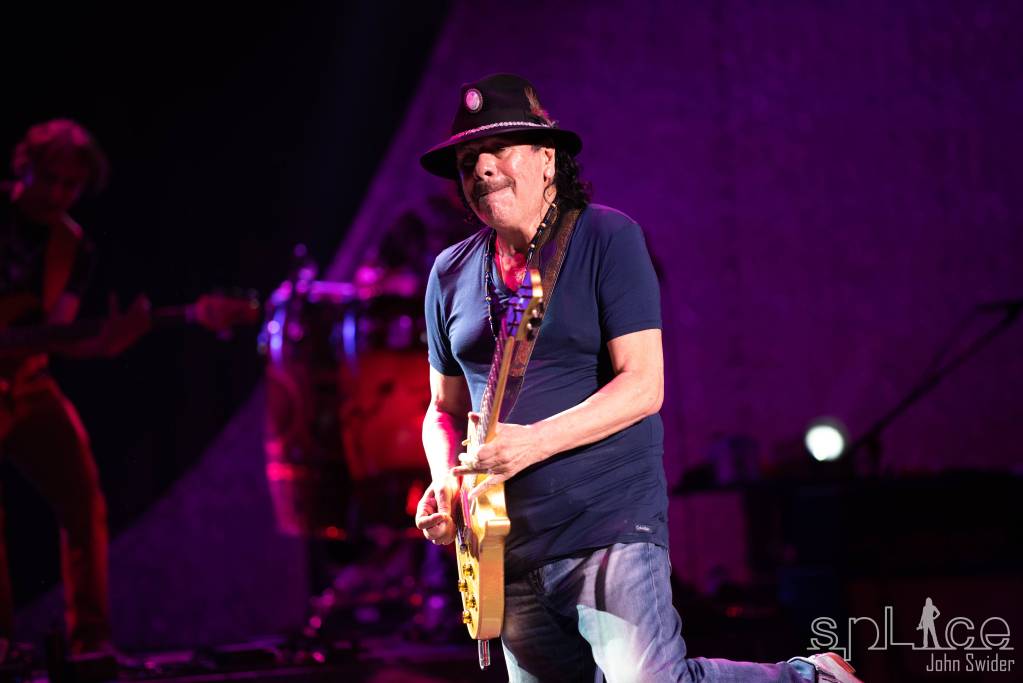 Clarkston, Michigan (August 11, 2019) – Carlos Santana, the ageless guitar Icon and his band Santana had a celebration of sorts Sunday night at the DTE Energy Music Theatre. The group known for their hybrid mix of rock, Latin and jazz were in town commemorating the Golden anniversary of their appearance at Woodstock, as well as the 20 year anniversary of the release of the genre defining Supernatural album.

Santana, appropriately dressed in his trademark hat, jeans and t-shirt never did mention either of the music landmarks by name, but subtle reminders throughout the two-hour set lead you to believe this was much more than a normal summer tour this time around. If the aptly named tour “Supernatural Now” wasn’t a big enough clue, the five songs from Supernatural  should have got the gears churning. Cuts off the 30-million selling classic included the hits “Smooth,” “Maria Maria” and “Put Your Lights On,” as well as a blistering version of “(Da Le) Yaleo,” which was preceeded by a video introduction by the late Bill Graham, Santana’s onetime manager, and the funky rhythmic “Corazon Espinado.”

The early part of the show featured the Santana classics “Evil Ways” (paired with John Coltrane’s “A Love Supreme), “Black Magic Woman” and “Oye como va,” which allowed Santana to stretch his legs and delivery one searing solo after another. If this wasn’t a direct correlation back to his Woodstock performance, the rear-stage video that displayed clips from the 1970 film “Woodstock” that ushered in an explosive “Soul Sacrifice” did the trick.

One of the more memorable moments of the night had nothing to do with either Woodstock or the Supernatural anniversary. Santana brought out special guests the Doobie Brothers for a 17 musician musical romp through Bob Marleys “Exodus,” with a few bars of “Get Up,Stand Up” tossed in for good measure. Santana being the ultimate jam master himself, playful tossed guitar solos to the Doobies like a ringmaster at a circus. The result was a lengthy jam session that had everyone in the venue playing their own air guitars without a care in the world. Santana also paid tribute to the late Aretha Franklin in her home town as the first anniversary of her death approaches. Before “Black Magic Woman” he shouted out that, “Our queen that ascended into another dimension. She’s still here with us today. She just changed her zip code.” With a deafening roar of love and appreciation for Santana and the Queen of Soul, it was reminiscent of Woodstock only 50 years later and a few hundred thousand less fans.

Carlos Santana is a cultural and music Icon forever tied to his performance at Woodstock. Good or bad, the 71 year old guitar master continues to  perform with the energy and the vigor of musicians that could be his grand children’s age. He is a throwback to a time when peace, love and music was a way of life and not just a pipe dream of a nation. Carlos Santana is a blessing to a generation full of fans and should be heralded as such. Happy Anniversary Carlos Santana, may peace, joy and happiness bless you along your lifelong musical journey.