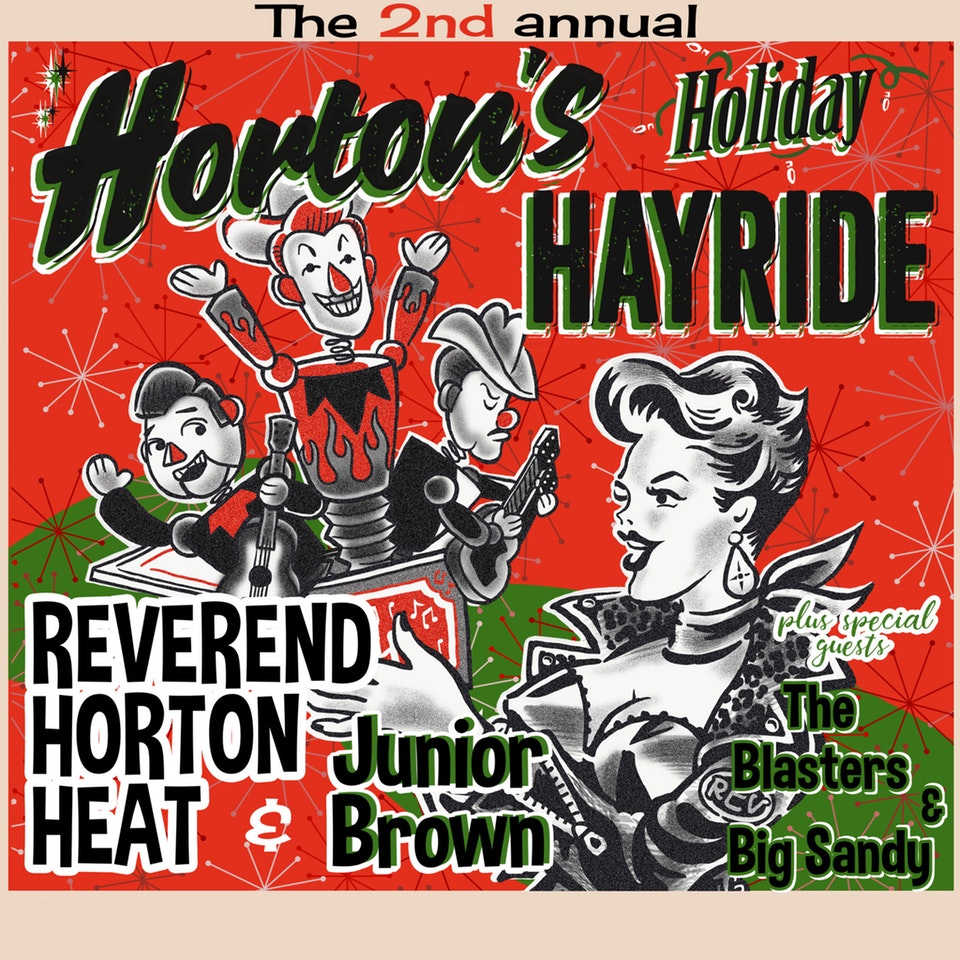 Beachland Ballroom, Cleveland, OH (12/01/18) – The 2nd Annual Horton’s Holiday Hayride with Reverend Horton Heat rolled into the Beachland Ballroom in Cleveland. The historic and artsy ballroom was a perfect place to host such an awesome lineup. The Holiday Hayride featured The Blasters, Junior Brown, Big Sandy (performing a handful of songs with RHH), and of course Reverend Horton Heat.

As the crowd assembled, the venue was filling up quickly and appeared to be a near sell-out. The beer and drinks were flowing and it did not take long for the first act to hit the stage. With a stage lit in blues, reds, and amber The Blasters were first up, and ready to entertain.

Firing things up with Long White Cadillac, this foursome had the crowd’s attention from their first note. Vocalist-guitarist Phil Alvin, drummer Bill Bateman, bassist John Bazz, and guitarist Keith Wyatt had their Americana Rockabilly sound dialed in. Blasting out an outstanding cover of the Merle Haggard classic The Only Hell My Mama Ever Raised really got the crowd warmed up. With a great following, many in attendance were very familiar with their songs, and the highlights Dark Knight and So Long Baby Goodbye were followed by the loudest applause of the set.

With Phil, Bill, and John being founding members back in 1979, they still sound top-notch today. Like most of us in attendance, age was only on the exterior, and The Blasters weaved a sonic blanket of sound for nearly an hour. It’s great to see pioneers of a genre still at it today, out here on the road playing their music live for the fans to enjoy. What a phenomenal start to tonight’s show and it set the bar high right off the rip. Be sure to check out The Blasters next time they’re in your neighborhood.

With a storied career and double-digit album releases Junior Brown has plenty of fan-favorite songs. Performing tracks like My Wife Thinks You’re Dead, Too Many Nights in a Roadhouse, and Long Walk Back to San Antone, the first part of his set was filled with familiar songs. Junior stating, “You Having a Good Time? Good, that gives me a minute to adjust my amp.” A quick adjustment to his on-stage amplifier and he busted out a stellar version of Yakety Sax that led into Free Born Man – which chugged along like a freight train. Slowing things down for a few songs he continued with a couple more before performing a blistering Albert King cover with Blues Power. Up next was The Better Half which led into a brand new song about Waiting On A Handyman featuring Tanya Rae Brown on vocals.

Highway Patrol got the crowd singing along as expected. He broke out more of his guitar prowess with Surf Medley. After performing for well over an hour, Junior Brown turned off his amp, unplugged his guitar, waved to the crowd as they cheered, and the band played Junior off. With an incredible set by this honkey tonk guitar master, the night was now set up for the headliner to take the stage.

With the stage conversion complete, Jim “Reverend Horton” Heath (Vocals and Guitars), Jimbo Wallace (Standup Bass), Arjuna “RJ” Contreras (Drums), and Matt Jordan (Piano) took the stage. The recent addition of Matt made for an interesting take on some of the classic songs. Adding in live piano did not change the songs much, but rather enhanced them, adding in a piano solo once in a while.

Horton’s Holiday Hayride got festive right off the starting line with We Three Kings, the title track from Reverend Horton Heat’s Christmas album. It did not take long to get the party in full swing as they segued into Baddest of the Bad. With a mixture of older hits, newer tunes, and Christmas songs, the first part of the set was a high-powered, festive rumble at the Beachland. Ripping through song-after-song it was not long until they were eleven songs into their set and it was now time for special guest Big Sandy.

Big Sandy was flying solo tonight, well let’s say he was not accompanied with his Fly-Rite Boys. He was, however, a welcomed addition to the Reverend Horton Heat set. With his high strapped guitar and a smile on his face, he was ready to share some true, pure rockabilly. Havana Moon was a spectacular and beautiful song that not only showcased his vocals but also showcased the talent of his all-star backup group tonight. After a seven-song performance that included one broken watch (that he tossed into the crowd), Big Sandy left the stage to a bellow of cheers.

The Rev got things fired back up with the title track from his latest release Whole New Life. Released on November 30th the album had just been released one day prior to this show. The new songs were well received, and when mixed into the existing concert standards for the Reverend Horton Heat they flowed perfectly.

The biggest difference tonight was the vibe. Sure, it was a holiday-themed concert. Sure, the Rev had recorded a Christmas music album with We Three Kings. Did one ever think they’d hear their live version of Rudolph the Red-Nosed Reindeer following Psychobilly Freakout? Well, not unless you are lucky enough to have caught them on their 2nd Annual tip of the cap to the holidays.

The two-hour-plus set tonight included 29 tracks. Twenty-Nine… albeit eight of those were with Big Sandy, but all of those featured the full Reverend Horton Heat band. With some of the hardest hitting songs, to some of the most beautiful instrumentation they have ever performed, it was a real intimate evening for the fans packed into the Beachland Ballroom. A few stories were told in between some of the songs, but tonight was all about music. The Rev even took some time to explain how much The Blasters and Junior Brown had an impact on him as a musician, and how that was a driving reason behind the lineup that was on stage tonight.

After over four hours of music poured from the ballroom stage tonight… the 2nd Annual Horton’s Holiday Hayride was complete. An incredible night of music from beginning to end, with this stellar lineup.

You still have time to catch them on tour. Check for dates in your area here!