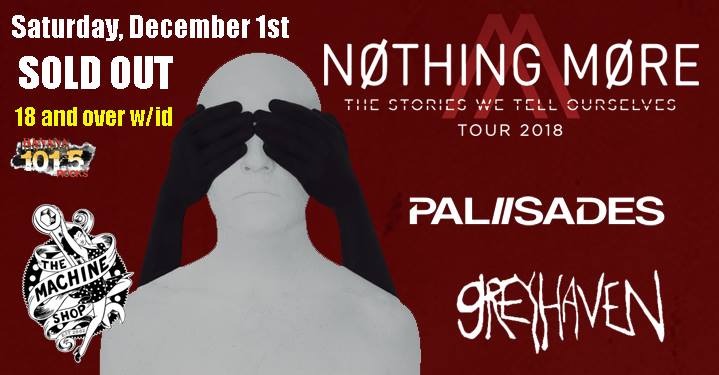 Flint, Michigan (December 1, 2018) –  What better way could there be to spend a Saturday night than at a sold-out Nothing More The Stories We Tell Ourselves Tour stop at the Machine Shop? The answer to that is just about nothing! With special guests, Greyhaven and Palisades – tonight was sure to be one for the books!

The first band of the night was Greyhaven, from Louisville, KY. Although their music was a bit heavier than Nothing More, they did a great job of kicking the show off and the crowd loved them!

Second on the bill was Palisades. The New Jersey based band, founded in 2010, consists of Louis Miceli (vocals), Matt Marshall (guitar), Xavier Adames (guitar), Brandon Elgar (bass/vocals), and Aaron Rosa (drums). Again, another great band to get the crowd hyped for Nothing More. I’m definitely looking forward to their new album, Erase The Pain, releasing on December 28, 2018.

Finally it was time for Nothing More to hit the stage. They are one of the most fun bands to watch; so being able to see them at an amazing, smaller venue like the Machine Shop was awesome! The one thing that I was wondering though, was if they would be able to get their 400-pound, 14-foot tall animated structure called the “Scorpion Tail” on stage. The “Scorpion Tail” was built by bassist Daniel Oliver from scrap metal and salvaged auto and motorcycle parts and is one of the coolest things any band has as part of their set!

They opened the set with “Do You Really Want It?“, and the crowd went nuts!!! Their energy of the live show is off the charts and easily makes them one of the best live bands. From having a spinning contraption that had a bass guitar on it and drumstick used to play it, to vocalist Jonny Hawkins riding the Scorpion Tail and being half in the rafters, it was easy to see why the show had sold-out in about a half hour after going on sale! They ended their set with “Salem (Burn the Witch)” which included some drum solos, and not doing an encore, saying there is no use in faking people out just to come back and play a couple more songs.

This show was by far one of my favorites of the year being that it was one of my favorite bands at one of my favorite venues. All three bands are totally worth checking out if you haven’t already. Again, I couldn’t think of a better way to spend a Saturday night, and definitely try to catch Nothing More when you can, you won’t regret it!