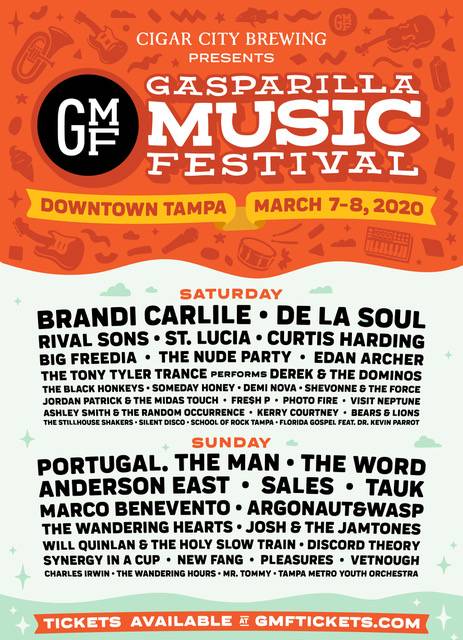 Tampa, Florida (March 7th + 8th 2020)-As the rest of the United States is beginning to think about thawing out, all the folks in the know in beautiful Tampa, Florida are gearing up for a music festival, Gasparilla Music Festival that is. For nine years now, beautiful Curtis Hixon Park has been home to this truly one of a kind, two day event. While most music festivals focus on one genre, Gasparilla Music Festival plays host to one of the most diverse and eclectic lineups out there.

Nestled in downtown Tampa, the festivals current home, Curtis Hixon Park, is located right next to the Tampa Museum of Art on the scenic Riverwalk, adjacent to the Hillsborough River. With plenty of parking and easy access to major roads, the organizers have done a great job in choosing this location and continue coming back to it year after year. It goes without saying that March 7th-8th, the dates of this year’s festival, traditionally has some of the best weather in the world; sunny with low humidity and temperatures in the 70’s. This year though mother nature tossed everyone a curve ball and cooled things off into the 50’s when the sun went down. So, jacket weather it was. 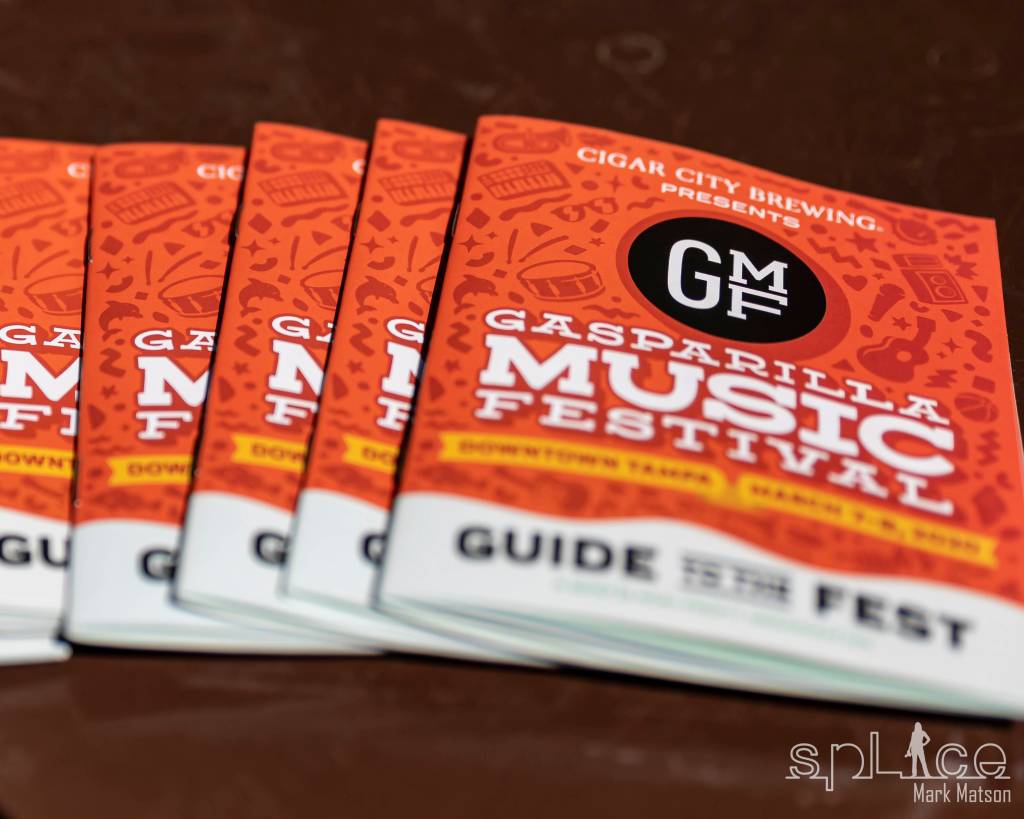 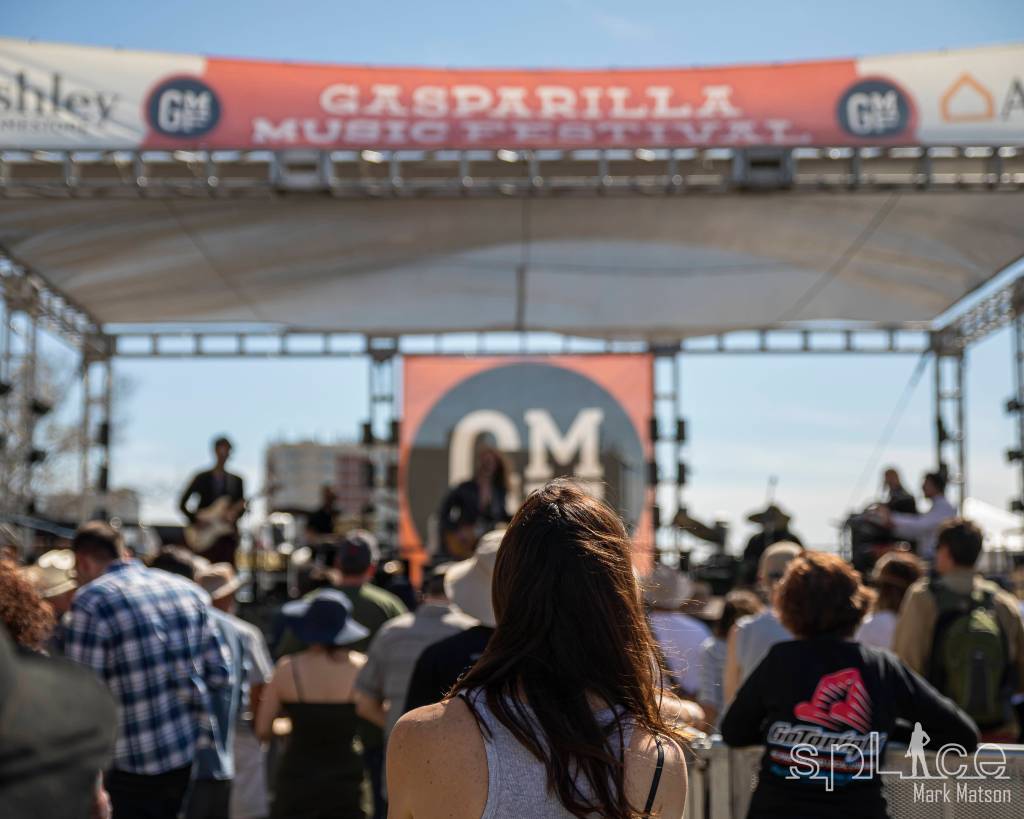 One of the great aspects of Gasparilla Music Festival is it’s a family friendly atmosphere. If you can’t get someone to watch your kids, bring them along! Even better, if you were under 12, attending didn’t cost a thing!  Sure, a music festival is all about the music, but there was music and activities just for the kids. From face painting to instruments designed to pique the interest in budding musicians, there were activities to keep the little ones happy and engaged. 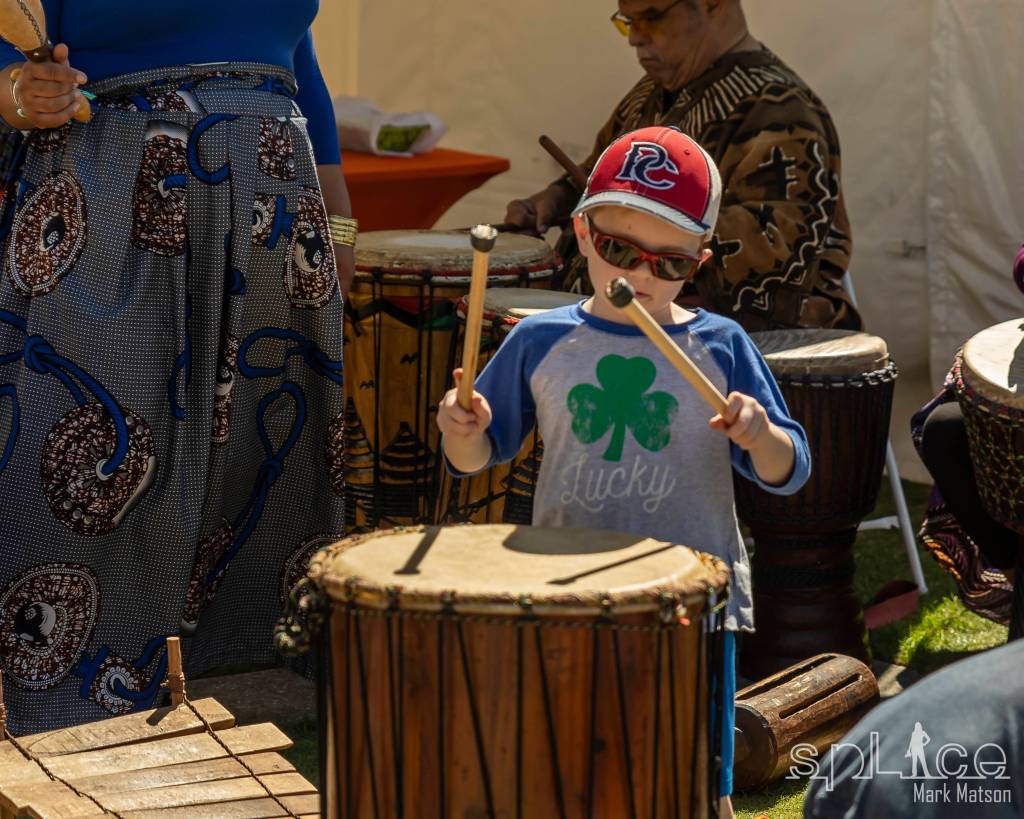 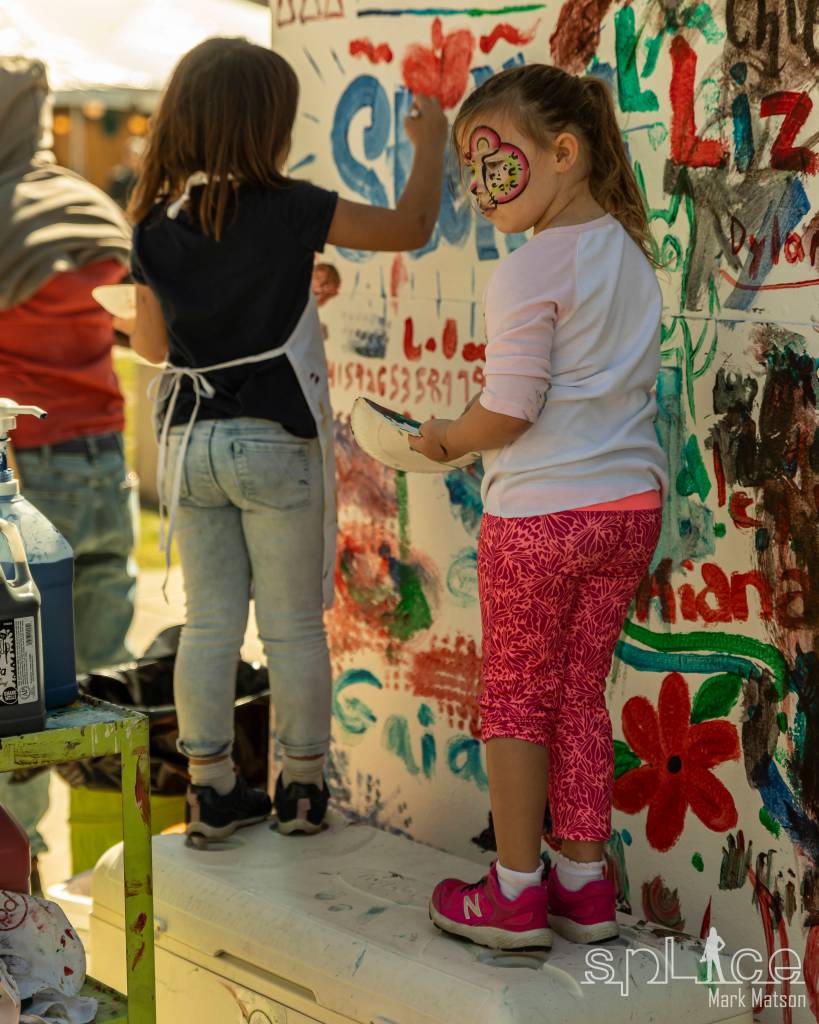 The hallmark of Gasparilla Music Festival is the diverse musical talent that they manage to bring in every year. There has not been one dominant genre that the event has featured in years past that would classify its existence. In fact, virtually every kind of music imaginable has graced the stages at this festival at one time or another. This year was no different, with Country/Americana/Folk Singer Brandi Carlisle and Alternative rockers Portugal The Man each chosen as the headliners for Saturday and Sunday. With four stages, music is going non-stop, and with all the variety you will find some great new bands to add to your playlists. 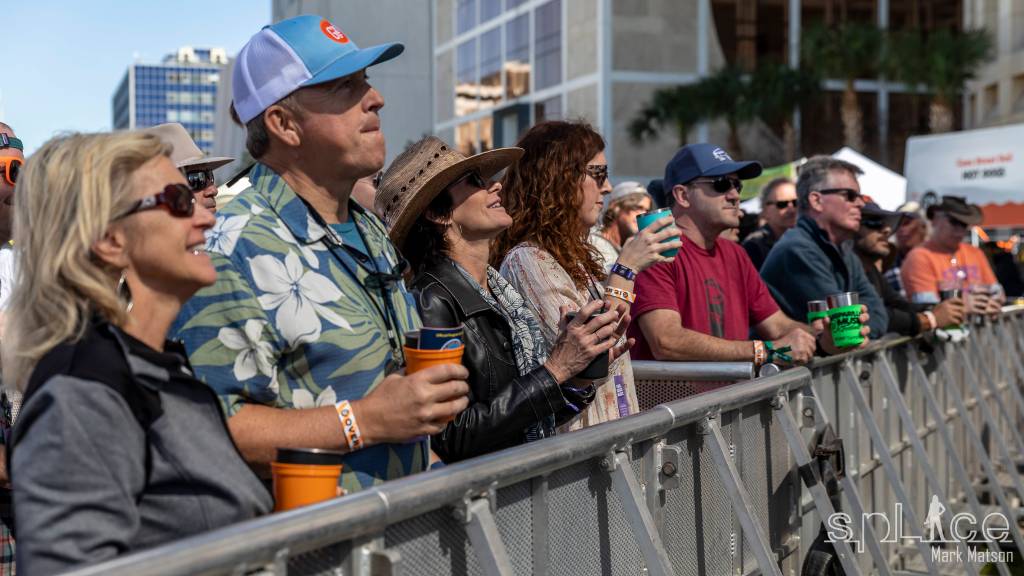 With the sun fully up and the morning chill burned off, the crowd hit Curtis Hixon Park early to stake out the good spots at all the stages. With none of the usual mid 80’s temperature that Florida gets, the cool weather brought people out extra early this year. By 2:30 on Saturday when The Tony Tyler Trance hit the Ashley Homestore Stage the crowd had packed in to hear them jam out on with their tribute to Derek & The Dominoes. The entertaining performance featured Tony Tyler channeling his best Duane Allman with a slide on his Les Paul while fellow bandmate Michael Nivins took his turn as Eric Clapton on his Fender Stratocaster. Over the next hour and a half, they recreated the magic that Derek & The Dominos brought to the world some fifty years ago. With the crowd pushed all the way back to beer garden area, there was hardly any room to catch them burn up the stage. Even the VIP area was packed with people rocking out.

If you were looking for a change up from the 70’s infused rock of The Tony Tyler Trance, then it was time to hop over to the Water Street Tampa Stage and catch Curtis Harding. With a self-described genre of “slop ‘n’ soul”, which comes from the slop part being the mix of rock, blues, gospel and R&B and the soul representing his youth. With his silky smooth voice and eclectic style, he wowed the crowed that packed into the field at the main stage. One of the great aspects of Gasparilla is that it gives local acts a chance to rub elbows with the many national bands in attendance. Tampa Bay native Ashley Smith & The Random Occurrence was one such local band that got to share their alt/rock style with all the festival goers. While they may not be known outside of the area, they certainly packed the Ferman Amphitheater. There wasn’t a empty seat and the aisles were full of people catching their fun filled set.

Another great aspect of Gasparilla Music Festival is discovering cool new bands. The Nude Party is definitely one of those up and coming bands that once you see, you become a fan. Hailing from Boone, North Carolina, they got their name from actually performing in the buff during their formative years at college frat parties. This is no ordinary college alt/rock band by any reach of the imagination though. With a lap steel guitar and keyboards alongside the requisite guitars, bass and drums their sound was one part blues, one part rock, and the rest a whole lot of fun. From the get-go, they had the crowd in the palm of their hands with their infectious sound. Another eye opener was Big Freedia. Labeled the “Queen of Bounce”, this New Orleans export had the crowd going wild with a huge bass thumping beat and three back up dancers that redefined booty shaking.

After a full day of killer music by tons of great bands across four separate stages, the sun was starting to set and the temperature was dropping. But things were going to get hot once again as the Grammy Award nominated act Rival Sons were about to take the main stage. They kicked off their set with “End Of Forever”, off their latest release Feral Roots. Ironically, prior to taking the stage, you could hear some people whispering that they weren’t familiar with this hard driving rock act. But after just a few seconds into their high energy set, you could see those same people getting blown away by their performance. With the hour and a quarter they were allotted, they made the most of every second of it. Playing a mix from four of their releases, they managed to wow the crowd with every song  played. The only time that lead singer Jay Buchanan talked with the crowd, he spoke about forgiveness and how the next song was about two people he knew. That being said, Rival Sons broke into breathtakingly beautiful performance of their hit song “Where I’ve Been”. When their show was over, all you could hear was people talking about how powerful and intense their set was. Clearly this was THE performance of the whole festival.

As Rival Sons was finishing their set, the crowd was in a full-on dash back to the Ashley Homestore Stage to catch rap icons De La Soul. This new York based trio were trailblazers in the rap world with their fusion of jazz and their eclectic sampling. With Posdnous taking the stage and hoping on speakers to get to the crowd, he brought tons of energy to the stage and to the crowd. Unfortunately, They were down a member as one was Trugoy was ill. Filling in for him was Talib Kweli. With everyone taking turns behind the turntable and out in front of the crowd it kept the action and fun going. As they were finishing up their set, they told the crowd “Get your asses over to the main stage for the head showgirl of the night!” in reference to the headliner Brandi Carlisle.

Finally, it was time for the last act of day one to take the main stage, multiple Grammy Award winning singer and song writer, Brandi Carlisle. As she hit the stage with her long time bandmates Tim and Phil Hanseroth flanking her sides, she entertained the crowd with her earnest performance and at times boot stomping good fun. With a full moon creating another spotlight on the cloudless night, the beam of light helped  create a beautiful atmosphere for her to showcase her many hit songs. Carlisle performed a wide range of songs like “The Story” and “The Joke”, all the way to a cover of the Elton John classic hit, “Madman Across the Water”. She also tipped her hat to a major influence of hers Joni Mitchell, letting the crowd know she had been jamming to her music while in the studio and even playing her music as well. Of course, with an admission like that she had to play one of Mitchell’s songs, “A Case Of You”.

As the show ended the well satisfied crowd calmly filed out of Curtis Hixon Park and made their way home knowing that the next day, they would be entranced with more music from an equally diverse lineup. With Portugal The Man, The Word and Anderson East on tap as well as a full plate of local and national talent, everyone would need a goodnights sleep to recover from a perfect day of music. What a job the organizers have done with this year’s Gasparilla Music festival. As they manage to do every year, they have again put together one of the most diverse festivals out there. From top tier Grammy Award winning artists to up and coming buzz worthy acts to the best local talent from every genre out there, there is something out here for everyone. Now the question is what can they do to top this years homerun. We will all just have to patiently wait 365 days and snatch up tickets when they go on sale.