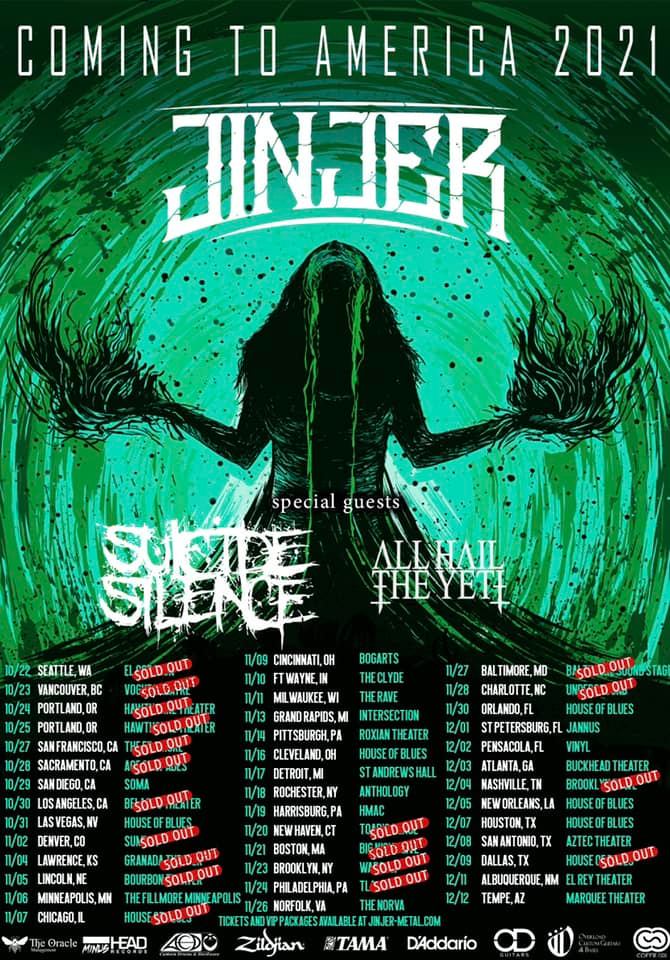 It’s a crisp Tuesday evening in Disney Springs, the area in Walt Disney World known for shopping, dining, and of course entertainment. This also happens to be the Home of the venerable House Of Blues Orlando location. Instead of a sea of people calling it a day, folks are descending on the House Of Blues for a mid-weeknight of heavy metal served up by none other than the Ukrainian powerhouse Jinjer. Supporting them on this tour is All Hail The Yeti, and Suicide Silence. Unfortunately for fans of Suicide Violence their name ran afoul of Disney’s family friendly image, and they were not allowed to play at this stop of the tour.

While the crowd was understandably disappointed that one of the bands wouldn’t be playing tonight, they were still getting a ton of great music courtesy of the Jinjer and All Hail The Yeti. For those uninitiated with opener All Hail The Yeti you would have no clue with what they would unleash on everyone in the venue based on the stage setup of vines, lights, and animal skulls. As the band made their way onto the stage you couldn’t help but notice the striking face paint they were wearing. Once they launched into their set, this four-person group made up of vocalist Conner Garrity, bassist Nicholas Diltz, guitarist Dave Vanderlinde and drummer Ryan Kittlitz absolutely nailed their part of the show. Their brand of groove filled heaviness is a perfect fir for this tour and judging by all the head banging going on in the crowd everyone really enjoyed their performance.

With the crowd still buzzing from the opening acts performance it was now time for Jinjer to kick things up several notches with their hugely popular metalcore music. With the release of their latest album Wallflowers, not only is this a great reason to launch this tour, but also give their rabid fans a taste of new music. With this being one of the first metal shows at the House Of Blues Orlando since the pandemic began not only was the crowd revved up to get back to some live music, but to catch one of the hottest bands out there today.

With the house lights dim and the crowd clapping along to the into music, bassist Eugene Abdukhanov, guitarist Roman Ibramkhalilov, drummer Vladislav Ulasevish hit the stage. The energy level in the crowd shot through the roof, it was pure electricity. The band took over, playing the opening notes of “Call Me A Symbol” as the strobe lights took over, singer Tatiana Shmailyuk made her way out things went to a completely different level of energy. Immediately you couldn’t help but notice the striking glow in the dark eye makeup she had on. It really added to the whole experience of the show. With Tatiana out in front, on the center stage riser she belted out the lyrics as only she can. Her voice is one of the most unique ones in all of rock music. Not only can she growl and be aggressive with the best of them, but she can switch gears on a dime and sound gentle with tons of soul.

With a stage loaded with tons of lights as well as three giant LED screens behind the band, they would make this show a feast for the eyes as well as the ears. Make no mistake, Jinjer made sure that this would be a show that would do everything possible to make this a memorable show. Throughout the night the lights were in constant motion. Every song they changed things up with different imagery on the video screens and light patterns as well. Whether they were bathing Tatiana in lights or highlighting Vladislav’s drum kit while he performed a solo, every second there was something done to engage all senses.

But it is the music that is what everyone came for, and again on that Jinjer delivered in spades. As Jinjer has recently released their latest effort Wallflowers you just knew that it would be featured heavily. Exactly half of the sixteen song set list was dedicated to the new material. Recent singles “Mediator” and title track “Wallflowers” were performed to perfection. They even went back to their first album King Of Everything and played “I Speak Astronomy”. Getting to hear “Judgement(&Punishment)” from Macro was an awesome experience for all. It encapsulated everything that Jinjer is, power vocals mixed with clean vocals, bass and drums laying down an intricate groove laden beat and bone crushing guitars layered on top. The final song of the night was “Vortex” another single from Wallflowers. With tons of melody and a super heavy breakdown it really shows the evolution of the band and was the perfect song to cap off the night.

For fans of metal mixed with prog, this was a night that would deliver. All Hail The Yeti played the part of opener to perfection, with a great set that wound up a music starved crowd. Just like any great show, the main act would bring it home, and Jinjer did more than that. They delivered an incredibly memorable performance. For fans of both bands, this is a must see tour and you will have the added luck of catching Suicide Silence as well.

All Hail The Yeti: