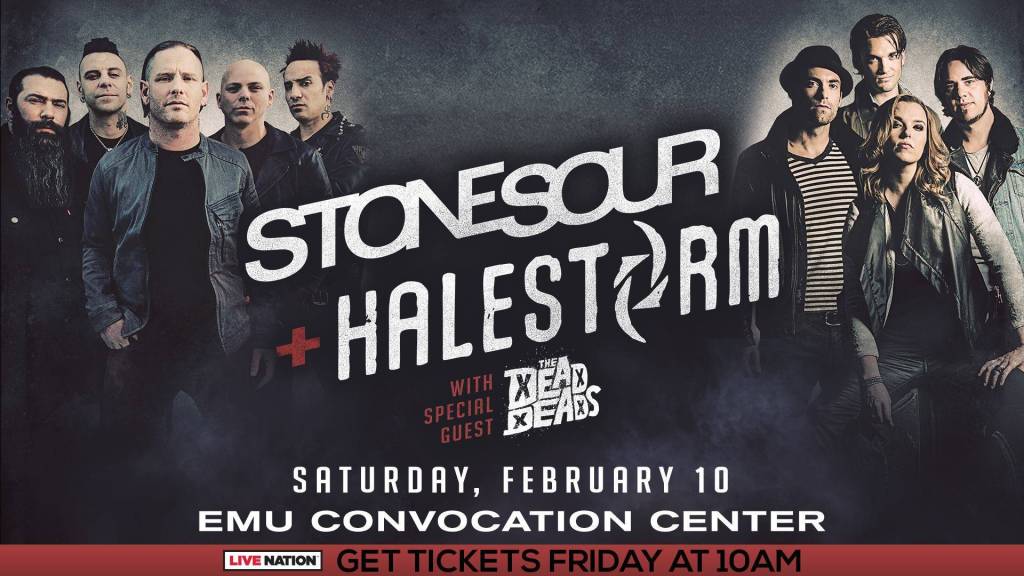 Ypsilanti, Michigan (February 10, 2018) – When Halestorm was tabbed as the co-headliner along with Stone Sour for the Winter 2018 Tour, hard rock fans rejoiced. It was a chance to see each of the budding rock icons perform a full set of their own music on the same stage. With this heavy in their minds, fans of both bands packed into the EMU Convocation Center in Ypsilanti, MI on a wintery Saturday night in February.

Before we begin, let’s set the record straight right from the start – Stone Sour is NOT Corey Taylors ‘second’ band project; Stone Sour was already a solid entity before Taylors ‘second’ project donned the rubber masks and began their meteor-like ascent in the metal world. Any mortal with this much energy and creativity naturally would need multiple outlets to express themselves. Taylor moves effortlessly between both bands and seamlessly maintains their complete separate identities and distinctive sounds.

Make no mistake; the crowd that packed into the Eastern Michigan University Convocation Center on this snow-laden Saturday night came to see Stone Sour. No masks or gimmicks, just straight hardcore rock, and roll, with maybe a ballad or two thrown in for good measure.

After a quick stage break from co-headliner Halestorm, Corey Taylor (vocals), Christian Martucci (Guitar), Johny Chow (bass), Roy Mayorga (drums) and a temporary replacement for Josh Rand (who is on a medical leave), took the stage. Stone Sour, using the instrumental track “YSIF” as entry music, wasted no time once Taylor took his spot up front.

The band came out blazing with “Taipei Person/Allah Tea” the first track off its 2017 release Hydrograd. For the next hour and 30 minutes bassist Johny Chow and Ray Mayorga “one of the world’s best metal drummers” laid the acoustic foundation for the rest to follow. Together they delivered a high-intensity, yet very tight 13-song set which featured tracks off “Hydrograd” and a few iconic tracks from the vault of Stone Sours vast music library. Some of the classics included “Made of Scars” and the iconic “30/30-150” after which the band slowed, not as much to take a breather themselves but give the fans a one!

When Taylor returned to the stage he had a guitar strapped up and began playing “Hesitate” solo. After working through the chorus, the band joined in and instantly amped up the intensity in the crowd. With Taylor throwing water bottles, firing confetti cannons and managing the mosh pit from the stage, the fans were witnessing Stone Sour at their absolute best.

The evening wind down began with “Do Me a Favor” and “Song #3”, which in previous shows was used to end the main set. Unexpectedly, the crowd was taken aback when an appealing, yet an extremely raw version of the 2006 mainstream rock hit “Through Glass” was started by the band. Often used as an encore, the polished, yet edgy performance of this classic radio tune left the fans yelling and screaming for more as the extended version came to conclusion.

After an extremely quick break off stage, the band reappeared to the thunderous roar of the appreciative fans! Breaking right into “Absolute Zero” from 2012 release House of Gold and Bones, Pt.1, Taylor instantly became the leader of an intense singing battle between different parts of the arena. It was an amazing scene in where Taylor could silence the crowd or bring them to hysteria with just the motion of his hand.

The night came to an end with a neck-breaking performance of “Fabuless”, a track off “Hydrograd”. With colorful air-dancers across the front of the stage, multi-colored flashing lights, and loud screaming fans, Corey Taylor was in his environment. A master showman with a strong, powerful voice, he IS the face of Stone Sour – one of the most Iconic Rock bands on the planet.

It’s not very often if ever, a band finishes off such a powerful show by playing a track off their latest release; only a band that has confidence in their music and product they put on stage night after night would even think about it. Stone Sour did more than think about it tonight; they went ahead and did it. And judging by the crowd reaction, it was a wise decision!

The Pennsylvania-based Halestorm had the middle slot of the three bands listed on the outdoor marquis this night. Led by vocal powerhouse, Lizzy Hale, along with brother, Arejay Hale (drums), Josh Smith (bass) and Joe Hottinger (guitar), the band is out in support of their 2015 LP, Into the Wild Life. With a reported, yet unnamed new album almost complete, fans wondered if they would hear any new material tonight; they wouldn’t have to wait long to find out!

As the lights dimmed and Lizzy Hale approached the microphone stand with her white Gibson Destroyer strapped over her shoulder, the crowd came to their feet in anticipation. When the band broke into the brand new, unreleased “Black Vultures” off their forthcoming album, the musical onslaught was on.

Backed by driving guitar of Hottinger and the powerful, mind-numbing vocals of Hale, the band ripped through their planned 15-song set with energy and precision. Hard rock radio stalwarts “Love Bites (So Do I)”, “Mz. Hyde”, ”Amen” and “The Reckoning” were just a few notables the band covered in the first half of the show alone!

One of the more subdued moments occurred during the cover of the Adele classic “Someone Like You”. While playing a white piano at the center of the stage, Lizzy stopped singing and began to talk to the crowd about children and growing up. While talking, she effortlessly segued right into a beautiful heartfelt solo rendition of “Dear Daughter” from 2015’s Into the Wild Life. This seemed to relax the crowd and provided her hard-working band a well-deserved breather.

That was all the rest the band would get during the rest of the set though. As soon as the piano was moved backstage, Lizzy and brother, Arejay, fired the crowd up again with the beginning licks off current radio favorite, “Apocalyptic”. It was during this time Arejay was featured during his performance of a mesmerizing drum solo that encompassed each member of the band. After a well-deserved ovation from the appreciative crowd, the band continued right into “I Am the Fire” and their first radio hit, 2009’s “I Get Off”.

As Halestorm worked through crowd favorites, “Freak Like Me”, ”Mayhem” and their last song of the night, “I Miss the Misery”, fans were treated to the extreme energy and thundering vocal prowess not many bands can duplicate.

With performances as tight as this and as musically solid as any band on tour, Halestorm is positioning themselves as a force in the world of hard rock. That being said, no wonder fans are clamoring for a new album!