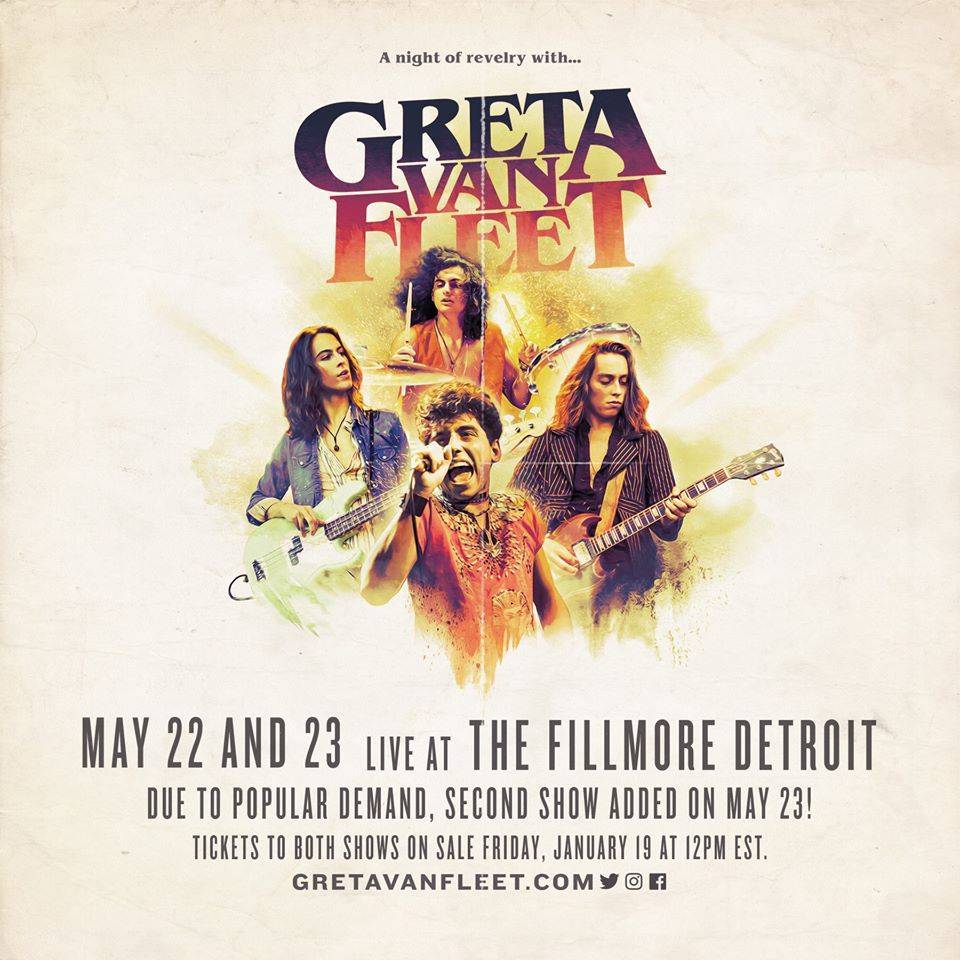 Detroit, Michigan (May 23, 2018)  – The quartet has been described as having a sound similar to a reincarnation of Led Zeppelin, but Greta Van Fleet is the future of rock as we know it. Twin brother’s, Jake Kiszka (guitars), and Josh Kiszka (vocals) join forces with younger brother, Sam Kiszka (bass/keyboards) and friend, Danny Wagner (drums), to bring the sold-out Detroit Fillmore to their knees in the second of three Detroit, MI shows. Their timeless music stretches the imagination as it fuses metal, pop, blues, and grunge, culminating in a sound that stands apart from the crowd. 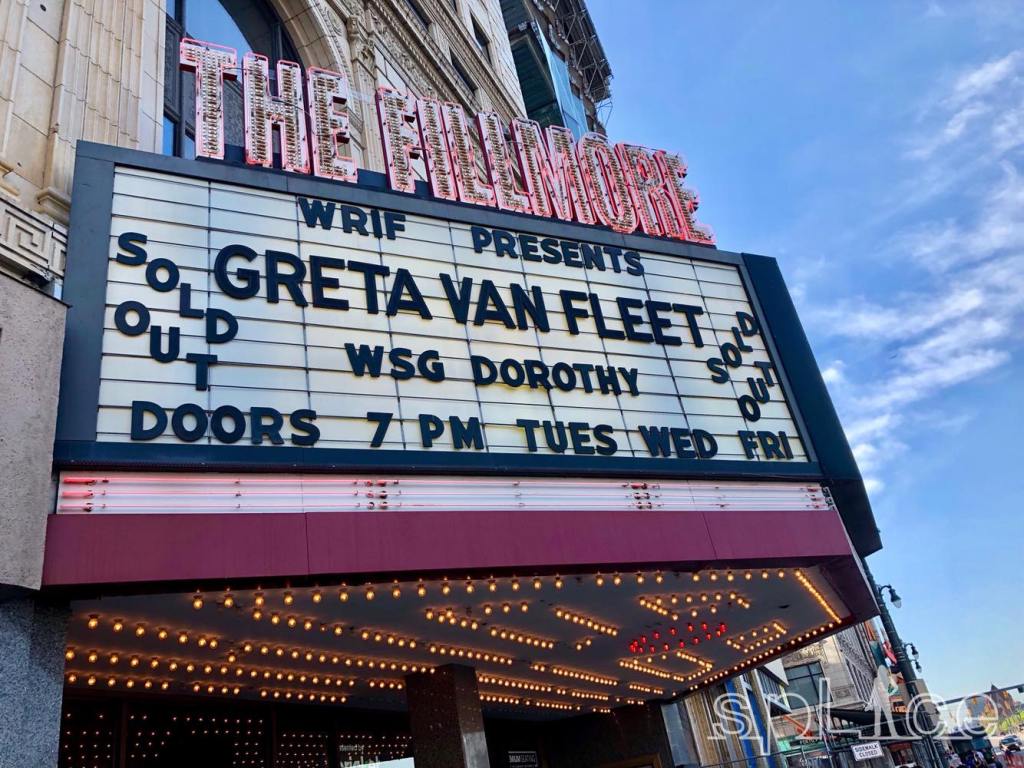 101 WRIF was on hand to not only welcome fans to tonight’s show but also invite them to the return of Michigan’s current favorite band later this year at the Fox Theatre, Detroit, MI. Stay tuned to Splice for developing details.

The familiar chords of “Highway Tune” off 2017’s From the Fires got the set started on the right foot. Followed up with the moody “Edge of Darkness”, before diving into yet unreleased, “When the Cold Wind Blows”, and back to From the Fires with “Talk on the Street”. They lured fans in even more with “Flower Power”, then another unreleased track, “You’re the One”, and the Howlin’ Wolf cover, “Evil (Is Going On)”.

After performing “Mountain of the Sun”, and “Watching Over”, GVF had certainly won over any critics in attendance of this home state show tonight. Having seen GVF perform in December 2017 at Saint Andrew’s Hall, Detroit, MI, it was nice to see how much they have evolved in less than 6 short months.

GVF performed a medley of four songs when they doused us with “Lover Leaver Taker Believer”, introducing the audience that ranged from mere toddlers to fans in their 80’s, to this new track, before launching into their two-song encore.

While boldly strutting across the stage in his character tunic, belting out the lyrics to “Black Smoke Rising”, we were sure the end of the night was in sight. Knowing that all of their popular tracks were already laid out, and we’d heard some new music, there was only one thing left unsaid… GVF’s #1 iTunes track, “Safari Song” had not yet made an appearance.

The somber faces were instantly reignited when the familiar opening riffs tore through the venue. But, within a matter of minutes, the murmurs started again as the guys left the stage and the fans had to start filing out. It was “a night of revelry“; filled with hits that had you standing in today, but feeling like you were transported back to the 60’s and 70’s.

The tremendous musical talent that emits from these four barely-adult men is unreal. It is no wonder why Greta Van Fleet is already headlining sold-out shows all across the globe. If you thought their studio albums blew you away, try catching them live! We’re eager to see what the future has in store for these audacious guys.

A blissful week in Michigan. Thank you, Detroit. 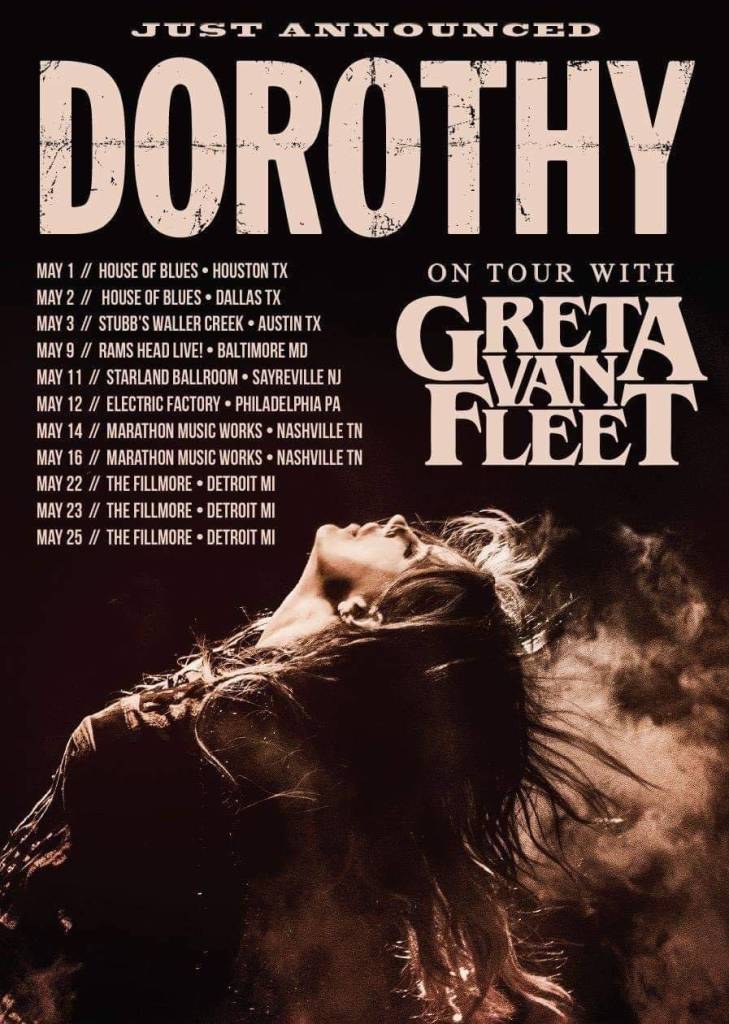 Supporting Greta Van Fleet on tour is Dorothy, who effortlessly wrangled in new fans and captivated old alike with her 9-song performance. The carefully-curated set list included tracks from 28 Days in the Valley, that was released earlier this year, as well as 2016’s Rockisdead.
“White Butterfly”, “Naked Eye”, “After Midnight”,


“Pretty When You’re High”, “We Need Love”, “Ain’t Our Time to Die”, “Flawless”, “Down to the Bottom”, and “Freedom” provided excellent entertainment while waiting for GVF to take the stage.