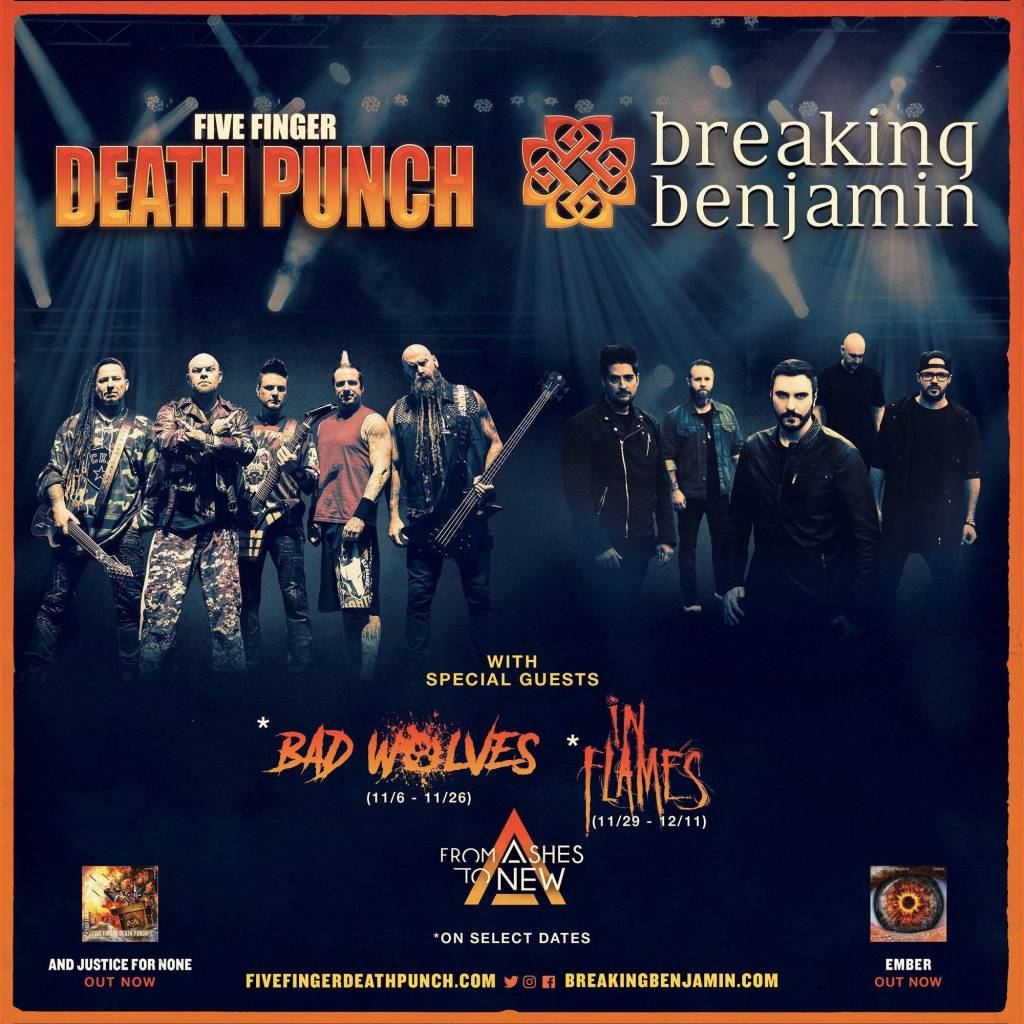 Grand Rapids, Michigan (December 3,2018) – When Five Finger Death Punch and Breaking Benjamin announced their co-headlining tour in 2018, most fans simply assumed that FFDP would be tapped for the closing set each night. But alas, that wasn’t the case Monday night at Van Andel Arena in Grand Rapids, Michigan. This isn’t a bad thing or knock against Breaking Benjamin by any means; their set was outstanding even with Benjamin Burnley under the weather. But it didn’t matter; tonight it was all Ivan Moody and Five Finger Death Punch. They brought it hard and heavy and simply took their performance to a whole new level.

Right from the opening guitar licks of “Under and Over It” the feeling in the arena was different from previous FFDP shows. Out on an extended tour in support or their seventh studio release, “And Justice for None” ,the hard-rocking wrecking crew wasted no time bringing the energy and theatrics they are known for to the Van Andel stage. During the performance of “Trouble” huge plumes of fire shot towards the roof while a huge skull, suspended from the rafters, was illuminated in shades of purple and blue. If that alone wasn’t enough to excite the crowd, Moody prancing across the stage in-between the fiery plumes while pointing and waving to his fans certainly did. And just to point out, this was only the second song of the set!

The night wasn’t all about guitar shredding, hard-driving rock and roll though. FFDP likes to take some time to also make the show about the fans. It has been well documented the struggles Ivan Moody and guitarist Jason Hook have encountered over the years, but to share their story with 14,000 was a revelation. At one point in the show, Moody started to read a short letter that a fan in attendance handed him during the pre-show “meet and greet”. It was about her struggles with addiction and how long she had been “clean”. Moody, relating himself to the young woman’s battle, found her in the arena and presented her with the Staff he had been using as a prop in the show. He stated,” We have a connection, and take this as our commitment. We can be strong and overcome our struggles together”. With those words the arena erupted with applause for both Moody and the unnamed woman.

When Moody finally climbed back on the stage, Jason Hook was waiting for acoustic versions of “Wrong Side of Heaven” and “Remember Everything”, which featured Moody handing out trinkets to the young kids lining the back of the stage. This short acoustic set served as the perfect precursor to the intense, energy fueled ending that was, to the fans dismay, rapidly approaching.

Wasting no time after the acoustic set concluded, the remaining band members rejoined Moody and Hook on stage and the final onslaught was on. First it was “Coming Down” followed by “Burn MF” and then a red-hot cover of the Offsprings hit “Gone Away”.  All three heavy metal hits featured intense pyrotechnics mixed with the driving guitar licks of both Jason Hook and Zolton Bathor. Add in the booming baseline of Matt Snell and the under appreciated vocal prowess of Ivan Moody, you begin to understand why Five Finger Death Punch’ stock is rapidly rising.

If the previous 3-song run wasn’t enough to solidify the night’s epic performance, FFDP stepped up one more time and delivered the final knockout punch of “Lift Me Up” and “The Bleeding”. By the look on the crowd’s faces and the audible murmur heard throughout the arena after the band left the stage, Five Finger Death Punch delivered on what they set out to do from the start; Burn the MF’er Down!