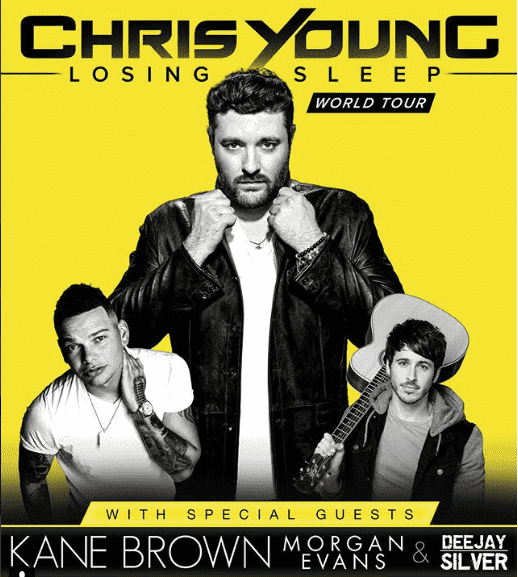 Grand Rapids, Michigan (January 19, 2018) – Chris Young, with the support of Kane Brown and Lanco, brought his Losing Sleep World  Tour to the sold-out Van Andel Arena in Grand Rapids, Michigan tonight. Eager country music-loving fans packed into the arena for the undeniably talented, high-energy, and emotional-intensive performances that were sure to be on the agenda this evening!

When Chris Young brought his 2018 Losing Sleep World Tour to the Van Andel Arena, in Grand Rapids, MI, his music was at the top of the country charts. What started out as a typical Thursday evening was shaping up to be a wild night of hot country music in cold western Michigan!

From the humble beginning of winning a high school talent contest singing Chris Young’s “Getting You Home”, to becoming a viral internet sensation, Kane Brown has run the gamut in his climb to country music stardom. Signed to Sony Music Nashville in January 2016, Kane released an EP titled Chapter 1, and then the self-titled LP, Kane Brown, in December that same year. As 2016 came to a close, very few envisioned that 2017 would be the breakout year for Kane Brown that all artists dream of.

With the release of a deluxe version of Kane Brown, the young man from Tennessee was on his way. His album soared to number 5 on the Billboard chart and Number 1 on the country chart. Kane became the first artist to have simultaneous number ones on all five main country charts. Everyone was taking notice, including Chris Young, who was planning a thirty-show world tour of his own starting at the end of 2017.  Chris Young reached out to Kane Brown to fill the middle slot at all 30 shows. Once Brown’s team accepted, the stage was set for one of the most anticipated shows in years.

After a quick 35-minute set from the country band Lanco, the stage was set for the budding superstar, Kane Brown. The large, multi-tiered stage was semi-illuminated; the anticipation and mutters of the crowd were evident. As the arena lights finally dimmed, Kane Brown took to the stage, the low chatter quickly turned into deafening roars! The fans were ready for a show and they would not be murmur tonight.

Opening his planned 55-five minute set with “Found You” Brown had his fans on their feet and singing back to him note-for-note. He masterfully worked the stage, side-to-side, like an experienced veteran performer does. Surreal beams of light with pulsating color cascaded down from around the stage. The ‘light show’ as some call it, created a high-intensity atmosphere not normally associated with country music. Brown, who is quickly becoming a master showman, fed off the crowd’s energy using the surge to move effortlessly thru a 12-song set highlighted by favorites “Used to Love You Sober”, “Heaven ” and “What Ifs”.

Kane kept everyone going with “Hometown”, “Rockstars”, “Better Place”, “Medley (“Billionaire”, “Miss Jackson”, “Over My Head”)”, “There Goes My Everything”, “Learning”, “Closer”, and “Pull It Off”. When his high-energy, 55-minute show came to a close, the crowd showered Kane and his band with appreciation and cheers of admiration. As if planned long before, Brown and his band took to the edge of the stage to pass out the remaining guitar picks while smiling and waving to the appreciative fans. Make no mistakes about it, Kane Brown is a country superstar; it is only a matter of time before he headlines his own world tour.

Tonight Lanco had the honor to open the show for the sold-out Chris Young: Losing Sleep World Tour 2018 at Van Andel Arena in Grand Rapids Michigan. From the onset, the fans in attendance could tell tonight was going to be a little different than normal. With the loyal following that LANco has developed during their short existence, and their popularity growing daily, Van Andel was packed early and buzzing with anticipation.

As the band took the stage at 7:30 PM for a 35-minute set, the sold-out venue erupted with excitement. Brandon Lancaster, the matriarch, and namesake of the band put on a show few will soon forget. Performing highlights from the album that was just released today, Hallelujah Nights, Lancaster’s presence and interaction with the fans made the set feel shorter than it actually was. The performance flowed effortlessly with each song and kept the crowd engaged and on their feet throughout the night. As the last notes of Billboard top ten fan favorite,“Greatest Love Story”, brought the night to a close for Lanco, it was evident by the loud cheers of approval why they were chosen 1/22 Cream of Country 2017!

After very entertaining sets from Kane Brown and Lanco, it was Chris Young’s turn to take the stage. When the arena lights were extinguished, the crowd stood in anticipation. Suddenly a white-hot spotlight from overhead illuminated Young on the massive stage. With his hands cupped tightly around the microphone, hiding his lower face, he starts off the night with the title track off his latest release, Losing Sleep. As the band picks up the momentum they move effortlessly into “Gettin’ You Home”, a number one hit off Young’s sophomore album, 2009’s The Man I Want to Be. By now, the whole arena is up dancing and singing back at Young and his band word- for-word, becoming part of the show themselves.

While Young performed hit after hit from his 7-album music catalog, his emotions were overtaken multiple times by the sheer volume from the crowd. Between songs he was often seen stepping back from the microphone shaking his head and grinning ear to ear with a look of amazement and appreciation. This scene repeated itself throughout the night until he finally announced to the crowd, “this is the biggest arena I have ever sold out and my favorite show of all-time”, which, you guessed it, took the crowd’s noise level to a whole new level.

Chris Young has figured out a path to success: make good music in the studio and then play what the fans want to hear. Whether it be new additions to his set like tonight’s “Hangin’ On” and “Where I Go When I Drink” from his latest album, Losing Sleep, or dipping back in time to the classics like “Beer or Gasoline” from his 2006 Chris Young debut album like he did tonight. From the enthusiastic reaction of tonight’s crowd, he proved this formula works.

As the show was winding down, with “You” from the album Neon, and a duet with Cassadee Pope, “Think Of You” from 2015’s I’m Comin’ Over, the crowd wondered aloud what Young had left for an encore. As Chris slowly tried to leave the stage while the band played, the crowd went wild. When the band finished, the audience got even louder as Young returned and held his arms up towards the fans. The crowd turned it up to 11, giving all they had for the man they came to see tonight. Finally, Young grinned and proclaimed to the crowd ”this is by far the loudest show I have ever played” which, you guessed it, brought the roar to a deafening level to which Young announced,“I was going to say something, but I just can’t top this, so I will just sing!” Performing arguably his biggest hit “I’m Comin’ Over”, the delirious crowd is left with a performance that other artists can only wish for.

Chris Young is a music artist that sneaks up on country music fans. His music catalog spans seven albums, several of which are certified gold, and the diversity it contains is second to none. From upbeat songs to country ballads that some fans actually say “speak to their soul”. Chris has a unique sound that mixes the old with the new. If you’re not a fan of Chris Young, you’re not a fan of country music.