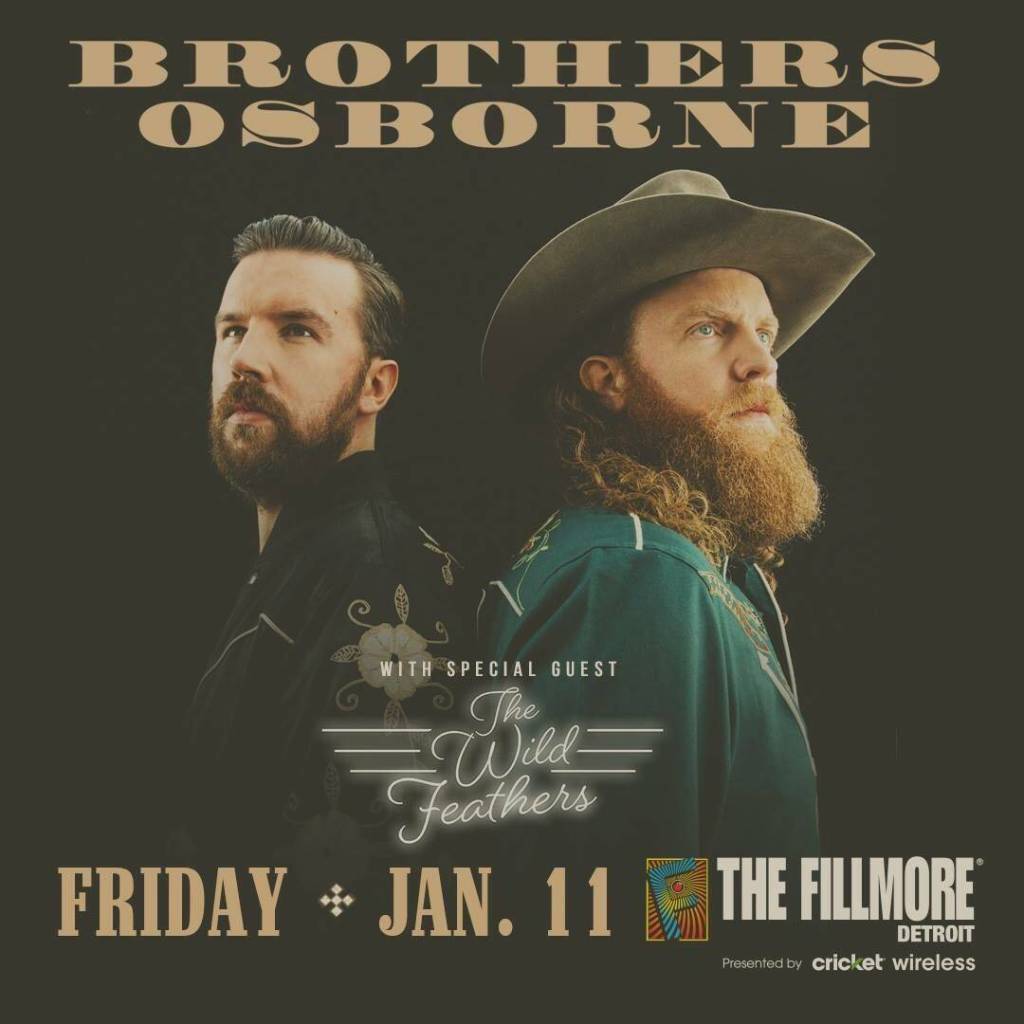 Detroit, Michigan (January 11, 2019) -When the Brothers Osborne took the stage Friday at the sold-out Fillmore Detroit in Detroit, Michigan, there wasn’t a grand introduction by a local radio personality or any giddy pre-show build-up. To be truthful, none was needed. Judging by the raucous crowd on hand, most who waited hours in the freezing cold, they were here tonight to party and see a good show, and the Brothers Osborne did not disappoint.

On the second night of their 2019 tour, the Brothers Osborne cranked up the energy right from the onset. With a mix of southern rock and traditional country, their crowd pleasing sound left no doubt what genre they support. The first two songs of the night, “Drank Like Hank” and  “Shoot Me Straight”, both radio favorites, feature John Osborne’s incredible guitar skills that rival some of the best pickers in music today. His stage energy and emotional interactions with the crowd never seems to waver. One minute he is on a monitor crate wailing away at his guitar then the next he is waving at the crowd, all the essence of a definitive showman.

Younger brother TJ Osborne, without a doubt, is the front man of this tight knit group. Unlike most other duos, both brothers have a clear separation in their distinctive but incredible sound, and TJ is the man behind the vocals. Every song  featured TJ ‘s resonating vocals, with both fills and rhythms supplied by John and the rest of the band. Songs such as “Rum” and the acoustic version of “I Don’t Remember Me (Before You)” highlighted his incredible vocal range and his uncanny ability to mesmerize his audience or get them up dancing and singing. While others, like the Dierks Bentley cover “Burning Man” ,sound eerie yet reassuring, but not overly processed as covers sometimes do when performed live.

The energy and vibe from the Brothers Osborne onstage was only exceeded by the enthusiasm and emotions from the overflowing crowd. As the 18-song, one hour and forty-five minute set began winding towards a close, Brothers Osborne had saved the best for last.

Working the crowd into a frenzy like well seasoned artists do, they closed the night with some of their biggest hits in from their first two LP’s. High energy fan favorites “Stay A Little Longer”, ”It Ain’t My Fault”  and the moody “Pawn Shop”, were used as the setup for last song of the night,a cover of the John Denver classic, “Take Me Home Country Roads”. As the standing crowd roared their approval for the outstanding performance, one was left to wonder if the Brothers Osborne were on the precipice of something bigger.Being a fan myself and judging by the crowds overall reaction tonight, I would respond with a resounding YES!

With this being only the second show of their 2019 headlining tour, to say we were impressed would be an understatement. Everyone in the venue seemed to be blown away by the energy, song choice and over all enthusiasm displayed tonight by the Brothers Osborne. Whether it was John’s smoking guitar work or TJs deep resonating vocals, the brothers have created a foundation that works. If you’re a fan, snatch up those tickets for the upcoming shows now, they sell out quick. If not, what are you waiting for? The future of country music is now, and you were in attendance tonight, you’ll agree its in good hands with the Brothers Osborne!