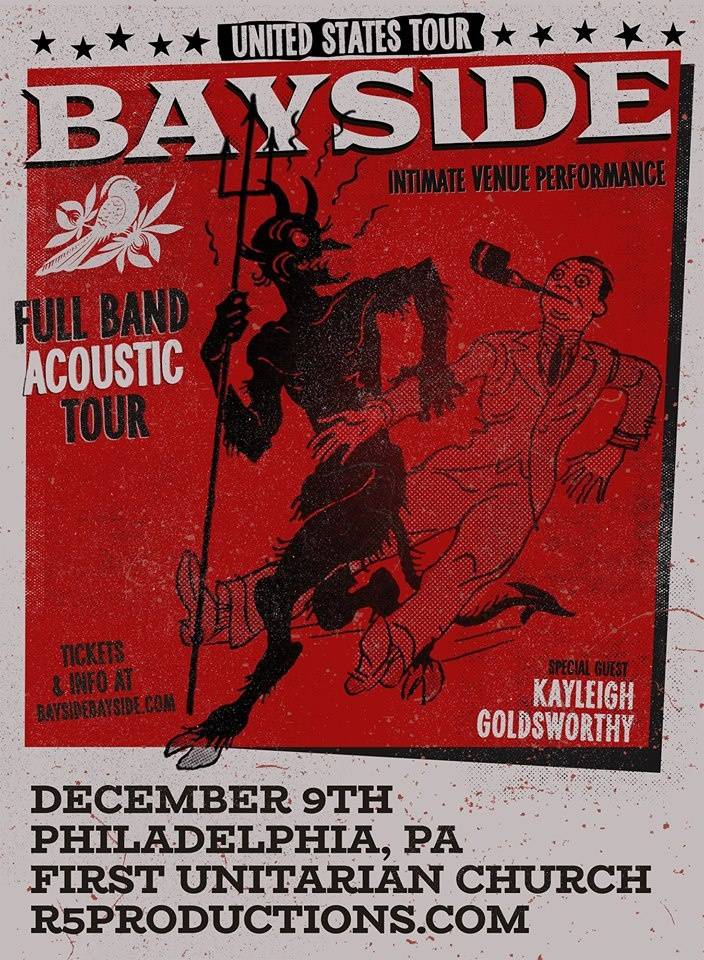 Philadelphia, Pennsylvania (November 9, 2018) – Bayside, the punk rockers out of Queens, New York, stopped through Philly at the First Unitarian Church of Philadelphia during their United States full band acoustic tour. Their current tour is in support of their newest album release, Acoustic Volume 2, which was released September 28, 2018 via Hopeless Records. Acoustic Volume 2 The tour was to feature full acoustic shows in intimate venues. Their Philly performance was no different, the basement of the First Unitarian Church of Philadelphia, known as “The Church”, is as intimate as it can get. The Philly show was sold-out, as were most of the shows they have played so far. Bayside was returning to play The Church for the first time in 9 years tonight.

Opening for Bayside, the classically trained violinist, Kayleigh Goldsworthy. Previously she was part of the punk band The Scarlet Ending, with her twin sister, she also has toured with Young & Sick. Kayleigh recently moved to Philadelphia to become more involved with the local indie punk scene and also just released a solo album, All These Miles.  Kayleigh played a few songs, including “Cursed To Wander” alone on stage just with her guitar. She joked about being dressed in an all-orange outfit that normally looks like a traffic cone, but is appropriate in Philly to support the Flyers hockey team. She played the last song of her set with Nick Ghanbarian on bass and Chris Guglielmo on drums, both members of Bayside. If you want to check out this very talented artist Kayleigh will be playing at the First Unitarian Church of Philadelphia, again, on December 20, 2018.

The Church was packed with members of the Cult from the stage all the way to the merch table. Bayside is a self-proclaimed, loyal cult of friends and fans. The crowd was full of energy, not the normal energy you would expect to see in a Bayside crowd ready to start a circle pit, but an excited energy!

Bayside opened with “Monceau” off of their album, Shudder, followed by “Devotion and Desire” from their self-titled album. Lead singer, Anthony Raneri’s vocals are album quality live, filled with passion and soul. Between songs Anthony talked about the acoustic album, the band is getting older, the fans are getting older, and they wanted to release something that their fans could still enjoy. He talked about the band hitting their 20-year mark. He also reminisced about the last time they played “The Church” nine years prior, and that it was Chris Guglielmo’s first show with the band. Chris gave a little motivational speech, talking about how nervous he was that night and not to let fear stop you from doing something. Anthony joked about a girl that got all of her front teeth knocked out at their last show at “The Church” and was hoping she was at the show tonight, but no such luck.

Bayside went on to play a total of 19 songs. Playing Acoustic Volume 2 in its entirety and most of their first acoustic album, Acoustic, Including “I Can’t Go On”, “Sick, Sick, Sick”, “Blame It On Bad Luck” and “Duality”. They also played a cover of “Don’t Look Back in Anger” by Oasis. Bayside was accompanied by Kayleigh Goldsworthy playing the violin for the entirety of their set. At the end of their set, during the song “Landing Feet First” there was a proposal and the couple was invited up on stage for an emotional moment. Of course, she said yes!