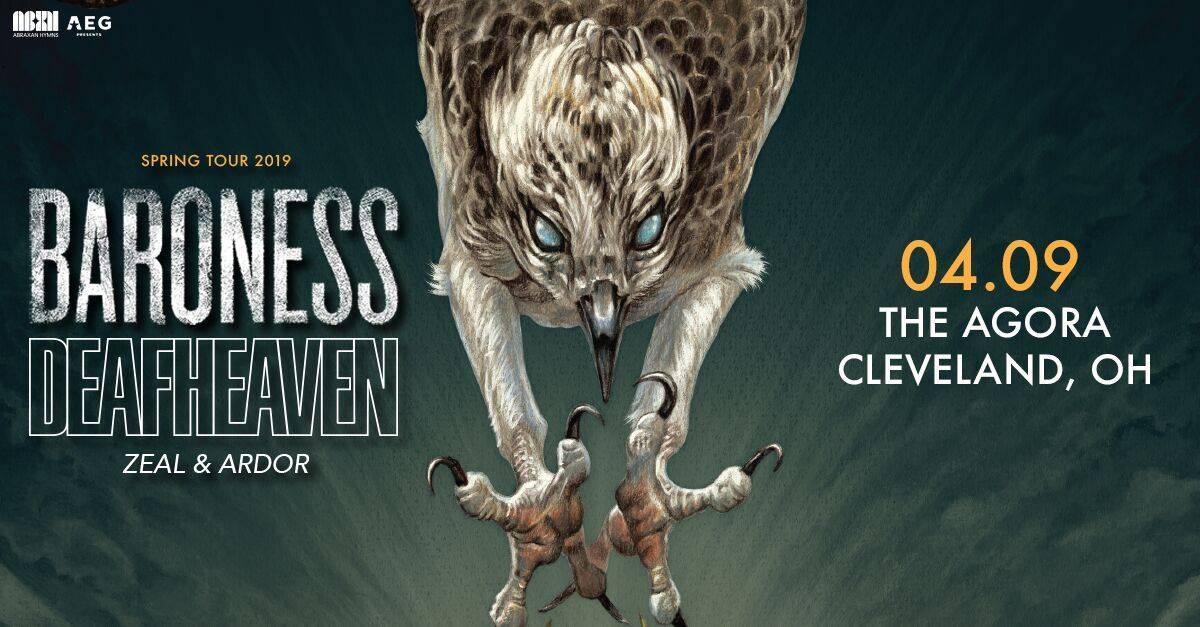 April 9, 2019 (Cleveland, Ohio) – Tonight’s venue was the world famous Agora Theater. Located in the Rock-n-Roll capital of the world, it was a dually-aligned destiny for our trip to tonight’s nether world.

An evening for worshipping everything heavy. With various progressive metal that included blues, shoegaze, and a little sludge, it was time to push the boundaries, and make the ears ring.

This lineup was as similar as it was different. What does that mean? On paper these three bands are all very similar, sharing parts of some metal genres, and being right next door with other metal genres. When they offered up their music though, you could really feel how each band stood out and made their own signature mark on the crowd.

Co-headliners Baroness and Deafheaven were joined tonight by Zeal and Ardor. With a large crowd in attendance, it was time for the show to begin.

As the completely black stage gained a hint of light illuminating the backdrop logo, the opening instrumental track Sacrilegium I got things started. This Basel, Switzerland based six-piece is led by Manuel Gagneux. Tonight featured Baroness bassist Nick Jost filling in on bass.

“Blues, Gospel and Soul meet harsher music.” That is how Zeal and Ardor describe themselves in seven words.

With this style, they weave in-and-out of those influences from song-to-song. This keeps things very interesting giving their set a nice flow. From the eerie sounding In Ashes, to super-heavy and black Come on Down, to the heavily blues-influenced chant The Devil is Fine, they impressed the crowd that had amassed before them.

First up for this co-headlining show was Deafheaven. With their shoegaze style of music mixed with blast beats and black metal vocals, they’ve been carving themselves out a notch in the scene since 2013’s critically acclaimed Sunbather.

It is also with this mixture of varying styles that puts them in a very polarizing position – how one might perceive them. It is definitely not your typical metal. The title track from their debut album Sunbather will show you just about everything you need to know about their approach to music. This ten-minute opus includes soothing shoegaze instrumental sections, heavy-as-hell black metal sections, and even some post-rock arrangements. Blackgaze some call it.

Tonight, there was a large portion of the crowd ready to see Deafheaven in action. With the stage obscured in darkness, they struck up Brought to the Water from 2015’s New Bermuda. The backlights came alive as the blast beats hit and the guitars kicked in. Vocalist George Clarke bellowed out “A multiverse of fuchsia and violet surrenders to blackness now” as the lighting followed along.

Their second song featured their newly released single Black Brick. Veering from their earlier formulas, this track is one hundred percent metal, and only flaunts a touch of blackgaze at towards the end. Is this a new direction we can expect from Deafheaven on their upcoming releases? Maybe a little, but doubtful there will be a complete change. This fits in great with the existing musical landscape and creates some variation, which is always a great thing in the evolution of a band.

They continued on for over an hour until they finished up their lengthy set with Dream House. They put the cap on what was a successful first half of the co-headlined event. Deafheaven might not appeal to everyone in the metal community, but those people were not here tonight.

With a solid catalog of albums Red Album (2007), Blue Record (2009), Yellow & Green (2012), Purple (2015), and the upcoming Gold & Grey (2019) they have a bevy of music to share with their fans. Interestingly, founding member John Baizley is also the artist that designed and illustrated all of the album covers.

With an all too familiar completely black stage, Baroness made their way to their positions. Dim blue light illuminated the four figures as they started into their opener, A Horse Called Golgotha. It did not take long for the lights to fully illuminate the stage as they kicked things into high-gear.

As they continued into Morningstar, the on-stage chemistry between John and Gina was undeniable. Playing off of each other in dueling fashion, they seemed to be having the time of their lives. With the grinding and slightly sludgy sound, the guitar riffs were in full-force as Sebastian pounded out the beats in perfect rhythm. Nick (fresh off helping Zeal & Ardor earlier tonight) pulled double duty, as he kept the bass grinding, and filled in on the keyboard as needed.

They played two songs from the upcoming album Gold and Grey tonight. Six songs in, they presented Borderlines, which follows the sonic development of what Shock Me presented in 2015. Later in the set, they cut loose with Seasons, letting their metal chops flow. As this song progressed with fast riffs and faster drum beats, John’s vocals were delivered slowly and deliberately over top of this awesome metal music landscape.

Their set was filled with fan favorites, and the crowd could not have been more pleased. It was easy to hear this, as deafening applause would strike up between each song in their set.

There is nothing stopping Baroness anytime soon. As they prepare for the release for Gold & Grey, they have a summer tour all lined up. The Gold & Grey Tour kicks off in Mexico City on June 19 with a few dates in Central America, before returning to the States in July to continue their dominance.