Detroit, Michigan (January 26, 2020) – From his star-infused beginnings with Dr. Dre in the early ‘90’s, to his seemingly infinite featured spots rhyming for the likes of Ice Cube, Katy Perry and everyone in between, the Long Beach, CA emcee always seems to always have a buddy close at hand. Even with his nationally syndicated cooking show, he chose the legendary Martha Stewart as his counterpart to be in front of the cameras with him. Point being, Snoop Dogg has always had someone close by to bolster what has surely been the most versatile career in hip-hop music history!

Sunday nights I Wanna Thank Me Tour stop at the sold-out Fillmore Detroit was no different. Gliding through a cloud of smoke in a way only Snoop can – his grand entrance was only perpetuated by his small entourage that preceded him. A DJ, two additional back-up emcees, two scantily clad pole-dancers and one extraordinary large cartoon mascot dog smoking an equally gigantic fake blunt, lead the procession to the stage. Then there was Warren G, Snoops west coast banger pal who opened the show and later joined the “Doggystyle” singer on stage for a few old-school jams reminiscent of his days at Death Row Records.

Within his three decades of hip-hop, Snoop has lost a cluster of friends and contemporaries to violence and untimely passing’s: Eazy-E, Tupac Shakur, The Notorious B.I.G., his 213 protégé, Nate Dogg in 2011, and most recently, the ascendant Los Angeles emcee, Nipsey Hussle, in March 2019.

The list goes on, but the aforementioned artists were who Snoop and his entourage chose to pay tribute to in the Motor City tonight. Each fallen artist got his own cover — Biggie’s “Hypnotize”, Tupac’s “2 of Amerikaz Most Wanted”, along with video montages of the fallen artists at their best, played from a large screen spanning the back of the stage.

It was a valuable series of tributes dedicated to some of the pioneers of the hip-hop movement minus the Hussle segment, which aired over Snoop’s new song “One Blood, One Cuzz”. The track itself is a pleading testament for unity and an end to gang violence (Hussle was long affiliated with the Crips and was shot 10 times by another gang member), but unfortunately the message could have been misconstrued by the actions on stage. During the performance of the song by Snoop, his over-sized dog mascot tossed blue and red bandannas to the appreciative crowd. Unbeknownst to most in the venue, those specific colors are known gang colors and were distributed with poor judgment in relation to the songs undeniable message of hope and resistance. Its hard to justify an icon such as Snoop letting this oversight transpire at such a high profile show; but it is Snoop Dogg and he has never followed protocol up to this point!

With the vibe now mellowed out a bit, Snoop’s DJ spun up the House of Pain classic “Jump Around”, beginning to build on the crescendo for the rapidly approaching end of night soiree.  With pulsating lights that moved faster and faster as the crowd got pumped up to the track and after getting the crowd to jump up and down, Snoop then brought the dance vibes back with one of his all-time classics, “Gin & Juice”. This undoubtedly was the song of the night as the exuberant crowd grooved to the funky hip-hop sound while nailing all the chants and singing along to the classic vocals on the track word-for-word. It was visually stunning watching the venue transform from literally ‘moving the floor’ during “Jump Around“, to a smooth and sultry swaying motion all dictated by a perfectly assembled setlist from the hip-hop legend.

Snoop Dogg would then get the crowd to cheer as loud as they had all night by dropping the beat for the Wiz Khalifa collaboration, “Young, Wild & Free”. Historically the last song of the night, it did not hinder the crowd from lighting up one last time to toast the hip-hop Icon for the evenings enchanting, yet over-the-top performance.

Tonight’s show was an expectedly loose, high-spirited 100-minute performance; loaded with pulsing rap classics, covers and new cuts from Snoop’s worthy I Wanna Thank Me album. Tributes aside, we got a full-on retrospect of Snoop Dogg‘s impressive 30 year career – from the early beginnings, right up through 2020. From a casual fan, to the hardened lifer, this tour has something for everybody. It’s a travelling party from one city to the next, mixed with some killer sounds and rhymes for your entertainment. If you’re anything like us, that’s someplace we want to be! 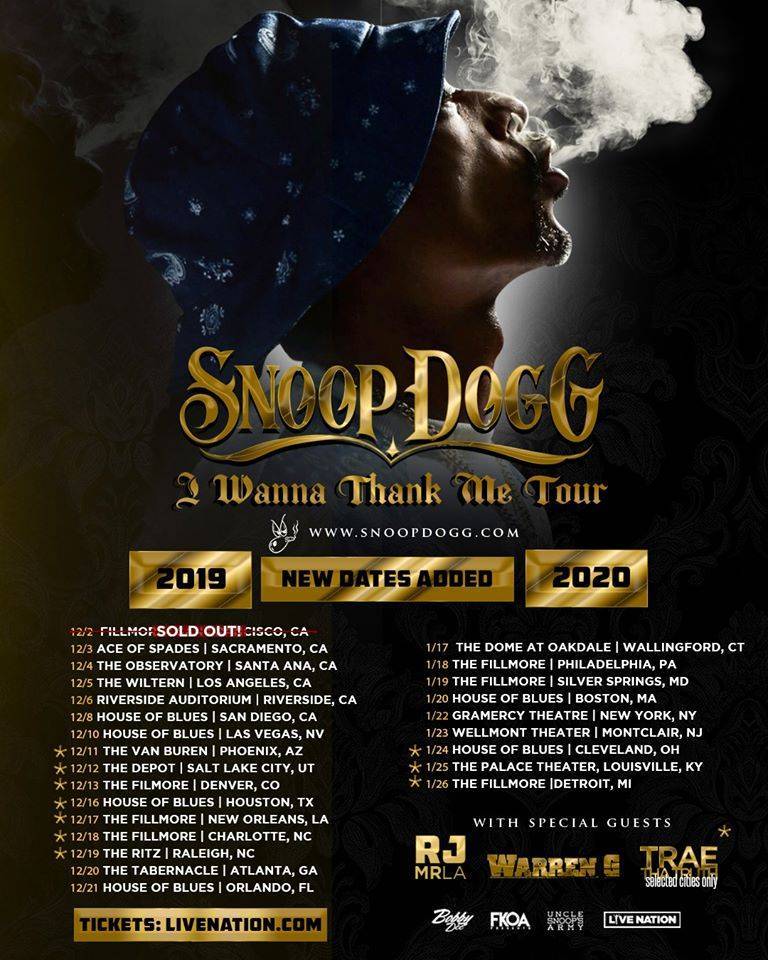