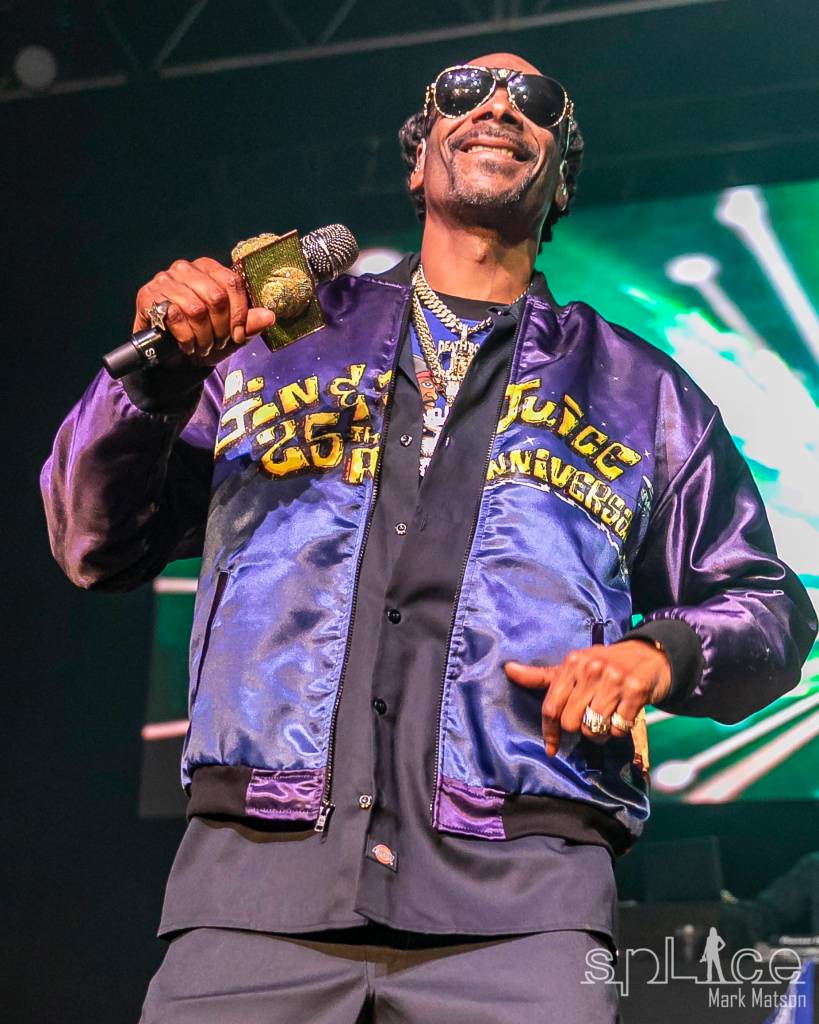 Orlando, Florida (December 21, 2019) – If you were looking for a party on Saturday the twenty first of December, The House Of Blues in Orlando was the place to be, because Snoop Dogg was in the house. When an icon like Snoop comes to town, the party goes to a whole different level and this instantly makes it a hot ticket. With his I Want To Thank Me tour in full swing in support of his seventeenth studio album of the same name, it’s no surprise that this was a sold out show.
With a minimal stage setup consisting of two park benches on either side of the DJ’s booth draped in alternating red and blue bandannas, it didn’t seem like too much. But what had the packed crowd wondering was the two tall poles on either side of the stage. Everyone had their theories what Snoop had in store for the show; with the popular one being stripper poles. Finally, the man of the hour ambled onto stage to the cheers of everyone. Wearing a blue satin jacket emblazoned with the words “Gin and Juice” on the front and sunglasses, he took one last drag of something smiled and kicked into the show. Over the course of the next hour and a half, he packed as much material into his show as anyone could possibly do, and what a show it was that he put on. Besides his notorious rapping skills, during the show he had two dancers come out during various numbers. If that wasn’t enough, yes, he even had scantily clad women make good use of the poles setup on stage too. Joining Snoop on stage was Nasty Dog. A giant dog costumed person that had his own bottle and over sized ‘smokable’ items. While all this was great fun and fit perfectly into the show, It’s Snoops skills with a mic that brought in the sell out crowd to the House Of Blues. In that department he delivered what everyone wanted in the style that has made him a world famous household name. His set spanned his entire career, from his beginnings on Death Row records right up to today. Of course, he did massive crowd favorites “Gin and Juice” and “Who Am I (What’s My Name)?” where everyone in the house was singing along. During the show, he even managed to share something he was smoking with a fan. Hopefully that person won’t have to take a random test anytime soon. After taking a quick break, Snoop came back and did a killer tribute to some of the fallen stars in the rap world. Starting off he did Easy E’s “Boyz n The Hood”, then went into Notorious B.I.G.’s “Hypnotize”, and finally Tupac Shakur’s “Amerikaz Most Wanted”. While he was covering those, on a giant video screen they were playing images of all of them during their performances. He continued his tribute by performing “One Blood, One Cuzz” which was written about the death of Nipsey Hustle. On the giant screen they played a nice montage of Nipsey Hustle. At times Snoop would turn around, look up and watch it while tapping his fist over his heart. What better way to close out the night to perform “Young Wild and Free”. Snoop had everyone sing along to it and even made sure the lyrics were on the video screen for all to see.
If there is one sure thing in this world, it’s you will have fun at a Snoop Dogg show. Tonight’s performance at The House Of Blues in Orlando only proved how true that is. The I Want To Thank Me Tour continues through the end of January, so catch it while you can.