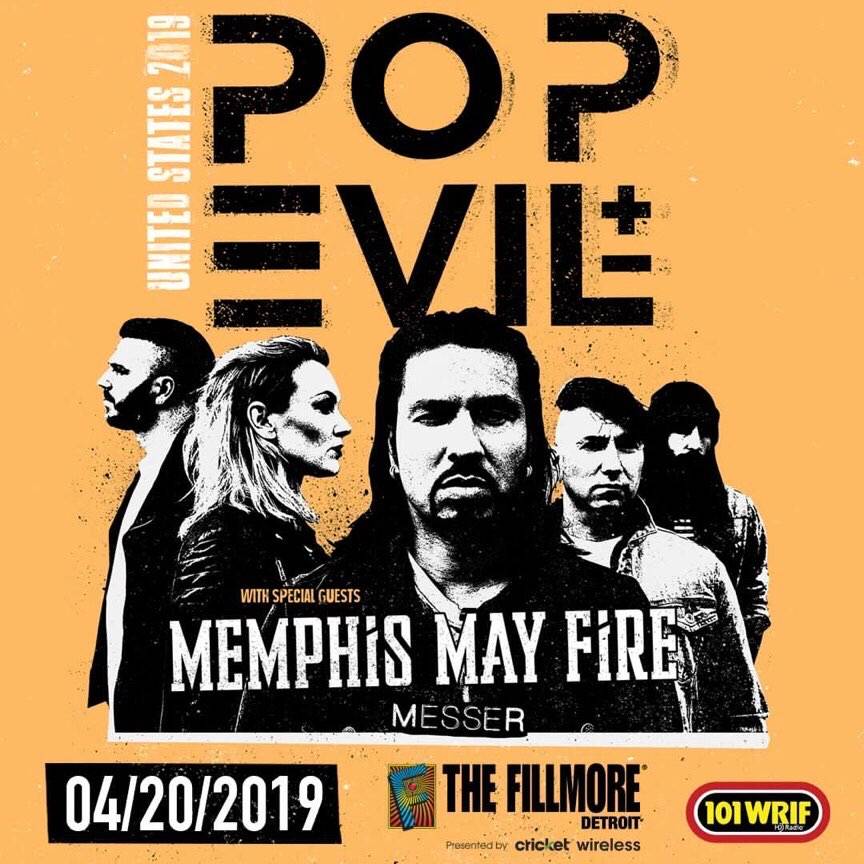 Detroit, Michigan (April 20, 2019) – The crowd that packed The Fillmore Detroit, tonight didn’t seem to care it was the day before Easter. Michigan’s own Pop Evil was in town, and based on history, fans started partying earlier than usual in anticipation of a burner of a night!

Lead by front-man and original member Leigh Kakaty, Pop Evil has weathered changing members and a contentious music genre to emerge as one of the rising powers in rock. Their blue-collar work ethic and steadfast resilience have allowed them to build a loyal following worldwide while still being true to their brand. Searing guitar licks from Davey Grahs and Nick Fuelling mixed with the drum rhythm of “new comer” Hayley Cramer create a paradox that bodes well to the elaborate yet catchy lyrics Pop Evil is known for.

Touring in support of their 2018 self-titled album, Pop Evil put their latest work on full display by playing 7 songs from the album over the course of their 17-song set. After a curious choice of  “Boss’s Daughter” and “Last Man Standing” to start the night, the momentum and energy soon took a positive step forward. Heavy guitar laden versions of “Colors Bleed” and “Torn to Pieces,” set the foundation for the rest night while simultaneously raising the energy in the venue to a new level.

Even though each member of Pop Evil has a vital role in the bands success, accolades should be given to the rhythm section of Hayley Cramer on drums and Matt DiRito on the bass. Their pounding rhythms set the foundation and tone for each song in the bands extensive music library. During “A Crime To Remember” and “When We Were Young,” each took the lead and showcased their scintillating talent. Even though both songs were “ground-pounders” and fan favorites, the stage lighting was a bit lackluster and could have really embellished the evening’s visuals. Kakaty is the unabashed leader but the spotlights should be shared for the fans enjoyment and visual connections.

As all great performances have their ebbs and flows, Pop Evils performance was no different. With a smoking hot run of  “Be Legendary,” ”Rewind” and “Footsteps” leading up to a crescendo of ”Take it All,” fans could have left the venue and had been satisfied, but not tonight. Unfortunately for them, some did and missed a truly epic encore.

Some how, some way, Pop Evil seemed to change gears and ramped up their performance to another level. Starting the encore with the bands very first hit single,”100 In A 55” and moving without hesitation into the lead song ”Waking Lions,” from the album Pop Evil, the venue was pure pandemonium! Finally, as if stabbing the dagger into their prey, they  concluded the evening with one Pop Evils most aggressive and biggest hits,” Trenches.”

I would like to think that tonight’s sold-out show was a special “Made In Michigan” hometown performance. Research tells me that the set-list was a little different than previous shows, but the energy and enthusiasm that Pop Evil brings is the same they display each and every night. If that’s true, it becomes very clear why they are becoming one of the best rock bands out there with a rapidly growing World-Wide fan base. Don’t believe me? Buy a ticket and see for yourself, it’s one a hell of a show!