Grand Rapids, Michigan (January 30, 2020) – When Grammy award-winning heavyweights, Korn, and multi-platinum hard-rockers, Breaking Benjamin, announced their co-headlining tour set for winter 2020, it was hard not to take notice. Having two of the most prolific forces in rock perform on the same stage at the zenith of their popularity is a special event that frankly doesn’t happen often. Tonight, a chilly group of rockers lined up outside of Van Andel Arena, in Grand Rapids, MI, in anticipation of one of the more legendary tours to roll through town in recent memory, Korn and Breaking Benjamin‘s Winter Tour 2020.

Breaking Benjamin has had a contentious existence since the bands inception even though the musical style and lyrical content have remained consistent. Benjamin Burnley, band founder and namesake, has been the primary composer and lead vocalist since the band was founded in 1998. Burdened with continuous lineup changes since their formation, Burnley finally has hit on a stable lineup that has legitimized the band and allowed them to become a major force in the rock genre.

Historically, the band has commonly been noted for its formulaic hard rock sound with angst-heavy lyrics, swelling choruses, and “crunching” guitars, which have become their live performance trademarks. Opening the night with a intriguing version of their triple-platinum mega-hit ”The Diary of Jane”, it was apparent that this wasn’t the same Breaking Benjamin that had occupied this same stage earlier in their career. In fact, the whole set had a new dramatic feel accentuated with a back-lit stage and colored lasers that created a sensation that could only be described as dark and eerie. Adding the visual expressions to familiar songs such as, “Torn in Two”, and the 2015 number-one hit, “Failure”, helped create another layer of nuance to their stage presence that had not been realized in prior performances. Maturity of the band or music familiarity, it really did not matter either way, the crowd was alive and their emotions hinged on each and every song emulating from the stage throughout the 55-minute set.

Even though it was a pure textbook performance when it came to hits such as “Sooner or Later”, and “So Cold”, there were a few mis-steps in the song selections during the abbreviated performance. Deep cut, “Shallow Bay”, had all the elements to make it memorable, but it did not posses the impact or intensity when compared to “Failure”, or the barn-burner, “Polyamorous”. It didn’t matter to anyone in the venue tonight though, Breaking Benjamin’s overall performance was electric and made even the staunchest critic nod with a sign approval.

One of the downsides to a co-headlining tour is both bands get about the same amount of time on stage. Luckily, for the fans in attendance tonight, Korn has amassed a musical library that has spanned nearly three decades and can fill a setlist with the songs everyone craves to hear. Granted, there will always be a few favorites that don’t make the cut, but the upside is you will be able to differentiate the evolution of Korn’s music as they span their expansive catalog from the early classics onward.

Speaking of evolving, lead singer, Jonathan Davis, now approaching 50-years-old, has shed his trademark kilt and become more straight-forward on his musical expression. Yes, he is still intense as ever and still plays the bagpipes onstage for the intro to “Shoots and Ladders”, but now it is at a much more controlled pace, which ironically mimics Korn’s  musical maturation. The nu-metal is still tossed about, but now on a much lesser scale.

“Are you ready!?” singer Jonathan Davis screamed, signaling the opening of “Here to Stay”, the classic track from the band’s 2002 album, Untouchables. With those mere three words the near-capacity venue was instantly energized and came to life in way only a rock show of this caliber could induce!

Following up the opening salvo with a song just a significant in the history of the band is no easy task, but Davis segued directly into “Blind”, a staple in Korn’s catalog and one of the most significant moments in nu-metal era.  The rendition itself was invigorating and massive, one of many highlight moments in the 16-song set. In typical fashion, as the music went the crowd responded in kind, with moshes and crowd-surfers suddenly appearing from a previously languorous pit that continually grew as the evening progressed.

Like seasoned pros, Korn kindled this physical reaction with a career-spanning set-list that ranged from “You’ll Never Find Me”, off their 2019 release, The Nothing, to classics like, “Rotting in Vain”, and “Falling Away From Me”. In a particularly crafty move, the band slipped the chugging passage from Metallica’s “One”, into the end of “Shoots and Ladders”, which was well-received by all in attendance — a unifying moment during a show that sometimes felt rushed, but overall satisfying to their age diverse fans.

Korn closed its main set with its monster 1999 hit, “Freak on a Leash”, and it sounded as good as ever, hip-hop elements included. But clearly that specific nu-metal sound is now from a bygone era, a fact confirmed with the encore-opening song “4U”. That doesn’t mean that the songs themselves should be shelved, quite the contrary; it only drives the point home that Korn has evolved and in doing so, has kept themselves relevant in the metal genre.

The night came to a conclusion with two of the biggest hits in the evenings repertoire, “Coming Undone”, (which included a snippet of Queen’s “We Will Rock You”) and the 1999 monster hit, “Falling Away From Me”; finally culminating the affair with a massive confetti blast that engulfed the venue.

It’s not a misnomer that both Breaking Benjamin and Korn have had some issues over the years that have hindered their overall success; but, as time heals wounds, focus and maturity provide a catalyst to see life challenges more clearly and chase the demons away that have haunted you. Both of these bands have emerged from the darkness and recaptured that lost magic that helped each establish their brands in the formative years. Tonight’s show was one of the best performances we have witnessed from these two metal stalwarts to date. If you’re a fan of hard rock/nu-metal genre, takes some time and go catch a concert on this tour. The show is not perfect, but its damn close. 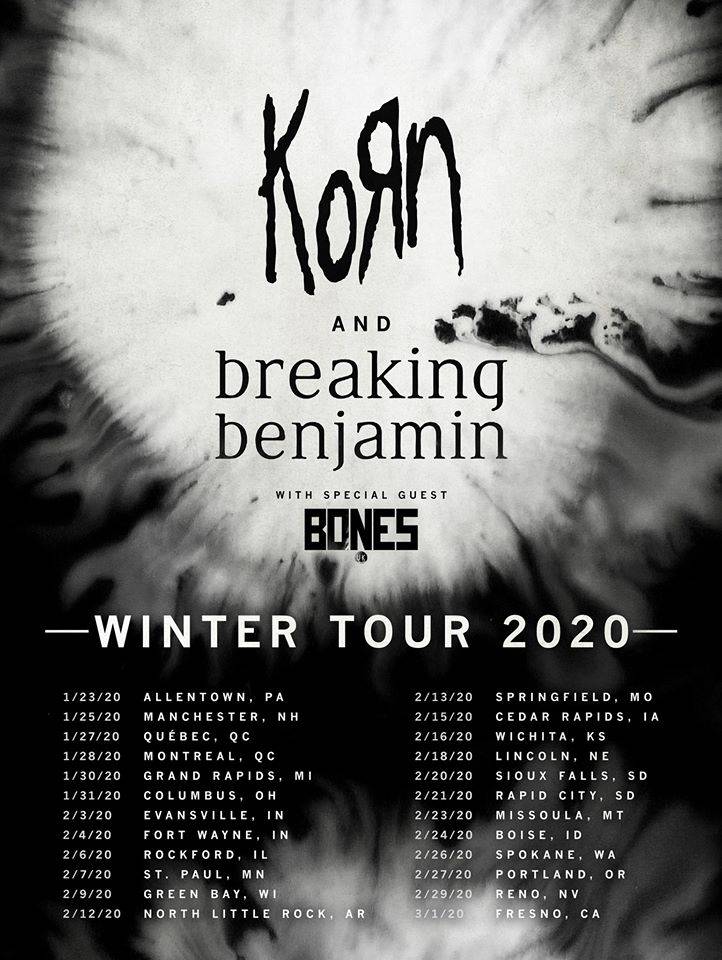