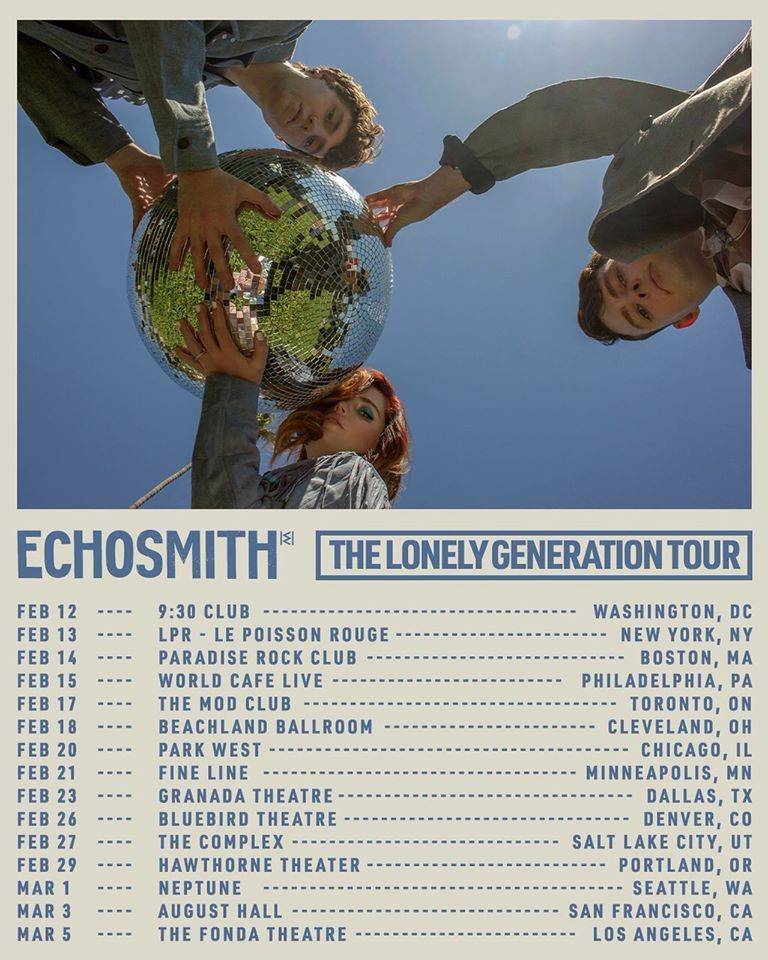 Cleveland, Ohio (February 18, 2020) – Echosmith at the Beachland Ballroom for the Lonely Generation Tour with special guests Jayden Bartels and The Weathers. California based Sierota family trio, Echosmith, fronted by Sydney (vocals), Noah (bass) and Graham (drums) found themselves arriving into a trendy area of town known as the Waterloo Art District of Cleveland, OH. This is Echosmith’s sixth show of the tour, supporting their second and latest studio album, Lonely Generation.

The new album, Lonely Generation, is about the journey of maturing and being true to one’s self. But as the show started, no one said you couldn’t have any fun, and just when Noah entered the stage, so did a flurry of bouncy balloons which made their way to the audience. Sydney and Graham followed and the show was underway.

Sydney, always with a smile, gave a warm welcome intro to the Cleveland crowd as the balloons danced between stage and audience. With the crowd cheering, a few of the balloons popped, showering confetti everywhere. Echosmith rolled right into the first song of the night, “Love You Better”, which is a pop rock song where verse and chorus are on a synchronized bounce between heavy guitar and piano. Rolling into the second song of the set, “Diamonds” deals with the materialistic grind to upkeep one’s reputation.

The crowd cheering, and with arms waiving, Echosmith rolled right into “Over My Head” and “Cracked”, which is a very different theme for the band. Prior to playing “Cracked”, Sydney preambles and dives into admitting internal faults exclaiming to the crowd in a sympathetic manner “we’re all cracked, but we let light in”. “Cracked” is a song that is deep-rooted and relatable; a song that soothes and gives the message it’s okay to hurt, and be imperfect.

Sydney kicks up the interaction by grabbing the tambourine and heads onto the bridge to play keys for the upbeat “Lost Somebody”. Sydney not skipping a beat, gets the audience to clap during the chorus. Up next was one of their staple early dance pop favorites, “Bright”, where Sydney continues with audience interaction by having everyone turn their cell phone lights on. From her perspective, what a sight to see, with tiny lights against an ocean of dark, swaying in sync to Echosmith’s music.

A short Interlude follows with Sydney talking about the Lonely Generation album. She talks about feelings of vulnerability, writing the songs together as a family, and playing together as family. A strong sense of family unity, all while we see Echosmith evolve, maturing and adding confidence into their stride. Last but not least, a surprise with their tour manager, as it was Linda’s birthday that night, turning 46!

Rolling right into “Everyone Cries” which is a beautiful piano ballad where Sydney and Noah duet. A song about nurturing and comforting those lost and heartbroken souls. A message that needs to persevere and endure. Next was “Follow You – Tell Her You Lover Her” with Sydney on acoustic. This song was written by Sydney for her husband, Cameron Quiseng, and was their first wedding dance. Next was “Scared to be Alone” is a realization that one’s thoughts can be unfriendly, scary, and even dangerous. This song reaches out to those souls, not to be afraid to reach out and talk to someone. Find that soulmate, and talk through the darkness.

Rounding out the night was “Last Forever”, “Talking Dreams” with Sydney dawning a blue umbrella and introducing the band, and “Don’t Start Now” with Sydney getting the audience to clap during chorus. “Stuck” was an audible treat for the eyes and ears being a triple drum effort of Sydney, Noah and Jacob. The encore songs were the self-titled name of the album, “Lonely Generation” which is an important, personal story to Sydney connecting to anyone feeling left out, not good enough, having sad feelings, and dealing with everyday struggles. Sydney exclaiming to the crowd, “there are lots of beautiful people out there, who are affected and this song is to let everyone know they are loved and are not alone.” And the finale being the quintessential triple platinum single from their first album, “Cool Kids” ended with another barrage of balloons and confetti to end the show.

Echosmith is a band that connects deep with their audience, a caring trio that sends a positive message, letting everyone know they are somebody special. An aura of sensitivity, devout caring, love and sympathy surrounds Sydney, all while having an endless smile. Echosmith has maintained their synth-dance-pop style, all while fine tuning their talents as a trio deep rooted in family values. Be sure to check Echosmith on their Lonely Generation Tour coming to a city near you. Oh, and happy birthday Linda!